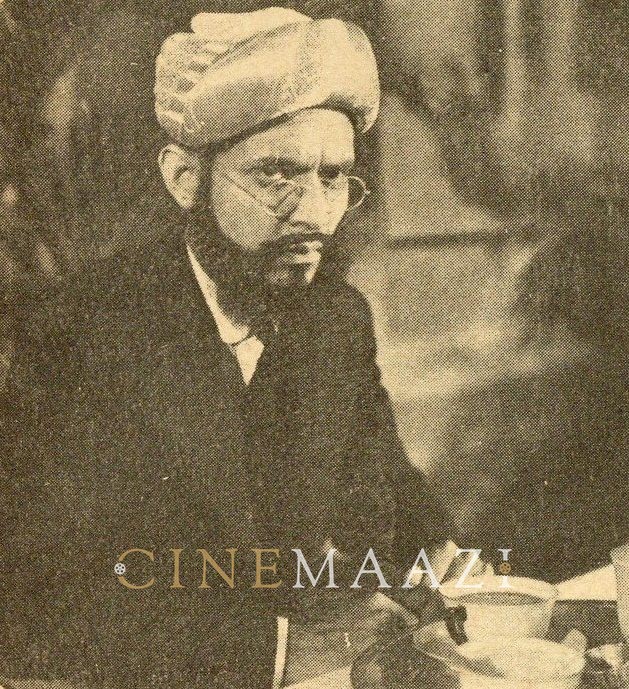 Kanhaiyalal as a Bohri barrister in Sagar Movietone's Service Ltd.
Character actor Kanhaiyalal, who's been in the industry for over forty years now and began his career as an extra in "Sagar Ka Shehr" and who won a lot of acclaims recently for his "Hum Paanch" – talks about his experience in the film industry...
He is still remembered for that widely acclaimed role of his in the 60's in the Dilip Kumar starrer Gunga Jumna (1961). Although Dilip Kumar was the driving force in the film, veteran Kanhaiyalal's performance as the kind-hearted Munshi eternally pursued by village dogs is still memorable.

Since then, he has appeared in many a film. But not until the recently released Hum Paanch (1980) did he show flashes of the old inimitable Kanhaiyalal. The public streamed out of the theatres full of praise for his effortless emoting while portraying the character of Lalaji. So I decided to go and meet this grand old man of our films.

The next day found me knocking at Mr Surinder (Hum Paanch) Kapoor's office door. I asked his help to locate Kanhaiyalal's house. "Why don't you ask Kanhaiyalal himself?" he asked smiling indicating an old man in white 'dhoti-kurta', sitting on the sofa immersed in his own thoughts. Devoid of his usual white moustache and the customary 'topi' so often seen in his films, Kanhaiyalal, looked anything but a film star.

I mentioned this fact. Kanhaiyalal smiled quietly. "I'm not surprised. In fact, very often I find myself facing two persons laying a bet as to whether I am Kanhaiyalal or somebody else."

I remembered that Kanhaiyalal had worked in the late Kundan Kumar's Anokhi Ada in a hilarious role as in ageing villager who keeps chasing young girls.
How did he like working with the late Kundan Kumar? Kanhaiyalal looked a little sad. "I am glad you started with the late KundanKumarji. He was one of the few directors with whom I had an excellent rapport. The others were Mahesh Kaul Saheb and R.S. Chowdhary. All three are now dead and gone. I wish they were still alive. They always got the best out of me. With Mahesh Kaul Saheb I worked in films like Sautela Bhai (1962) and Diwana (1967), Chowdharyji directed me in Gaali (1944). (Which was subsequently changed to Bahu Betiyan on the distributor's insistence and flopped eventually in the 50's)."

What about the late Mehboob Khan, who brought Kanhaiyalal into prominence with Mother India (1957)?

He clicked his tongue self-reprovingly. "I am sorry. I forgot to mention Mahboob Khan's name among the directors with whom I had good relations, on and off the sets. But I cannot forget that it was his faith in me which got me that memorable role in Mother India. The film's release brought me instant popularity and a lot of fans. Incidentally, I was the only artiste retained from Mehboob Khan's earlier hit Aurat (1940) which was later made as Mother India. All the artistes of the former film were replaced by new ones but when it came to me that he thought I was born to play that role. I can never forget that man. The experiences I shared with him are too deep-rooted for me to ever be able to erase them in a single life span."

Which was Kanhaiyalal's first film? Has he ever acted as the hero in any film?

"My first film was Sagar Ka Shehr, made in 1936 in which I had an extra's role. My first full-length role was the Shobana Samarth-Prem Adeep starrer, Sadhna (1939), where I played the hero's uncle. Why don't you ask the filmmakers why they have never even considered me for a hero's role? But one cannot entirely blame them because this whole film system in India is rotten. Here unlike abroad they can never accept an old man as a hero of a film!"

Did the release of Hum Paanch make any difference to this career?

"To a certain extent, People do congratulate me on my performance even before they wish me. Personally I had the strangest feeling during the shooting of this film that my role would turn out well but frankly I didn't expect such an overwhelming acknowledgement from the audience. The credit for this should go to the late producer-director Kundan Kumarji who suggested me to produce Mr. Surinder Kapoor when the latter was on the lookout for someone to play the role of the village Lalaji. Director Bapu must also be thanked for inspiring me to shine on screen. I would love to be directed by him again. Another film-maker with whom I would enjoy working again is Rajji (Raj Kapoor) in whose S.S.S (1978) I played a Catholic father.

He has some project in mind in which he has a good role going for me. The film is yet to be announced."

With this, the 71 year-old veteran paused to rest before continuing. Although I peered at him anxiously I didn't see any sign of tiredness or boredom on that famous face. He signed contemplatively and went on.

"If I had been choosy about the roles I did I would not have been in his line for so many years. Artistes like us cannot talk about being choosy. It is our 'majboori' to take almost every role that comes our way. Beggars can't be choosers. Given any role, a good artiste must tackle it the way a sculptor mould the clay in his hands. I am flooded with countless 'munshi' roles because film-makers tell me that fans want to see me in such roles. Although I have a few other notable performances to my credit, people only associate me with what remain in their minds after all these years. As luck would have it, even the recent Hum Paanch role is like that. Type-casting is one hell of a drawback in this line."

Diffidently, I finally broached the topic I'd been wanting to bring forward ever since the interview began. Was it true that Kanhaiyalal was a compulsive drinker? And did he know that a lot of directors had been complaining that he often came drunk on the sets and abused the studio hands without rhyme or reason?

I expected fireworks from him but all I got was a dead-pan look before he answered coolly. "Take it from the horse's mouth. Those who told you these things are people who don't want to see me in this industry. They must be having some enormous grudge against me, otherwise how can they come out with such terrific lies when I am always sober on the sets? I have been around for so long. There are enough people to vouch for me, not because they are my friends but simply because it is the whole truth and nothing else. Great men have had to put up with similar false stories about them. In the final analysis it is the artist's work that counts."
Had Kanhaiyalal eve experienced having his role chopped by superstars? He was quiet for a while I thought he hadn't heard my question but he was just framing a diplomatic answer.

"Please forgive me if I cannot answer your question frankly this time. I have my own reasons. But let me tell you this. All artistes are good in their way. Nobody can overshadow anybody. It greatly amuses me to hear today's youngsters coming out of cinema halls and comprising this and that actor's role and saying how so and so made 'chutti' of another. But this much I will say – I consider that actor a coward who cuts others' roles, and you can quote me on this."

Kanhaiyalal makes no bones about the fact that at present he continues working in films because of his 'lagao' for films but won't mind working even when 'majboori-ka-sawaal' will crop up. He has presently only three films being readied for early release in the coming months. One is the late Kundan Kumar's last film, completed recently, Ganga Jal where he has a running role throughout and which he expects once again to bring him appreciation form the cinegoers. The other two are Mera Qasoor Kya Hai in which he has a villain's role, and a Bhojpuri film.

After leaving this impressive old man, I kept thinking about how the character artiste of Gunga Jumna and Mother India is still going strong. Kanhaiyalal is still counting the pebbles on the sea-shore of art and one who'll one day inspire future film aspirants to glory in terms of cinematics, if nothing else.