The World is selfish: Every one is trying to kill others for a little profit. Each one would cut throat of others. But "JAISINGH" a prince of Malva State was an exception.

Lust for gold and craze for power are queer elements in man's nature and no wonder that Rudrasingh falls an easy victim of these human weaknesses. Ignoring all the sentimental appeals of his devoted wife who brought up "JAISINGH" from childhood and was treating him more than her own son, Rudrasingh with the help of his commander made a plot to kill "JAISINGH", thus so achieve his evil desires.

Swash-buckling, self sacrificing "JAISINGH", left the state, only to please his cruel and greedy uncle, who had an eye on the throne.
Aimless but thoughtful "JAISINGH" entered the Magdha State. There he faced a group of robbers who had captured PADMINI - a beautiful belle, the princess of Magdha State. She was rescued by "JAISINGH" and escorted to the Palace. As the luck would have it, she fell in love with him, both were happy to find themselves into their little world known as "Lovers Paradise".

"JAISINGH" got shelter in the house of Randhir, an old crippled but honest warrior. Kalindhi, his charming young daughter for whom "JAISINGH" had developed soft corner and loved her like his sister, misunderstood his pure love and sincere thought. She was prepared to do anything, sacrifice all that she had, but "JAISINGH", whom she loved from the core of her heart.

Hearing sad and panicky news of the King of Magdha State being missed from the War front, "JAISINGH" who wanted to join the army, managed to rescue the King from the Dark Fort, where he was imprisoned by the Traitors. Thus "JAISINGH" became hero of the Whole State.

Kalindhi, furious and jealous became mad. She was not prepared to sacrifice her love and creates misunderstanding between two love birds and expresses her desire to "JAISINGH".

On the other hand, suspecting "JAISINGH's" chastity and poverty, Rudrasingh who wanted to put an end to "JAISINGH's" life, sent his commander who was successful to get "JAISINGH" arrested.

Meanwhile, to the utter disappointment of all, PADMINI was kidnapped by the commander of the State, who had set his mind to marry PADMINI.

Kalindhi, got back on her nerves, her womanly love in her came out breaking all bounds. She was ready to sacrifice her life but to save "JAISINGH". Her emotions an burning desire to achieve him turned in the true spirit of womanhood, who knows how to die in love.

How about "JAISINGH"?... Was he saved by Kalindhi? What was the fate of Kalindhi? Was Padmini rescued? Whether Rudrasingh triumphs over his evil desires? FOR ALL THESE QUESTIONS... WAIT AND WATCH FOR YUR REPLY ON THE SILVER SCREEN. 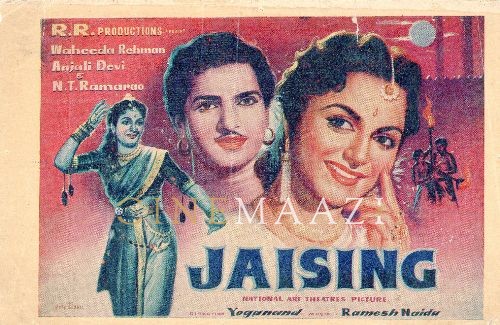