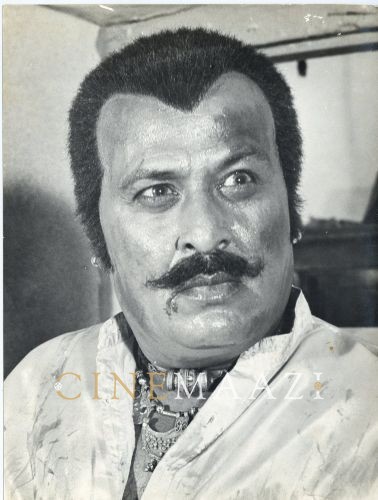 A skilled dancer and musician, Joginder’s passion for playing the dhol and doing bhangra was so overwhelming that he failed to find interest in his family’s business, choosing instead to remain immersed in song and dance. The Punjab Association in Mumbai often invited him to the city to perform. Joginder always enthusiastically soaked in the star-studded world of Mumbai before he returned to Punjab.
Joginder hailed from Khanewal in Pakistan, where he was born on 04 July 1949. Whenever he visited Mumbai, he made sure to meet his friend from school, the film director and actor Manoj Kumar. On one such occasion, he mentioned to him that he yearned to work in films. To fulfill Joginder’s wish to see himself on screen, Manoj Kumar offered him a small role in his film Purab Aur Paschim (1970).
Once he had had a taste of the film world, Joginder decided to move to Mumbai and start looking for further opportunities in cinema. He managed to secure roles in a few films, but misfortune seemed to dog his footsteps. Work on one of the films stopped midway, while another could not be released. He managed to appear on screen once again in Bachpan (1970) and Heer Ranjha (1970), but did not make much of a mark with his brief stint in both.
Not one to be discouraged by a few failures, these false starts only made Joginder more determined to establish himself in cinema. Ultimately, he decided to produce and direct films himself in order to act in them. His first such film was Bindiya Aur Bandook (1973). The masses used to filling the lower-priced front seats thronged to the theatres to watch this film, proving it a hit.
Joginder’s next venture was the film Do Chattane (1974), but it was only with the release of Ranga Khush in 1975 that he finally found his niche within the industry. As the daku Ranga, he unleashed an image of terrible monstrosity unparalleled by any actor before this.
By this time, his interest in music had diminished somewhat but not completely disappeared: he was also one of the playback singers for Ranga Khush. The success of Ranga Khush was such that Joginder is remembered for it to this day.  Following this, he also directed Fauji (1976) and Yaari Zindabad (1976), which were average hits.
Enthused by these triumphs and placing great faith in his technicians, Joginder embarked on an ambitious project and started work on six films simultaneously. Unfortunately, of these only Pandit Aur Pathan (1977) enjoyed a moderate amount of success.
Joginder had no qualms regarding his acting prowess or his films not being taken seriously. He only wanted to do what he enjoyed on the screen, and this he did often. He had carved out a specific audience for his films among the masses, and these loyal fans waited with bated breath for his new releases. Their loyalty meant that he continued to appear on screen in a number of films. Joginder also extended his generosity to many others. He granted opportunities to people like Vikram, Ramesh Sharma, Dheeraj Kumar, Kiran Kumar and Billu Chaudhary, who were struggling to enter the film industry. Joginder passed away on 14 June 2009 in Mumbai.