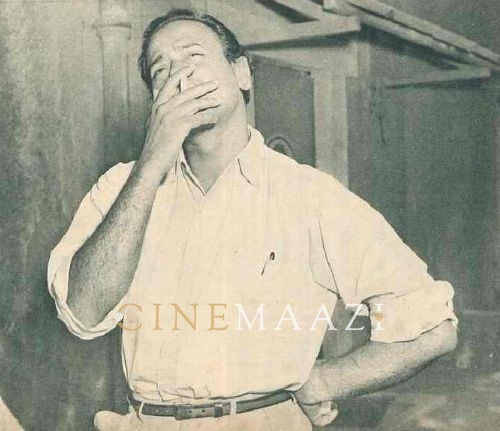 Active in Hindi and Bengali cinema, Abhi Bhattacharya is best remembered for his roles in films in the 1950s and the 1960s, such as Yatrik (1952), Jagriti (1954), Anuradha (1960) and Subarnarekha (1965). Over the span of his illustrious career, he worked with prominent filmmakers such as Ritwik Ghatak, Guru Dutt, Bimal Roy and Satyen Bose. He made his film debut in 1947 with the Bombay Talkies’ film Naukadubi. Based on a novel by Rabindranath Tagore, it was directed by Nitin Bose. In the course of an acting career spanning four decades, he appeared in more than 150 films in Hindi and 21 in Bengali. He also went on to act in several mythological films. While he essayed the role of Lord Vishnu in films such as Tulsi Vivah (1971), Kisaan Aur Bhagwan (1974) and Hari Darshan (1982), he played Krishna in Mahabharat (1965). He also won the Filmfare Best Supporting Actor Award for Jagriti (1954).

Born on 20 November, 1921 in a village near Rajshahi of undivided Bengal, he hailed from a landed family. After his mother’s demise, he was sent to Gaya, to the household of his wealthy maternal uncle in order to acquire a better education. It was his aunt who sparked in young Abhi a passion for music, poetry and drama, especially that of Tagore. Despite being a bright student, he decided to pursue his interest in cinema instead. After graduation, he left for Calcutta, a film hub; however, failing to find a break in films, he returned to Gaya and went on to join an American air base. He was initiated into the film industry when he was asked by producer Hiten Chaudhuri to come to Bombay.In Bombay, he attended a screen test and went on to be chosen as the leading man of Bombay Talkies’ film Noukadubi (1947). Based on a Tagore novel, an earlier Hindi version of the film had featured Dilip Kumar.

Post his debut, Bhattacharya shifted to Calcutta, where he acted in a few lead roles, none of great significance. During the Partition that ensued, his father lost practically everything and had to move to Calcutta with many dependents. Better film opportunities beckoned with B N Sircar of New Theatres inviting Bhattacharya to act in the double version film Mahaprasthaner Pathe/ Yatrik (1952). In the 1950s and 1960s, Bhattacharya was sought after by leading directors and producers, especially in Bombay. He was cast opposite actresses such as Kamini Kaushal, Madhubala, Geeta Bali, Mala Sinha and Madhabi Mukherjee, starring in films such as Bimal Roy’s Biraj Bahu (1954), Satyen Bose’s Jagriti for which he won a Filmfare award, Parichay (1954), D N Madhok’s Naata (1955), Guru Dutt’s Sailaab (1956), Asit Sen’s Apradhi Kaun (1957), Ritwik Ghatak’s Subarnarekha (1965) which is considered a Bengali classic, and Hemen Gupta’s Netaji Subhas Chandra Bose (1966). Through the 1960s and early 1970s he continued acting in several famous movies – such as Dosti (1964), Aradhana (1969), Seema (1971) and Amar Prem (1971). His roles in Biraj Bahu and Jagriti were praised by audiences.

Bhattacharya’s life experienced another turning point in 1971 after his interaction with Amiya Roy Chowdhury of Calcutta, who had become famous as the spiritual guru Dadaji. Several prominent members of society were drawn to Dadaji, as was Bhattacharya. In fact, Bhattacharya’s flat at Carter Road, Bandra became a meeting place and rallying point for followers of Dadaji for nearly two decades thereafter. He himself became a companion to Dadaji, helping spread his teachings, as well as following them in his own life. He also prepared the manuscript of his book Destiny with Dadaji, which was edited by Ann Mills, who also made it public online.

In his illustrious career he worked with legends such as Bimal Roy, Ritwik Ghatak, Shakti Samanta and Satyen Bose. His lead performance in Ghatak’s Subarnarekha (1965) earned him great acclaim, while the film itself is widely regarded as one of the best films ever made. He also acted as the lead in Debaki Bose's Tamil film Ratna Deepam (1953). One of the most recognisable character artists of Indian cinema, he wont on to act in 166 films in his career.

During this phase he acted in several mythological films such as Harishchandra Shaibya (1983) and Hari Darshan (1983). His last film was Professor Ki Padosan (1993). Despite his talent and versatility, he did not perhaps fully realise his potential. This could have been owing to multiple reasons such as his sober acting style, the vanishing of idealism in cinema, and also his own lack of ambition. Facing adversities minus a show of bitterness, he was luminous as a saintly artiste, no less.