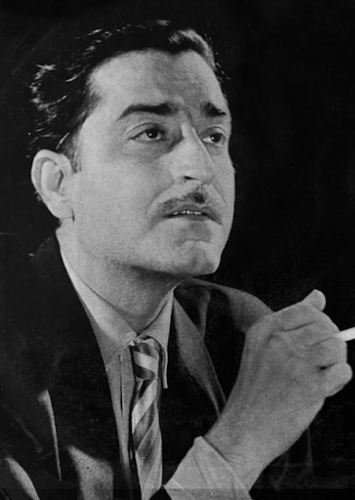 Deep and melodious-voiced singer-actor C H Atma was known for his singing style that was heavily influenced by that of the famous K L Saigal. Making his singing debut in 1945 with the song Preetam aan milo for a private album, he rendered songs for films such as Nagina (1951), Aasmaan (1952), and Geet Gaya Pattharon Ne (1964). He also featured onscreen as an actor in the films Bhai Saheb (1954) and Bilwamangal (1954) and sang duets with singers such as Geeta Dutt, Lata Mangeshkar, and Asha Bhosle. The first singer from India to tour and sing outside India; he had performed in Nairobi, East Africa in 1957, a once in lifetime occurance. His film songs were equally popular as his non-film geets and ghazals as he was perhaps one of the few singers whose career as a film and non-film singer flourished simultaneously.

Born as Atma Hashmatrai Chainani in 1923, in Hyderabad (Sind), now in Pakistan, his father, Hashmatrai Chainani was a well-known lawyer in Karachi with a fondness for music, which passed on to the children; both, Atma and his younger brother Chandru Atma would go on to become singers. A fan of the legendary K L Saigal who was a rage at the time, he would render only Saigal songs. He did it purely for leisure, with no thought of making it his career. Singing became more than a leisurely pursuit during a visit to his aunt’s house in Lahore during the vacations. People there became so impressed by his singing that he was invited to stage programmes to render K L Saigal’s numbers, as his rich baritone voice bore a distinct resemblance to the voice of his idol. Such was the success of his stage shows that his fame grew in Lahore, resulting in recording company HMV recording a song in his voice. Composed by O P Nayyar, it was titled Preetam aan milo…dukhiya jiya bulaaye. It was during this time in 1945 that he also changed his name to C H Atma. The song also led to him bagging his first film assignment.

Filmmaker and distributor Dalsukh Pancholi, who had moved to Bombay post-partition, was so impressed by Atma’s voice in Preetam aan milo that he tracked him down and arranged for him to come from Calcutta to Bombay to record for his film Nagina (1951). Atma rendered three solos for the film scored by music director duo Shankar-Jaikishan. All three songs, namely Roun main sagar ke kinare, Ik sitara hai akash mein, and Dil beqarar hai mera were well-received. The following year Atma sang three songs for the O P Nayyar-scored Aasmaan (1952), namely Iss bewafa jahaan mein, Raat suhani hanste tare, and Kachha samajh nahin aaye.

Atma went on to be presented as a hero by Pancholi in the film Bhai Saheb in 1954. Paired opposite Poornima and Smriti Biswas in the film, he rendered 8 songs composed by music director Ninu Mazumdar. The same year he also starred opposite Suraiya in the film Bilwamangal (1954), for which he sang six songs composed by Bulo C Rani. Neither of these films met with grand success at the box office. He simultaneously performed at stage shows and for private albums, also becoming the first Indian to perform out of the country in 1957, when he did a show in Nairobi. He gained a wide circle of admirers with his frequent performances, both in India and abroad. His melodious, deep and rich voice was ideally suited for geets, ghazals and also bhajans.

Ironically, the similarity of his singing voice to K L Saigal’s also became a bane, as the latter became obsolete. Thus Atma too was considered by some to be unusable for playback at the very beginning of his career. He did however go on to sing a song each in films such as Mahatma Kabir (1954) scored by Anil Biswas, Dhake Ki Malmal (1956) composed by O P Nayyar, and Jahaazi Lutera (1957) composed by Bulo C Rani. He played Omar Khayyam in the V Shantaram directorial Geet Gaya Pattharon Ne (1964) for which he also rendered two songs, namely Mandve tale gareen ke, and Ik pal jo mila hai tujhko which were scored by music director Ramlal. Post this film, his career in films drew to a close.

Atma fell ill on his trip to London in 1975 for a show. His unsuccessful married life had also impacted his well-being. His health did not improve even after he returned from London, and after an 8 month-long period of suffering, he passed away on 6 December, 1975 at the age of 52.