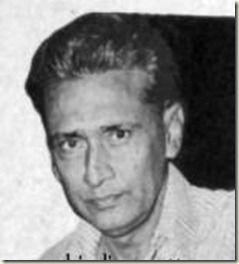 A composer whose music far exceeded the potential of the films he worked in, C Arjun was a supremely talented artiste of the 60s and 70s.

C Arjun was born on 1 September, 1933 in a Sindhi family. His family migrated to Baroda after the Partition. His father who was a singer, imparted musical training to him. He began his career in the film industry as an assistant to composer Bulo C Rani. His first project as a music composer was the Sindhi blockbuster Abana (1958). His debut in Hindi cinema was Road No 303 (1960). He composed music for Dharam Kumar’s Main Aur Mera Bhai (1961). The songs In pyaar ki rahon mein and Bhai re bhai from Punarmilan (1964) earned him praise from music lovers. He went on to compose music for films like Punarmilan (1964), Ek Saal Pehle (1965), Chale Hai Sasural (1965), Sushila (1966), Lamboo in Hongkong (1967), Murder on Highway (1970), Mangu Dada (1970) and Guru Aur Chelaa (1973). Though his repertoire included mostly B films, he proved his mettle as a composer through popular songs like the memorable ghazal Paas baitho tabiyat bahal jayegi (Punarmilan), Main abhi gair hun (Main Aur Mera Bhai), Gham ki Andheri raat mein (Sushila), Peene wale meri ankhon se and Jitni haseen ho tum utni hi bewafa (Mangu Dada). He was particularly proud of the Rafi sung Paas baitho tabiyat bahal jayegi.

The biggest success of his career was the surprise blockbuster of 1975 – Jai Santoshi Maa. The Usha Mangeshkar song Main to aarti utarun re from the film attained great popularity. He went on working through the 70s and early 80s in films like Rakshaa Bandhan (1976), Love in Kashmir (1976), Subah Zaroor Aayegi (1977), Nawaab Saaheb (1978), Kanoon Aur Mujrim (1981) and Sant Rohidas (1982).  The song Sham rangeen hui hai from Kanoon Aur Mujrim also became quite popular. His last film was Sati Naag Kanya (1983).

He passed away on 30 April, 1992 after suffering a cardiac attack at a recording studio.