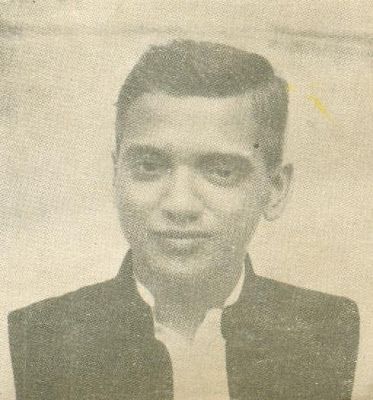 Young and brilliant Hindustani classical vocalist, Pandit Dattatreya Vishnu Paluskar’s devotional and classical renditions, representative of the rich heritage of Gwalior, remain unmatched. Creating a sensitive and balanced synthesis, his singing was systematic, pristine, and effortless, reflecting the result of self-reflection, practice, and training, developed over long hours of application. He sang for just two films—a duet with Ustad Amir Khan in the film Baiju Bawra (1952) and for the Bengali film Shaap Mochan (1955), before he was snatched away by encephalitis, aged 35.

He was born Dattatreya Vishnu Paluskar on 28 May, 1921. His father Vishnu Digambar Paluskar was a famous Hindustani musician. Incidentally, the family’s original surname was Gadgil, but as they hailed from the village Palus, near Sangli, they came to be known as the Paluskar family. The Paluskars hailed from a family of Haridasis, or performers of the Hindu epics, enjoying the patronage of Southern Maharashtra’s feudal chiefs. However, Dattatreya Vishnu’s father V D Paluskar declined the patronage of the courts and instead worked towards systematising music education and support for artists. One result of his endeavours was Gandharva Mahavidyalaya, a chain of music schools which is now a full-fledged university.

Showing brilliance at a young age, Dattatreya was considered a child prodigy. His skill was partly nurtured by his father Vishnu Digambar Paluskar’s own hard work and fame. Just 10 when his father passed away, he went on to be later trained by senior disciples of his father, Pandit Vinayakrao Patwardhan and Pandit Narayanrao Vyas in Bombay and Pune, as well as his elder cousin Pandit Chintamanrao Paluskar and Pandit Mirashi Buwa.

Just 14 when he gave his debut performance at the Harvallabh Sangeet Sammelan in Jalandhar, Punjab, his reputation as a rising artist was established. He soon went on to perform all over the country at most major music festivals. Inheriting the Gwalior gharana and the Gandharva Mahavidyalaya, Paluskar however remained open to adopting suitable aesthetic features of other gharanas and styles. He also broadcast from various stations of All India Radio regularly from 1938 onwards.

On stage, he rendered all the main Gwalior ragas and traditional compositions. The consistent quality of his performances earned him tremendous respect, as he created a sensitive and balanced synthesis. His singing was systematic and pristine. While he was stylistically mature, his sweet voice also mirrored his own youthfulness. His effortless singing reflected the synthesis of self-reflection, practice, and training, developed over long hours of application. Never donning jewellery on stage or interrupting a performance to share his views, he remained unaffected as a performer, reflecting his own personality and lifestyle. He remained unwavering from his honesty and discipline, and his sense of what was right and appropriate. Known for never bargaining for his fees, and often performing for free and for singing for charities, he also replied to every letter he received for which he had expressly purchased a typewriter.
Pandit D V Paluskar’s bhajan renditions were unmatched. His Chalo man Ganga Jamuna ke teer captured a depth of feeling that many renowned singers couldn’t match, while his other bhajans Payo ji maine, Thumak chalat ramchandra, and Raghupati raghav rajaram became very popular through the release of his 78 rpm recordings.

D V Paluskar rendered songs for just two films. The first was his duet with Ustad Amir Khan in the film Baiju Bawra (1952), titled Aaj gawat man mero. Apparently, Ustad Amir Khan himself had recommended D V to music director Naushad, to compete with him in the famous contest between Baiju and Tansen staged in the film. Despite being very young compared to Ustad Amir Khan, Paluskar acquitted himself admirably. He also had to lower his singing scale by a whole note in order to match that of the Ustad. Paluskar also rendered the song Kaliyan sang karat rang raliyan for the Bengali film Shaap Mochan (1955).

This foremost vocalist of the Gwalior gharana passed away due to encephalitis on 26 October, 1955. He was 35. He was survived by his wife and two children.