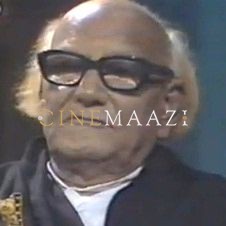 A legendary Punjabi composer and music director of Pakistani cinema Baba Ghulam Ahmed Chishti, has the distinction of being one of the founders of Pakistani film music. He was a film music director, lyricist and playback singer. G. A. Chishti, firmly grounded in the Punjabi “Ang”, excelled at Punjabi compositions and was apt at creating a unique blend of influences Punjabi music. Due to his popularity and venerability, he was often called Baba Ji in the film industry.

G. A. Chishti was born on 17 August, 1905 in Gana Chor, a small village in Jalandhar District (Punjab). Chishti was fond of music since his childhood and he used to sing naats at the time of prayer in his school. His intense love for music and talent was noticed by famous writer Agha Hashr Kashmiri. He asked Chishti to assist him with his work with a salary of Rupees fifty per month. Under the tutelage of Agha Hashr, Chishti learnt the intricacies of the music. After the demise of Agha Hashr, Chishti joined a music recording company and started composing music independently. He got the opportunity to record/compose music in the golden voices of Jaddanbai and Amirbai Karnataki. G.A. Chishti introduced Noor Jehan to the Lahore stage when she was merely nine years old.

Baba Chishti started his film career by composing music for the film Deen-o-Duniya in 1936. The music of this film became very popular and R.L. Shorey offered Chishti Sahib to compose music for the Punjabi movie Sohni Mahiwal (1938). Thereafter, Chishti ji moved to Calcutta where he composed music for several films especially those produced under the banner of R.C. Talwar Productions. Under this banner, he composed music of two hit Punjabi films Chambey Di Kali and Pardesi Dhola (1941). He also composed music of another Punjabi movie Mubarak (1941). He became known for his compositions both in Urdu/Hindi and Punjabi languages. In 1944, the Censor Board banned his composition for the song Aik shehr ki londiya from the film Shukriya (1944). He had composed music for 13 Urdu/Hindi films like Deen-o-Duniya, Pap ki Nagri, Khamoshi (1942), Manchali (1943), Kaliyan (1944), Shukriya (1944), Albeli (1945), Zid (1945), Yeh hai zindagi (1947), Jugnu (1947), Jhooti Qasm (1948),  Do Baten (1949), Nai Bhabhi (1950) and four Punjabi films (Sohni Mahiwal, Chambey Di Kali, Mubrak and Pardesi Dhola (1941)) before migrating to Pakistan in 1949.

After reaching Pakistan, G. A. Chishti initially composed music for three films Sachai,  Mundri and  Pheray. In fact, six songs of Pheray (1949) film were written, composed and recorded in a single day. Pheray became a blockbuster and earned plaudits for Baba Chishti. In 1955, Punjabi film Pattan became a musical super-hit and it boosted his career. He became a much-sought-after music director. He was the music director for Pakistan's many early jubilee hits like Sassi, Noukar, Dulla Bhatti, Yakke Wali, Billo, Guddi Gudda, Miss 56, Abroo, Rishta and Chann Tara etc.

G.A. Chishti had a very long and successful career. During his career spanning five decades, he scored music for 157 films out of which 140 were Pakistani Urdu/Punjabi films. He had composed almost 5000 tunes. He possessed a poetic skill and he had written lyrics of 12 popular Pakistani film songs besides hundreds of others. Music directors Rehman Verma and Khayyam learnt classical music under the tutelage of G A Chishti. He had introduced many film playback singers like Noor Jehan, Zubaida Khanum, Saleem Raza, Naseem Begum, Nazir Begum, Mala, Masood Rana and Pervez Mehdi.

Ghulam Ahmed Chishti was awarded Pride of Performance for Arts for his distinguished service to Pakistan in the field of music in 1989 by the President of Pakistan.
He died due to a heart attack on 25 December 1994 in Lahore.