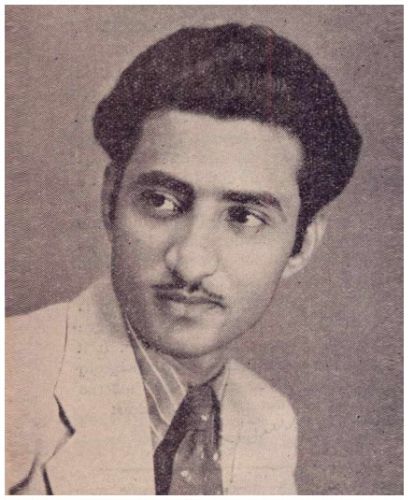 Popular playback singer in Hindi films in the 1940s and 1950s, Ghulam Mustafa Durrani, or G M Durrani, as he was widely known, was a multifaceted talent. Also a radio artist, actor, and music director, his fame was such in the early 1940s that the then aspiring singer Mohammed Rafi considered Durrani his idol. He rendered duets with the leading artistes of his time, including Shamshad Begum, Amirbai Karnataki, Asha Bhosle, Geeta Dutt, and Rafi. He also carved his own identity as a playback singer, with a voice that had sweetness, even if it lacked range.

Born in Peshawar in 1919, he was a Pathan belonging to the Mohammad Zahid Durrani Kabila. Fond of music since childhood, he moved to Bombay when he was approximately 16. Discovered by filmmaker Sohrab Modi, Durrani made his debut in 1936 with the historical film Saaed-e-Hawas. With music scored by classical musician Bundu Khan, popularly known as Taan-Talwar Bundu Khan, Durrani rendered a ghazal Maston ko shem farz hai peena sharab ka.

When the concept of playback singing began, he lent his voice for Sagar Movietone’s Bahurani (1940), which had music scored by Rafiq Ghaznavi. At the time, Durrani was working as a full-time artist with AIR (All India Radio). AIR artists were not permitted to do private recordings at the time, but on Rafiq Ghaznavi’s insistence, Durrani agreed. He did, however, lay down conditions such as that the recording should take place on a Sunday night to avoid outsiders entering the studio, and that the credits should not feature his name. Thus did Durrani render the duet with the Anglo-Indian singer Miss Rose, for which he was paid Rs.75. Considering that his monthly salary at AIR was Rs.70, playback singing was clearly the more attractive proposition. In December of 1940, Durrani quit his job at AIR.

In the year 1941, he sang for the Naushad-scored film Darshan (1941), rendering three songs. He went on to sing four songs for Nai Duniya (1942), of which Aaj mera man dole and Dil loot liya ji kisne became widely popular. He also worked as an assistant music director on this film.

As his popularity grew, he went on to sing for several well-known music directors such as Khurshid Anwar, Naushad, Shankar Rao Vyas and A R Qureshi (Alla Rakha). Such was his popularity between 1941 and 1951, that he sang approximately 500 songs in this period. Among the many films he rendered playback for are Mirza Ghalib (1954), Humlog (1951), Magroor (1950), Shama (1946), Namaste (1943), Sabak (1950), and many more. Several singers also began their careers with Durrani, who was an inspiration to many. In 1944, Mohammed Rafi recorded what he considered his first Hindi language song for Gaon Ki Gori (1945) - Aji dil ho kaaboo mein with G M Durrani, on the latter’s recommendation. Geeta Dutt also started her career with a bang, rendering Aaj preet ka naata toot gaya with Durrani for the film Do Bhai (1947).

G M Durrani was also a senior Punjabi singer-actor at the time. Some of his popular Punjabi songs include his duets with Shamshad Begum - Mela do din da, and Akhiyan wich akhiyan rehan de from Lara Lappa (1953). He also rendered Hindu as well as Muslim devotional songs.

Venturing into music direction in the early 1940s, Durrani had assisted music director Naushad Ali, on Nai Duniya (1942). He went on to compose the music for Hindi films such as Angoori (1943), Vijaylaxmi (1943), Bhagyalaxmi (1944) and Dhadkan (1946). He used his full name Ghulam Mustafa Durrani in the credits. Using the pseudonym Gunjan, he also scored the music for Kismat Palat Ke Dekh (1961) and State Express (1961).

Durrani’s career saw considerable success approximately lasting from 1943 to 1951. By the 1960s, singers such as Rafi, Mukesh, Manna Dey, Talat Mahmood, and Kishore Kumar had got established. Work dried up. The tables had turned and it was Rafi who would now recommend G M Durrani to O P Nayyar for the song Humko hanste dekh zamana jalta hai (Hum Sab Chor Hai, 1956). Yet, despite the changed circumstances, he still went on to render approximately 60 songs in 45 films post 1951.

In the 1960s, he sang for films such as State Express (1961), Sunehre Kadam (1966). The last film he sang for was Lal Patthar (1971), rendering the Quran khani in the social drama starring Raj Kumar, Hema Malini and Raakhee.

On the personal front, Durrani had married singer-actress Jyoti, whose actual name was Sitara Begum. Jyoti was the younger sister of actress Wahidan, who is the mother of popular 1950s actress, Nimmi. His last years were lived in strained conditions. One highlight was his being invited to sing at the programme to felicitate famed singer Noorjehan who had visited India in 1982. Durrani rendered his popular hit song Neend hamari khwab tumhare from Nai Kahani (1943). This programme was also telecast on Doordarshan. A month later, Durrani was struck by throat cancer.