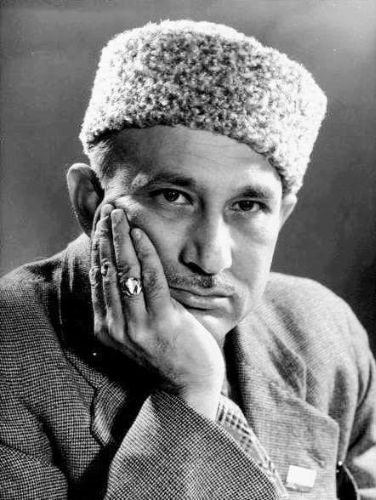 There have been many writers who have focused on socio-economic concerns through the filmic medium, but none have left a bigger impact than K.A. Abbas. A man of impressive range, K.A. Abbas was credited with numerous innovations, from major leaps in the journey of realism in Indian cinema to the iconic tramp-figure of Raj Kapoor.

K.A. Abbas was born in Panipat on 7 June 1914 in the house of the legendary Urdu poet Khwaja Altaf Hussain Hali, a former student of Mirza Ghalib. His grandfather Khwaja Gulam Abbas is rumoured to be one of the martyrs of the Battle of Panipat. His father Ghulam-Us-Sibtain was a successful businessman, while his mother Masroor Khatoon was the daughter of the reformer and educationist Khwaja Sajjad Hussain, a staunch supporter of education for women. Abbas graduated with an LL.B. from Aligarh Muslim University in 1935. He started working on a Delhi newspaper National Call in 1933. He became the political correspondent and film critic for the Bombay Chronicle (1935-47). He wrote the political column Last Call for the Chronicle and later in the Blitz. His experience of participating in the struggle for independence had a profound influence on his principles.

Abbas was one of the founding members of the Indian People’s Theatre Association (IPTA) during the Quit India Movement. The group brought together a large number of leftist artistes, many of whom would later join the film industry. His journey in cinema began in 1936 as a part-time publicist for Bombay Talkies. He sold his first screenplay Naya Sansar (1941), which was an autobiographical work, to Himanshu Rai and Devika Rani.

The year 1946 was a landmark year for both Abbas and Indian cinema. V Shantaram directed the hugely successful film Dr. Kotnis Ki Amar Kahani, based on Abbas’s book And One Did Not Come Back. In the same year, he wrote the screenplay for Chetan Anand’s Neecha Nagar which won the Grand Prix Award at the Cannes Film Festival. He made his own directorial debut with Dharti Ke Lal based on the influential IPTA play Nabanna by Bijon Bhattacharya and the story Annadata by Krishan Chander. Both Neecha Nagar and Dharti Ke Lal were milestones in the history of realism in Indian cinema and are considered to be precursors to the Indian New Wave.

This sparked off a period of immense productivity for Abbas. During this time, he became known for his collaborations with Raj Kapoor which have taken on iconic status in the memories of cinema lovers. These included the films Awara (1951), Anhonee (1952), Shree 420 (1955) and Jagte Raho (1956), all known for tackling with verve social issues of poverty and disenfranchisement. K.A. Abbas was thus instrumental in adapting the Chaplinesque Tramp figure that Raj Kapoor became famous for.

In 1951, Abbas set up his own production company Naya Sansar. Under this banner he would produce films such as Rahi (1953), Munna (1954), Shehar Aur Sapna (1963), Aasman Mahal (1965), Bambai Raat Ki Baahon Mein (1968), Saat Hindustani (1969) and Do Boond Paani (1971). Themes such as urban poverty and corruption (Jagte Raho, Shehar Aur Sapna), scarcity of water (Do Boond Pani), exploitation of workers (Rahi) and the anti-colonial struggle (Saat Hindustani) featured heavily in these films. Shehar Aur Sapna won the National Film Award for Best Feature Film. Many of Abbas’s films found acclaim and success internationally.  Awara and Rahi received tremendous adulation in the USSR. He directed the first Indo-Soviet co-production, the grand historical Pardesi (1957) which was nominated for the Palme D’Or at the Cannes film festival. Both Saat Hindustani and Do Boond Paani were awarded with the Nargis Dutt Award for Best feature Film on National Integration. Unfortunately, despite national and international acclaim, his films failed to be popular successes.

His collaboration with Raj Kapoor continued throughout his prolific career. K.A. Abbas was so close to the filmmaker-actor that the latter once expressed his undying love and devotion to Abbas while inebriated, to the amusement of the eavesdropping house staff. Abbas wrote the script for Kapoor’s magnum opus Mera Naam Joker (1970), and was one of the writers for the iconic teenage romance Bobby (1973). Kapoor’s dream project Henna (1991) was also written by Abbas, one of his rare films to have a Pakistani actress (Zeba Bakhtiar) as the lead. The film was released posthumously. He is also noted for giving future megastar Amitabh Bachchan his debut role in Saat Hindustani, which also featured the Malayalam star Madhu in his first Hindi role. In his later career, Abbas would became a prominent documentary filmmaker as well. The documentaries Flight to Assam (1961), Tomorrow Shall Be Better (1965) and Char Sheher Ek Kahani (1968) display his commitment to social causes. Parallel to his film career K.A. Abbas remained an eminent writer and journalist in Hindi, Urdu and English earning him numerous state awards including the Ghalib Award in 1983. He was awarded the Padma Shri in 1969 for his immense contribution to the arts.

K.A. Abbas was known for his generosity throughout his career. As a popular anecdote goes, friends and unit members would often walk away with his clothes or books. For the former, he considered his property to belong to everyone else, and the latter, he thought, was no theft at all! Years later, when he wanted copies of some of the seventy three books he had written, he appealed to his friends and relatives to return them. Unfortunately, he only received three or four of them. A humble man despite his overwhelming success, he preferred to travel in crowded public transport.

Many of his cinematic works are associated with the Nehruvian notion of nation-building, but also contain a leftist critique of the same. A conscientious artiste, he remained committed to the principles of secularism and equality. His commitment to these ideals was always uncompromising. In an interview with Rajiv Gandhi, the then Prime Minister of the country, he went so far as to offend him with direct questions about the authoritarian rule of his mother and her policies regarding national development. His profound humanism has left an indelible mark on the Indian screen. K.A. Abbas passed away on 1st June, 1987 after a prolonged battle with failing health.

Abbas, Anwar. "Tribute: KA Abbas, the filmmaker who said, 'Whatever I own belongs to everyone else', scroll.in, July 28, 2019, https://scroll.in/reel/931989/tribute-ka-abbas-the-filmmaker-who-said-whatever-i-own-belongs-to-everyone-else (Accessed June 01, 2020)