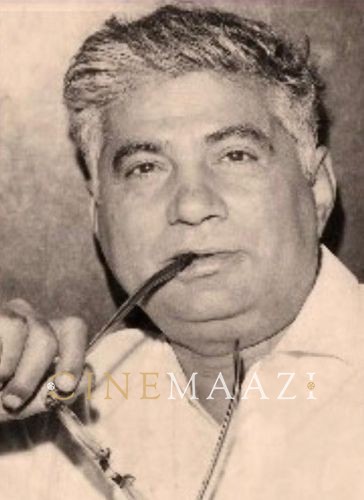 In the studio era of the Hindi film industry, when large studios dominated distribution and monopolised star contracts, it took exceptional determination and know-how to successfully run an independent production. A few succeeded in doing so, however, in the process gifting Indian cinema many remarkable films and prodigious talents. The producer-director K Amarnath was one among these outstanding few.

Born on December 1 1914 in Milanwali, Punjab, he developed a fascination for the cinema as a young boy. He soon became an aficionado of Hollywood films starring Douglas Fairbanks, Ronal Colman and Paul Muni among others. His incredible ability to narrate the films’ stories and hold his audience’s captive led his classmates to nickname him ‘Matinee Show’. A student of Rangmahal High School and later the Craik Technical School in Lahore, Amarnath’s fascination turned into passion. With encouragement from his teacher Parmatma Singh, he journeyed from Lahore to Calcutta in 1932 with hopes of becoming an actor.

Fortune did not favour him in Calcutta and in 1933 he migrated to Bombay looking for a fresh start. Initially, he worked as a junior artist, a time that had a significant influence on his ambitions. He slowly came to realize that he was more inclined to become a director. He started assisting renowned filmmakers like B.R. Patel and Dhirubhai Desai. He made his directorial debut when he was offered Matwali Jogan/ A Girl from Lahore (1936) by Mr. Lakhia of Metro Movietone. Earning praise from critics for his commendable work on his first film, his prospects shot up when he was approached by Ramniklal and Mohan Shah of Mohan Studios in 1937. The production house was one of the leading producers of B-films at the time. He made the film Danger Signal (1937) under this banner.

K. Amarnath soon became a well-known director of stunt films in the Madras film industry He directed four films in 1937, and of them Minnalkodi and Veer Ramani achieved considerable success. Both the films starred K.T. Rukmini and B. Srinivasa Rao. He collaborated with S. Nazir often for films like Chashmawali (1939), Captain Kishori (1940), Midnight Mail (1939) and Bandookwali (1944). His 1949 film Bazar (1949) starring Nigar Sultana and Shyam was a musical hit. In the 1940s, Amarnath worked with Noor Jehan for her last major ventures in India like the romantic tragedy Mirza Sahiban (1947).

In 1952, Amarnath started his own production house under the name of K. Amarnath Productions. He relished his freedom, and being an independent producer suited him. He worked with a select cast and crew, usually including Ajit, Jayant, Murad, Pran, Sajjan, Kumkum, Gope and Yakub as actors, the editor Vasant Borkar and music directors Ram Gopal Pandey, Shyam Sundar and Chitragupt. The first film Amarnath made under his own banner was Alif Laila (1953). The actor Ajit, who later earned greater fame as a villain, was his lead of choice in Bara Dari (1955), Bada Bhai (1957) and Kabli Khan (1963). In almost no time, K. Amarnath had earned the reputation of being both a bankable director and also one of the fastest directors in the industry.

K. Amarnath was known for giving newcomers opportunities to work in his films. He launched Salim Khan in Baraat (1960), Minoo Mumtaz in Bara Dari and Helen as a solo dancer in Alif Laila. Mohammed Rafi also considered the song Aj dil ho kaabu mein toh dildaar ki aisi taisi in his film Gaon Ki Gori (1945) to be his first Hindi film song. Amarnath’s Gaon Ki Gori, Mirza Sahiban, Beqasoor (1950) and Bara Dari were all major commercial successes. His last film was Woh Din Yaad Karo (1971). He tried to launch his film Manmohan Amarnath as a hero in a film titled Dadon Ka Dada, but the film was never released due to production problems.

K. Amarnath passed away on May 14 1983, leaving behind the legacy of a true maverick who established a foothold completely of his own in the industry.