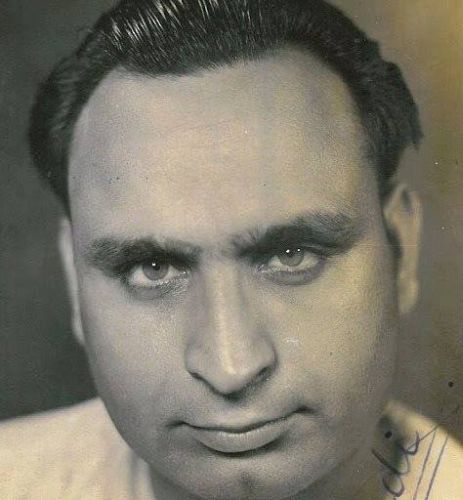 After obtaining an MSc degree from Kapurthala, the young man started working as a reporter for various publications like Daily Milaap, Daily Pratap and Nirala. He also started publishing a film magazine titled Star Weekly. When his repute as a shaayar had been established, Dalsukh Pancholi of the reputed Pancholi Arts approached Qamar to write the lyrics for Zamindar (1942). His first song, Duniya mein gareebon ko aaram nahin milta, was sung by Shamshad Begum and interestingly, the last 2 lines of this song were written by another lyricist, Behzad Lakhnawi. A couple of songs from this movie also became popular thus setting Qamar Jalalabadi on his destined path. In this early period, Qamar wrote the lyrics of several popular numbers for movies such as Sahara (1943), Kaise Kahoon (1945). His big break came in 1943 when D.D. Kashyap, V. Shantaram’s assistant from Prabhat Studios visited Lahore in a bid to meet Qamar, owing to the popularity of the songs from Zamindar.

It was on Kashyap’s behest that Qamar Jalalabadi moved to Pune and began his association with Prabhat Studios and Husnalal-Bhagatram. For Prabhat Studios, Jalalabadi composed the lyrics for films such as Ramshastri(1944), Chand (1944), Lakharani (1945) and Gokul (1946).  In 1946 when Baburao Pai broke away from Prabhat and started Famous Pictures in Bombay, along with his mentor, Kashyap, Qamar also moved to Bombay. He continued to collaborate with them and Husnalal-Bhagatram on movies such as Nargis (1946), Pyar Ki Jeet (1948) and Badi Behen (1949). For all of these films, Qamar’s songs became nationwide sensations.

By the end of the 1940s, Qamar Jalalabadi, then associated with Filmistan, already had a long list of accomplishments to his name. He had written for a number of films and had worked with singers and music directors of note. His popularity reached unprecedented heights in the 1950s and 1960s with his songs being used in hit films like the Ashok Kumar- Madhubala starrer Howrah Bridge (1958), Ansoo (1953), Paheli Tarikh (1954), Raagini (1958), Chhalia (1960), Pyase Panchhi (1961), Ye Dil Kisko Doon (1963) and Haseena Maan Jayegi (1968).

In the 1970s and the 1980s, with the rise of action movies, Qamar Jalalabadi continued to be active. In his prolific career, Jalalabadi wrote the lyrics for songs in over 155 films. His songs were graced by the voices of top singers of their times, spanning singers of the yesteryears like S.D. Batish, Noor Jehan and Suraiya to greats like Rafi, Talat Mahmood, Geeta Dutt, Mukesh, Lata Mangeshkar and Kishore Kumar. Qamar Jalalabadi’s collaborations with renowned music directors like Husnlal-Bhagatram, Ghulam Haider, G. Damle, Sudhir Phadke, Sajjad Hussain, O.P. Nayyar, Kalyanji- Anandji and Laxmikant-Pyarelal also proved to be fruitful, yielding songs that remain popular to this day.