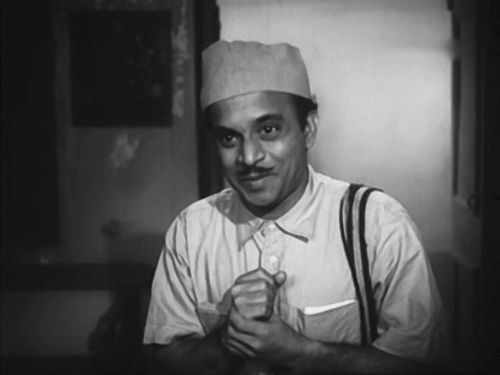 An indelible part of the public memory of Bengal, Rabi Ghosh essayed some of the most meorable roles in Bengali cinema history. Despite his popular image as a comedian, he was a committed student of the craft of acting - a seasoned thespian and master improviser. Be it the delightful Dhanonjoy in Galpo Holeo Satti (1966), the jestful Shekhar of Aranyer Din Ratri (1970), Mr Mitter in Jana Aranya (1976) or in his immortal avatar as Bagha Byne in the Goopy Bagha trilogy, Rabi Ghosh made a special place for himself in the hearts of Bengali filmgoers.

Born on 24 November, 1931, he received his education at South Suburban Main School and later at Ashutosh College. Reportedly he initially harboured wishes to be a bodybuilder, but chose to work at Banskhali Court instead. His initiaton into acting came through theatre. Associated with Utpal Dutt's Little Theatres Group, he became a valued member due to his incredible acting range. Utpal Dutt, whom he considered as his mentor, appreciated his Brechtian ability to embody various archetypal characters, which was a key element of Dutt's political theatre. Some of his notable plays were Chhayanat and Angar. He received the Ultorath award in 1960 for his performance in Angar. Making his film debut with Kichhukshan (1959), he followed it up with roles in Utpal Dutt's Megh (1961) and Satyajit Ray's Abhijan (1962). If Utpal Dutt was his mentor on stage, Satyajit Ray would have an immense influence on his screen acting. Influenced by the craft of Tulsi Chakraborty, Harry Langdon and Harold Lloyd, he would go on to establish himself as one of the pre-eminent comic actors of Bengali cinema. Starting to act regularly from Tapan Sinha's Hansuli Banker Upakatha (1962), he would also essay the role of Kyabla, Birinchi Baba's assistant in Ray's Mahapurush (1965). Tapan Sinha would go against the grain and cast him as the lead in his ensemble comedy Galpa Holeo Satti (1966), giving him one of his most memorable roles as the servant Dhananjoy. The film would later be remade by Hrishikesh Mukherjee with Rajesh Khanna playing Ghosh's character in Bawarchi (1972). Other than this he worked in Mrinal Sen's Abasheshe (1963), Momer Alo (1964), Surer Agun (1965), Uttar Purush (1966), Apanjan (1968), Baghini (1968) in which he played a darker character, Arogya Niketan (1969), Teen Bhuvaner Pare (1969), Marjina Abdallah (1973), Basanta Bilap (1973), Mouchak (1974), Chorus (1974), Jadu Bansha (1974), Charmurti (1978) and many more. He would act with his mentor Utpal Dutt in one of his career's most challenging roles in Thagini (1974). In between he essayed what came to be known as one of the most beloved characters in Bengai cinema history in Goopy Gyne Bagha Byne (1968). Satyajit Ray's musical fantasy was bouyed by his and Tapen Chatterjee's vivacious performances and of course, the memorable music, and became one of the most successful films of its time. He would reprise the role in the politically allegorical sequel Hirak Rajar Deshe (1980) and the Sandip Ray directed Goopy Bagha Phire Elo (1991). He was one of the few actors who was allowed by Satyajit ray to improvise his characters, except for the role in Jana Aranya. Enjoying a long association with Dinen Gupta, he would appear in almost all his films between 1972 and 1985. In between he also directed two films - Sadhu Judhishthirer Karcha (1974) and Nidhi Ram Sardar (1976). Though he felt that direction did not suit him and he returned to acting. He also appeared in three of Goutam Ghose's films - Antarjali Jatra (1989), Padma Nadir Majhi (1993) and Patang (1993). Towards the end of his career he would also transition to television, playing the role of Tenida in a popular adaptation of Narayan Gangopadhyay's popular stories.

A committed theatre actor throughout his life, he ran the theatre group Chalachal till 1970. The legendary actor passed away on 4 February 1997.