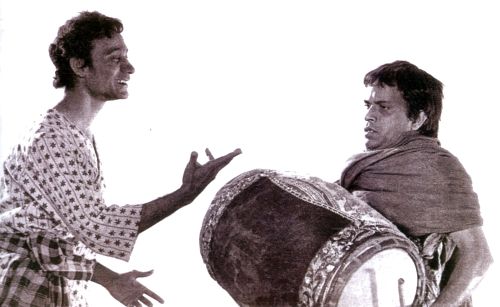 Immortalised as the minstrel Goopy from Satyajit Ray's musical fantasy Goopy Gyne Bagha Byne (1968), Tapen Chatterjee sang his way into the hearts of the viewers and never left. Not a professional actor, it was chance that landed him the role that would make him an indelible part of Bengali cinema history.

Born on 3 September, 1937, he trained as an engineer and was employed in Rajasthan. Returning to Kolkata he started to work in the advertising department of Satyajit Ray's Sandesh magazine. Their families knew each other, but Chatterjee had no inclination towards acting. He had made a small cameo in Mahanagar (1963), but when he got a call from Satyajit Ray asking him to be the lead in Goopy Gyne Bagha Byne he was shocked. But he aced the screen test and was soon acting alongside seasoned veterans like Rabi Ghosh. According to the people who worked with him, he was an extremely hard-working actor. He took the tapes of the songs beforehand in order to rehearse lip-synching. His labours paid off when the film was a roaring success.

Despite this success, he remained unambitious, appearing in only a handful of films like as Ghanteshwar in Dhanyee Meye (1971), Shriman Prithviraj (1972), Thagini (1974), Sadhu Judhisthirer Karcha (1974) and Ganadevata (1979). It was as if he was meant to play Goopy and Goopy only. He reprised the role twice more - in Hirak Rajar Deshe (1980) and Goopy Bagha Phire Elo (1991). He also appeared briefly in Satyajit Ray's documentary on his father Sukumar Ray.

He suffered from lung ailments from a long time, including the time when he was shooting. The ailment ultimately claimed his life on 24 May 2010. He lives on as the songster who taught a generation of children the values of justice and compassion, of speaking up for what is right.