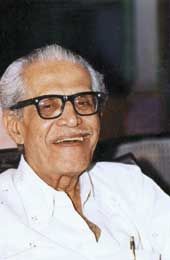 Legendary pianist, musician, music director of film and non-film music, and arranger, V Balsara distinguished himself in both Hindi and Bengali films, besides composing music for stage and for television. Rich in knowledge of both Indian and Western music, Balsara successfully presented Indian classical music on Western instruments like the piano. His constant experimentation is evident in a vast output of records and albums. Considered a wizard with instrumental orchestration, he composed music for approximately 32 Bengali films as well as 12 Hindi films, with over 200 albums to his credit. A master keyboardist, he could also play the harmonium, organ, piano, piano accordion, melodica, and univox, popularising these instruments in the recording industry. Winner of the Allauddin Khan Award of West Bengal in 1990, he was also honoured with the Sangeet Natak Akademi Award for his contribution to creative music.

Born Vistas Ardeshir Balsara, on 22 June, 1922 in Bombay to a Gujarati speaking Parsi Zoroastrian family, his flair for music was evident from his childhood. His mother Nazamaye was said to be his first teacher, training him in the harmonium. He was all of 6, when he gave his first public performance at Bombay’s Cowasjee Jehangir Hall playing the pedal harmonium. Greatly influenced by western music, he learnt to play the piano from Hildafield, a German musician. Equally at ease with string and wind instruments, he was known for his versatility with several musical instruments such as the piano, univox and melodica. He also mastered the technique of using the piano for playing Indian classical music from Muneswar Dayal of Gaya.

His career in film music started with the Hindi film Baadal (1942). He assisted music director Ustad Mustaq Hussain in this film, and went on to assist music directors Master Ghulam Haider, and Khemchand Prakash. As an independent music director, his first solo assignment was for the film Circus Girl (1943). Balsara and Vasant Kumar Naidu were the music directors for this film. He went on to compose music for Hindi films such as O Panchhi (1944), Rang Mahal (1948), Char Dost (1956), Vidyapati (1964) and Pyar (1969) in Hindi. He also had an interesting repertoire of Bengali films which he scored music for, such as Chalachal (1956), Panchatapa (1957), Subho Bibaha (1959), Kanchan Kanya (1963), Pathey Holo Dekha (1968), Joy Baba Baidyanath (1979), among others.

Balsara also had many music albums to his credit particularly as an instrumentalist and symphony orchestra music composer.

In 1947, he joined HMV as Orchestra Director. He also became part of RK Films working with the legendary Shankar-Jaikishan, and also with Naushad. When it became challenging to sustain his career over a long period as a music director in the Hindi film industry, Balsara changed track and became a famous instrumentalist, orchestra conductor, music teacher, and music composer of non-film songs, as well as Bengali films.

Invited by Bengali music composer Gyan Prakash Ghosh to visit Calcutta for a musical show, he ended up settling there in 1954. While he mostly played the harmonium in Bombay, in Calcutta, he became more famous as a pianist and piano accordion player. Here, he also learnt Indian classical music from Muneshwar Dayal of Gaya and took a keen interest in Rabindra Sangeet. Recording many important Rabindranath recordings in Calcutta, he also added the notations to some Tagore songs which lacked precise notations. A pioneer in playing Indian ragas on the piano of which his albums were also available, Balsara also often conducted jugalbaandis (duet concerts) with other instrumentalists such as renowned sarod player Pandit Buddhadev Das Gupta. He is also said to have written a technical book explaining to Western musicians how to apply chords in Indian ragas. As in Bombay, Balsara remained a part of the musicians’ circuit in Calcutta as well. Active and jovial by nature, he was known to make music recordings fun, and served as a father figure to many musicians in both cities.

This period saw him work on at least 30 Bengali films in various capacities including orchestra conductor, background music composer, assistant music director and music director. Composing several non-film Hindi and Bengali songs in the 60s and 70s, he has to his credit many music albums particularly as instrumentalist and symphony orchestra music composer. Portions of his orchestra albums were also used by All India Radio and Radio Ceylon as fillers between programmes. Sharing a personal and professional relationship with Hemant Kumar, whom he had met for the first time in 1943 at Filmistan Studios in Bombay, Balsara often toured with Kumar across the country and the world.