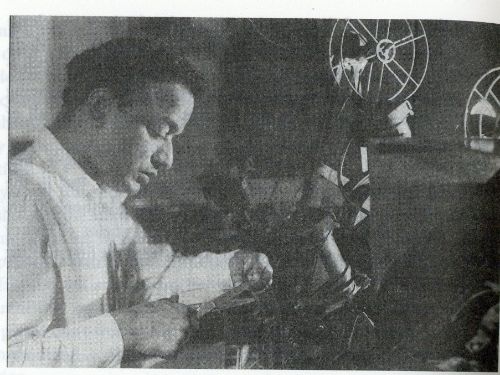 A skilled actor, gifted editor, discerning director, and progressive producer, V Shantaram remains one of the most accomplished filmmakers in the history of Indian cinema. Born just five years after the arrival of the new medium of moving pictures, he witnessed the evolution of cinema technology from the silent era up until the digital age in the 1980s. Becoming a legend in his own lifetime, he produced 92 films, directed 55 films and acted in 25 films. A multi-talented filmmaker, who evolved a new style and grammar of filmmaking, he was one of the first filmmakers to comprehend the value of the film medium to engender social change. He used his films to advocate humanism as well as expose injustice and bigotry rampant in society. He is best remembered for some of the finest films of social relevance as well as entertainment such as Maya Machhindra (1932), Ayodhyecha Raja (1932), Sairandhri(1933), Amrit Manthan (1934), Duniya Na Mane (1937), Dr Kotnis Ki Amar Kahani (1946), Amar Bhoopali (1951), Jhanak Jhanak Payal Baaje (1955), Do Aankhen Barah Haath (1957), Navrang (1959), Iye Marathiche Nagari(1965), Pinjra (1972), Zunj(1975),and Chaani (1977), many of which garnered national and international honours. His crowning glory would have to be Do Aankhen Barah Haath (1957), which focused on the need to rehabilitate criminals. It won the Silver Bear for Extraordinary Prize of the Jury, at the Berlin Film Festival 1958, a Special Prize from the International Catholic Cinematographic Bureau, and the Samuel Goldwyn International Film Award for the Best Foreign Film.

He was born Shantaram Rajaram Vankudre on November 18, 1901 to parents Kamala and Rajaram, a shop-owner who hired out petromax lamps to drama troupes performing musical plays, in order to supplement his small income. The second of five sons, he was more interested in extra-curricular activities than studies and popular for his gift of mimicry. Spotting him, stage great Govindrao Tembe recruited him into the Gandharva Natak Mandali, which he had established with fellow actors Ganpatrao Bodas and Bal Gandharva. However, it came as a shock to Shantaram to discover on his very first day at work, that he could not sing and lacked a sense of music—an important prerequisite in those days of musical plays! He spent a year with the company before returning to school. However, not able to make a success of his studies and with his family going through bleak times, he found work at the Railway Workshop, thanks to the efforts of a family friend. His hard work impressed his superiors, however, his stint ended when he met with a serious accident that grievously injured two fingers of his right hand—he bore the scars till the very end.

Still fascinated by the creative arts, he approached his first cousin on his mother’s side, Baburao Pendharkar who was a manager at the famous Maharashtra Film Company. He was hired in 1919 by the famous filmmaker and painter, Baburao Krishnarao Mestry better known as Baburao Painter, who was to become his mentor. It was a good place to be for Shantaram, as the company was a perfect training ground for youngsters keen to make a career in the new medium, and he made swift strides.

Shantaram was just 28 when he, along with Keshavrao Dhaiber, Vishnupant Damle and S Fatehlal, went on to found their own company, joined by their financing partner, Sitaram Kulkarni. The legendary Prabhat Film Company was born on June 1, 1929 at Mangalwar Peth, Kolhapur. Shantaram had taken his first steps in this direction at the Maharashtra Film Company, when he was handed the directorial reins of Netaji Palkar (1927), by Baburao Painter. Co-directed by Keshavrao Dhaiber, he would direct five more films at Prabhat, the first being the very successful Gopalkrishna (1929). Seeing the bullock cart race in the film becoming a talking point, Shantaram thereafter ensured that every film made by Prabhat would include a highlight which gave it an advantage over the others. His next, Udaykal (1931) based on the story of Shivaji, saw Shantaram directing the film as well as playing the title role. This was one of the earliest films to mobilise the highly politicised figure of the Maratha emperor Shivaji. Incidentally, it had to be renamed as its original title, Swarajyache Toran which translated to Flag of Self-rule, was found by the British censors to propagate the cause of the Indian Freedom Movement.

To Prabhat goes the credit for making the first bilingual in the history of Indian cinema in 1932 - Ayodhyecha Raja in Marathi and Ayodhya Ka Raja in Hindi. This big-budget mythological is widely regarded as the first Marathi talkie, although Sant Tukaram (1936) received the censors’ ratification eleven days earlier. Shantaram baulked orthodox traditions by casting Durga Khote who was still a novice actress. This film set the trend for much of the filmmaking on the western coast in the 1930s. More proof of Shantaram’s prowess lies in the fact that three of the eight films made in the first year of Marathi cinema were made by Prabhat Film Company. Ayodhyecha Raja, Agni Kankan (1932) and Maya Machhindra were all directed by V. Shantaram. Maya Machhindra was noted for its use of special effects to add to the spectacle.

During the making of Sairandhri, Prabhat was shifted from Kolhapur to Pune, a more convenient location for future expansion as well as availability of facilities. The first Prabhat film to be produced in the tin-built sound-proof studio was Amrit Manthan (1934), which exposed religious obscurantism and bigotry (based on a similar story from his earlier Agnikankan). Shantaram experimented with light and shade for this film, also becoming the first Indian filmmaker to use a telephoto lens to shoot the first close-up for the film. Coming as it did in the 1930s, the sight of the character’s evil eye filling the entire screen drew shock and awe from the audiences. It also became the first Hindi film to celebrate a Silver Jubilee, running for 25 weeks at a single theatre. Dharmatma (1935) featured the theatre legend Bal Gandharva and drew parallels between its main character Sant Eknath and Mahatma Gandhi. The film was also originally titled Mahatma but was changed due to opposition from the censors. Shantaram’s Amar Jyoti (1936), a costume drama, raised its voice in support of women’s emancipation. With both these films, Shantaram demonstrated a hitherto unseen style of filmmaking, with fresh themes and crisp visuals. This was, in a way, a training period for his best which was to come between 1937 and 1942, which made Prabhat a national name and established Shantaram’s reputation as an all-time great. While 1937’s Kunku (Marathi) or Duniya Na Mane (Hindi) centred around the theme of a May-December marriage and women’s emancipation, his next, Manoos (Marathi) or Aadmi (Hindi) focused on an honest policeman's love for a prostitute and his attempts to rehabilitate her, and the third, 1941’s Shejari (Marathi) or Padosi (Hindi), explored communal harmony via the altering bond between a Hindu and Muslim neighbour. Kunku especially came to be regarded as a landmark film in the history of Marathi cinema, both for its visual innovations as well as its progressive subject.

Moving away from Prabhat, Shantaram went solo to set up his own studio, Rajkamal Kalamandir in 1942 in Bombay, as a tribute to his parents Rajaram and Kamalabai. His first film for Rajkamal, Shakuntala (1943) remains one of the most well-known adaptations of the Kalidasa classic. He re-edited Dr Kotnis Ki Amar Kahani, and created an English version, which was screened at the India League in London before it was bought for distribution in England. This film as well as Shakuntala were also distributed by Mayer & Burstyn in America, and were well-received.

Shantaram reshaped and completed the Baburao Painter-directed Lok Shahir Ram Joshi (Marathi) or Matwala Shair Ram Joshi (Hindi) (1947) which centred on the folk art of tamasha and lavni. The film was a massive success in the post-War era. The film was also later referenced in Shyam Benegal’s Bhumika (1976). His Amar Bhoopali (Marathi) or Le Chant Immortel(1951) focused on the life and times of the poet Honaji Bala, bagged the Grand Prix for the Best Sound Recording awarded by the Centre National de la Cinematographic at the Cannes Film Festival, 1952.

Learning from the lukewarm response received by his social-themed films Surang (1953) and Subah Ka Tara(1954), he focused on delivering pure entertainment in the dance extravaganza Jhanak Jhanak Payal Baaje (1955). However, with his next, Do Aankhen Barah Haath (1957), he returned to blending entertainment with social commitment, to stunning effect. The film remains his piece de resistance. Dabbling in entertainers, he set trends, making the colour film Navrang (1959) which became a huge success, even as he now concentrated on innovative songs and dances. His Stree (1961), Sehra (1963), Geet Gaya Pathoron Ne (1964) and Boond Jo Ban Gayi Moti (1967) appealed to audiences. While the bilingual Ladki Sahyadri Ki /Iye Marathichiye Nagari and Jal Bin Machchli Nritya Bin Bijli (1971) did not do well commercially, he hit bull’s eye again with Pinjra (1972), the first Marathi film in colour and a remake of Der Blaue Engel (1930), which blended social flavour with song-and-dance. He later attempted to enter into dialogue with the Indian New Wave’s radical aesthetic with Chaani (1977), an adaptation of a work by C T Khanolkar.

Shantaram was a master storyteller, making films with a contemporary comment and establishing his reputation as a director of international repute. A sound craftsman and technician, thanks to his mentor Baburao Painter, he incorporated various technicians into the making of his films. He also had a keen interest in music and is said to have ghost-written music for many of his music directors. His radical critique of regressive traditions through mythologicals and socials and multiple technical innovations has earned him a place in the pantheon of the greatest filmmakers of history.

Honoured with a D.Litt by the University of Nagpur (1980) as well as the Dadasaheb Phalke Award for Lifetime Achievement (1986), the highest award in Indian cinema, V Shantaram, an institution in himself, passed away on 30 October, 1990 at the age of 89. He was posthumously awarded the Padma Vibhushan in 1992.