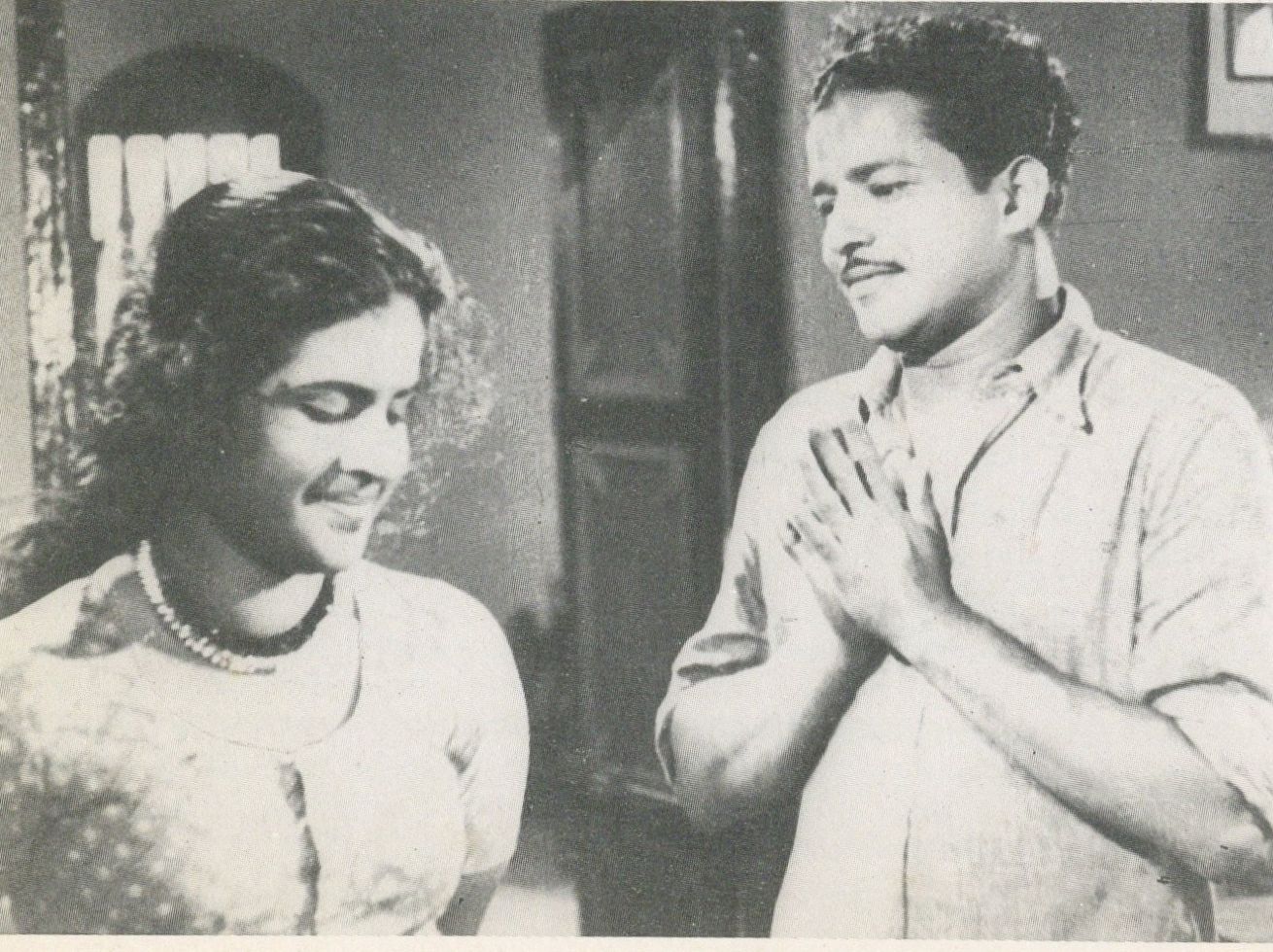 A still from the pioneering Malayalam film Neela Kuyil. Ramu Kariat and P Bhaskaran jointly directed this film. Bhaskaran also acted one of the three main roles in the film.

Fifty years is a good period for any medium to find its place in a cultural context. Malayalam Cinema, undoubtedly, has been deeply rooted in the Kerala milieu and has become part of its pride, during the last half-century. Like in literature, the Malayalis have come to take the creative avenues opened up by the cinema, in all its seriousness. Whether it is down-to-earth commercial films or serious creative work, the Malayali is forced to gauge it through the aesthetic sense, which his cultural heritage has given him.

In fact, this explains the various trends in Malayalam films, which is characterising the Malayalam Cinema in its 50th year. Today, there are two clear-cut trends in the film scene of Kerala. One, which swears by the profit margin at any cost and the other, which struggles to get national and international attention through its creative and aesthetic excellence. Fortunately for Malayalam Cinema and also for the Indian Cinema, both the trends are almost equally strong. Outside Kerala too, Malayalam films are known for its "sexiness" as well as creative merits, reflecting both the two strong trends of film-making.

It is interesting to know how this clear-cut division has come about. The "sex wave" in the North Indian Cinemas was pioneered by the Malayalam films. The initial trend was that of a commercially unsuccessfuly Malayalam film getting sold to someone for a paltry sum for distribution outside Kerala territory. The distributor/exhibitor then interpolates the films with what the 'masses' are starved of and sells it in the theatres of a not-so-familiar milieu. This, of course, proved to be very successful and leading to a rash of all such Malayalam films, which even the Keralites did not have the "luck" to appreciate. All these happened in the late' seventies side by side, with the onslaught or the formula-ridden trash films.'

On the other hand, the strong Film Society Movement, combined with the equally strong literary traditions and socio-political awareness threw up large number of youngsters into the field of film-making. When Adoor Gopalakrishnan and G. Aravindan started their career in films, they were dealing with an audience whose basic aesthetic experience was that centuries' old sanskritised literature.

But today the same film-makers are being appreciated by an audience, which gets to see the best of world films through their film societies. So much so, both Adoor and Aravindan, the two names, which are synonymous with the best films of Kerala, do not have any problems with the box-office returns of their films. Aravindan's Chidambaram (1985) had fetched the distributor as much as Rs. 20 lakhs as profit within six months of its release in Kerala.

Even if one leaves aside the totally-committed creative film-makers like Adoor and Aravindan, the large number of middle-runners like Bharatan, Satyan Anthicad, Priyadarsan and Balachandra Menon, who ate basically a mix of the Film Institute graduates and film society products vie with each other to get into the category called the "Indian Panorama" section of the International Film Festival of India. In Kerala, if anybody in the film-making scene has to be taken seriously, he or she has to be a "Panorama" film-maker or a winner of the State or National awards. Entry into the Panorama, ensures the return of the investment through national television's "idiot-box", makes the film and film-maker a household name and raises the film-maker to the category of creative artist. Some even go to the extent of calling these films as made out of the "Panorama" formula.

If one looks at the creative film-making scene of Kerala, this seems to be the dominant trend today.

The strong literary base of the films has more or less declined though film-makers continue to make films based on short stories rather than on novels of eminent writers. This year itself two films, Rugmmini (1989) by K P Kumaran, based on Kamala Das's short story and Kadaltheerathu (1988) by Rajeev Nath based on O.V. Vijayan's story, have been completed and noted for their aesthetic merits. The predominant elements seems to be those of filmy situations and historic aspects. There were two films which got noted nationally this year in this category- Orethooval Pakshikal (Birds of the Same Feather) by Raveendran and 1921 by I.V. Sasi. While Raveendran's film is a marxist interpretation of the early trade union movement in the plantations of Malabar, Sasi has based his film on the great "Mappila (Moplah) Rebellion", the first great independence struggle of Kerala.

No doubt, whatever be the aesthetic experience, the Keralites awoke to the obituaries written by the Kerala Film Chamber of Commerce last year, finding themselves amidst frequent strikes in the theatres and processions of film 'stars and producers, who feared that the economics of Malayalam film industry lay shattered due to various policies of the State Government and the differences in the tastes of the audiences. It is true that production of films have been reduced to half of that of the previous year. The rush of producers, mostly the Gulf returnees seems to be over with the crisis in the Middle East employment market. The reduction in production has affected the economy of the theatre-owners. The Film Chamber has a right to write its own obituaries, but certainly not that of the Malayalam film industry.

Any serious student of film of Kerala and throughout the country knows that with its most modern studio facilities, the Kerala State Film Development Corporation offers any film-maker easy avenues to make a film in Kerala with the other facilities offered by the KSFD Corporation. Many have made use of KSFDC and shot films in 16 mm and then blown them upto 35 mm, with unbelievable small budgets. So, the crisis remains that of the industry and not of the medium of Cinema as such.

With the advent of telefilms, the average good film-makers are a happy lot today. They can survive the rigorous economics of the good films through the telefilms without compromises and formulae. Aravindan is shooting his next telefilm. Adoor Gopalakrishnan and K G George are preparing for their telefilms. Many others are busy ensuring their daily bread through innumerable avenues opened up by television—Doordarshan.

Any mention of the 50 years of Malayalam Films cannot be complete without the mention of the contribution of late John Abraham. His Odessa Films and Film Society (named by way of homage to Eisenstein) remain as a fitting tribute to the memory of a complete film-maker. John lived with films and for films and though he made only few films, revealed to the world an entirely original creative world of film-making and aesthetic experience. One may analyse and ridicule because of his personal drawbacks, but nobody can Ignore his ubiquitous presence during the last 15 years of the last half century of Malayalam Cinema.

The Malayalam Cinema, time and again, has been commented for its thematic excellence. Various social issues are being dealt with even in the worst of films. This tradition has been initiated by the early involvement of writers and leftist theatre personalities like Thoppil Bhasi of the Kerala People Arts Club. They brought in subjects like Harijan emancipation, problems of illiteracy, politics, question of land distribution and trade union movement into the Malayalam films, which nobody could later reject Even now, the worst of productions base themselves on some theme of social relevance and move onto exploiting it for other purposes. Even a routine film-maker ventures into political subjects, just to be controversial. Films are made out of recent political events to exploit the curiosity of the audiences, who have been involved or heard and seen the actual events.

But in the centre of this confused situation are creative artists like Adoor and Aravindan, whose films have become happenings in the Indian film scene. Though no name has come out as prominently these two there are a few like KR. Mohan (Purushartham, 1987), V K Pavitharan (Uppu), and Raveendran (Orethooval  Pakshikal) who have the makings of equally eminent creative potentialities and achievements.

Of course, the Film Society Movement buffs and the graduates of the Pune Film Institute like Venu and Sunny Jospeh, Rajeev Vijaya Raghavan are yet to venture into their own productions, though Aravindan's cameraman, Shaji is also doing it. The future seems to be bright at least for the "alternative" Malayalam Cinema, though the Film Chamber people are busy writing obituaries and moaning.

This article was originally published in Indian Cinema 1988 issue. The images used are taken from the original article.
642 views