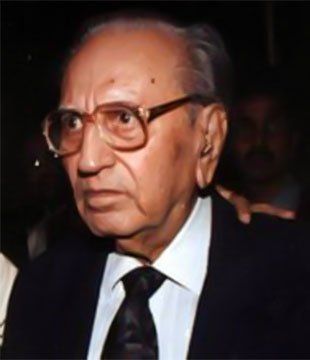 Born into a wealthy trading family of Hyderabad, Sindh on 14 September, 1914, Goapal Parmanand Sipahimalani or G P Siippy as he came to be better known, grew up in Karachi and was based there till 1947. After Partition, he, along with his family comprising his parents, wife and two children, moved to Bombay where they already had some businesses and properties. Along with the partial compensation that the Sippy family received for the loss of their properties in Sindh, Pakistan, G P Sippy entered the construction industry, and became a builder and property developer.

Apparently, during the construction of one of his projects which happened to be actress Nargis’s apartment, Sippy became enamoured with films. He went on to use some of the profits he had made on a particular property to produce his first film, the Dev Anand-starrer Sazaa (1951). From then on, there was no looking back. He made Shahenshah in 1953, which was India's first full-length Gevacolor film and India's third full-length colour film. Under his banner – Sippy Films, he went on to make films for the next 30 years. He produced several blockbusters such as the Guru Dutt and Waheeda Rehman starrer 12 O’Clock (1958), and the very successful Mere Sanam (1965) which starred Asha Parekh, Biswajeet, Pran, Rajendra Nath and Mumtaz, and had a hit musical score by Majrooh Sultanpuri, O.P. Nayyar and the Asha Bhonsle-Mohammed Rafi combination. More success followed with Brahmachari (1968), Andaz (1971), Seeta Aur Geeta (1972), Sholay (1975), Shaan (1980), Saagar (1985), Raju Ban Gaya Gentleman (1992), Aatish: Feel The Fire (1994), Zamaana Deewana (1995), and Hameshaa (1997). He also produced Buniyaad (1986), the successful TV series based on the Partition of India and its aftermath.

Among his biggest blockbuster productions, Brahmachari was directed by Bhappi Sonie and starred Shammi Kapoor and Rajshree. The film revolved around a brahmachari, a man who had taken the vow of celibacy, falling in love with a young woman who already loves a promiscuous man. A musical hit, the film went on to be remade in Tamil as Enga Mama (1970) and in Telugu as Devudu Mamayya (1981). Sippy’s Andaz included the hit number rendered by Kishore Kumar - Zindagi ek safar hai suhana. The film marked the directorial debut of G P Sippy’s son Ramesh, and starred Shammi Kapoor and Hema Malini. It explored the topic of remarriage between a widow and a widower. Rajesh Khanna’s cameo in the film was also much-appreciated.

Sippy’s production Seeta Aur Geeta gave the trend of double roles a boost. Directed by Ramesh Sippy, it was the one of the few Hindi films to feature the female lead in a double role.

The crowning glory of his career was Sholay. Producer of what is probably Hindi cinema’s best-known film and biggest hit, Sholay ran continuously for five years at the Minerva theatre in Bombay. Directed by his son Ramesh Sippy, this well-written and well-made film remains beloved for its unforgettable characters such as Jai, Veeru, Gabbar Singh, Thakur Baldev Singh, Basanti, Chachi and Imamsaheb.

Sippy’s Saagar was selected as India’s official entry for the Oscars in 1985. A contemporary love triangle directed by Ramesh Sippy and starring Rishi Kapoor, Dimple Kapadia and Kamal Haasan, the film reflected the the changing norms of the times.

G P Sippy also directed some films in the 1950s and 1960s such as Marine Drive (1955) starring Ajit and Bina Rai in lead roles in a plot that deals with smuggling and underworld crime. His directorial Shrimati 420 (1956) was an emotional romantic musical thriller featuring Johnny Walker, Meena Shorey, and Om Prakash. Mr India which he directed in 1961 revolved around a naive unemployed youth who is mistaken for a look-alike gangster. It starred I. S. Johar as Gullu, and Geeta Bali as Miss Bembi.

A prominent and active member of the film industry, Sippy was President of the Film Federation of India in 1972-1973, 1985-1986, and 1988-1992. He also held the position of the Chairman of the Film and Television Producers Guild of India for several years. He was married to Mohini. The couple had four sons and a daughter. Their second son, Ramesh Sippy became an acclaimed filmmaker, best known for the blockbuster hit Sholay (1975).