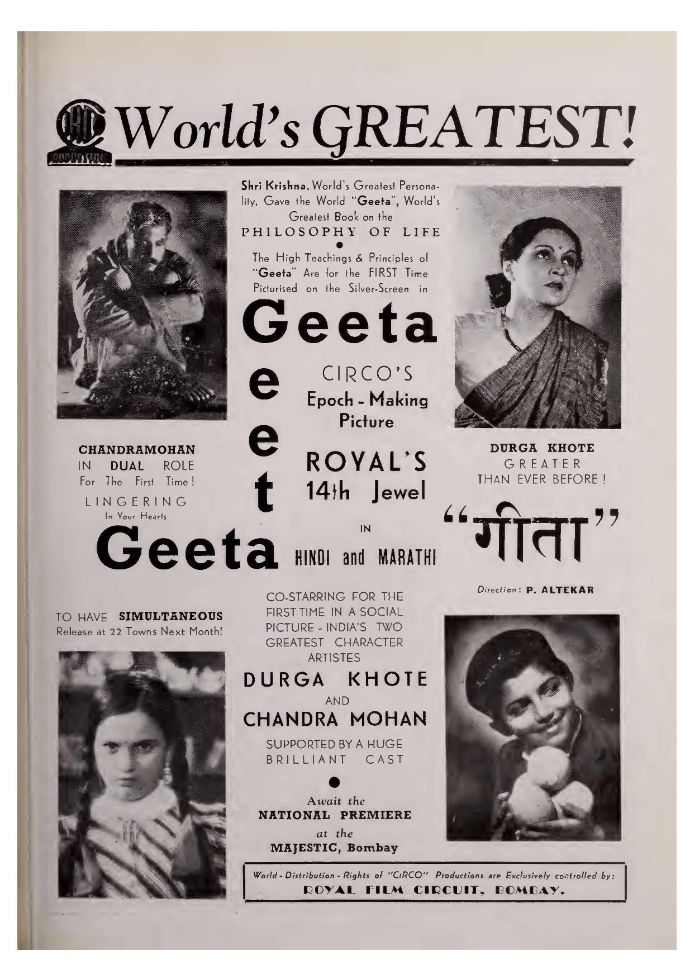 This advertisement of Geeta has been taken from Film India. It was not part of the original article

The unfortunate thing about this Circo Picture is its name Geeta (1940). It seems that the name was conceived first and the story was stretched subsequently to come up to the name. Geeta is a misleading name to this social melodrama which has a convincing pretence of a theme underlying its picturization.

In their advertisements, the producers have made a lot of the name of the picture and in doing so have misguided people into believing it to be a religious theme, thereby keeping a large section of people away from the theatre.

In addition, the vagaries indulged in giving cheap publicity to the picture has alienated the public sympathy for the picture. Moreover, the advertisements themselves have made poor and puerile copies which failed to appeal. And it is a pity to observe all this when the subject could have been correctly advertised and made a success financially.

And yet purely from the production point of view, this picture of Circo is their best production since they began producing pictures in Bombay. And that is saying a lot after the disgraceful failures of Sohag (1940) and Anuradha (1940).

The story has a deeply philosophical idea underlying it. Shankar and Durga are poor and have Mohan, their child to share. Durga believes in virtuous living as enjoined by the tenets of the Bhagwat Geeta. She leads a devotional life. But Shanker, a practical man, vindictive because of the ungrateful apathy of the world, finds only frustration in his wife’s devotional pursuits. Burning his boats behind he becomes an outcast and leaves the home with his little son Mohan.

Shanker is now on the highways of life, seeking a living and shelter by his wits. He becomes an expert crook and makes his son also an efficient understudy. The arrogance of success in his sharp practices, he considers as his strength to be pitted against the world.

Durga on the other hand pursues her course of the virtuous life in the midst of usual difficulties and gets another son Kumar, whom she trains up according to her ideals.

In the city, Shanker and Mohan are feared as dangerous characters and they seem to be doing well for a time, in the midst of loot and killings. Then one day, Shanker is caught for murder and hanged. Mohan decides to wreak a dire vengeance on the people who plotted against his father. He follows faithfully in his father’s footsteps and heaps killings on killings. And then Mohan also faces the law for murder. But as fate would have it, his own younger brother, now a barrister, prosecutes the charge against him.

Under the most dramatic circumstances, Mohan and his mother meet again. And the tears of faith, which the virtuous woman sheds, melts the scoundrel’s heart which immediately becomes thirsty for salvation.

To the superficial observer, Geeta looks like a crime drama, because a gangster runs riot through it. But, perhaps accidentally, the punishment of crime is so often stressed and the need to live a better life is so often preached that the crime part looks incidental to the person who would stop and think a bit.

The production values are poor all round. The direction is weak. The photography is mediocre. The sound recording is bad. The music is hopeless, both in the choice of tunes and the singing, barring one song of Vatsala Kumptekar. Utterly stupid editing has made the picture boring at places. With a little clever and imaginative re-editing the picture will improve a lot.

And now Chandramohan! Irresistible, inimitable and incomparable as usual, thunders through the picture like a giant, radiating a thousand reflections of his personality in a three-in-one portrayal and making Geeta a picture to be seen.

The man acts in his words. His very voice thrills with its well-measured modulations tuned to the subtleties of the different situations. His relentless cruel eye searching for a prey, when it descends on his little son, melts dotingly with the love of a universe in it. Marvellous! In that one tilt from the victim to his son, is a complete romance of histrionics which only Chandramohan can interpret. Bravo! Chandramohan.

Durga Khote takes a lot of the screen with scenes that sharply contrast with crime. Perhaps the extreme contrast itself makes her scenes a little boring. The only temptation to go through them is Durga’s superb and sincere work. In her scenes with Chandramohan, she keeps up well though matched with a dynamic artiste. It must, however, be remembered that in case of Chandramohan and Durga Khote, the director is hardly necessary for their performances. They don’t need a director.

Anant Marathe, that darling little fellow, must be mentioned with these big names. He is the only one who keeps good company with a confidence that suggests experience and courage.

The rest of the performances were just trash. None of the others knew what they were about.

Well, Geeta should be seen, if only to see Chandramohan or Chandramohan and Durga Khote for the first time together.

This review was originally published in Film India in the November 1940 issue.