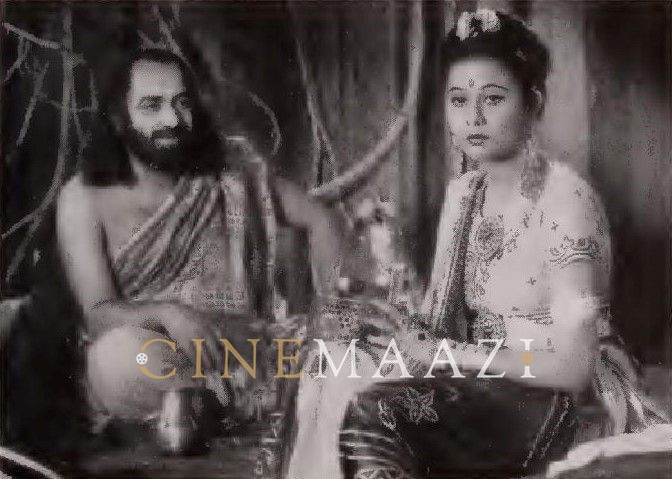 Here is India’s first picture produced in the English language and in comparison with the Hindi and the Bengali versions, the “Court Dancer’ (Raj Nartaki) in English has become a more intense and melodramatic picture. Naturally, therefore, “The Court Dancer” provides better entertainment to all.

People have been waiting for years to see the first Indian picture in English. And now here is their chance to see one and a beautiful one at that.

Though “The Court Dancer” cannot be compared with the super productions from Hollywood, it is still on level with the some very good pictures from Hollywood and it is a far sight better than several picture coming from Great Britain.

As the drama unfolds itself on the screen, “The Court Dancer” supplies a rare thrill with the expectation of Indian artistes talking in English held in suspense for some time. And when the first few sentences are heard, one thinks it all too difficult to believe. And yet it is true too true that our own artistes have delivered the goods almost as effectively as the glamour boys of Hollywood.

The original plot of the picture has become more effective than the Indian language versions, as all extraneous sequences have been removed from the English version by cutting it down to approximately 7600 feet. The silly comedy element which had provided such a drag in Hindi and Bengali has been entirely cut out to the utter relief of the audience. The film story has therefore become concise, deliberate and more effective.

A STORY WITH MODERN PARALLELS

This is a story of a great love between a prince and a court dancer. It is an ancient story from one of the most colourful kingdoms of India - Manipur. But in its essentials, even this ancient story finds modern parallels in our present-day life. Because the drama is born out of the maladjustments of our social values since times immemorial.

Indrani, the lovely court dancer attached to the kingdom of Manipur was in love with Prince Chandrakirti, the heir-apparent to the throne. The Prince reciprocated the sentiment of the dancer with equal sincerity and warmth.

The original plot of the picture has become more effective than the Indian language versions, as all extraneous sequences have been removed from the English version by cutting it down to approximately 7600 feet. The silly comedy element which had provided such a drag in Hindi and Bengali has been entirely cut out to the utter relief of the audience. The film story has therefore become concise, deliberate and more effective.
But the social gulf between them prevented the Prince from taking his lady-love to the altar and making her the future Queen of Manipur. Could the court dancer be a fitting consort to a Royal Prince? Could a Royal Prince marry an ordinary dancer even if he loved her more than his life? This story says “No”, but it is a story of the ancient times.

But in the suicide of the court dancer is a question born: Is human life greater than our manmade social laws? If the supreme sacrifice of the court dancer wins for her even a little sympathy of our present day prejudice-ridden world, this effort will not have been in vain.

The King of Manipur, father of the Prince, was only too willing to forge this alliance with the neighbouring kingdom to end an old feud with a powerful enemy.

But in the suicide of the court dancer is a question born: Is human life greater than our manmade social laws? If the supreme sacrifice of the court dancer wins for her even a little sympathy of our present day prejudice-ridden world, this effort will not have been in vain.
The welcome news spreads far and wide. Goswami Kashishwar, the religious head of the community, decides to travel to Manipur with the Sacred Dust of the feet of Lord Chaitanya and to bless the people of Manipur by the distribution of the Sacred Dust.

THE TYRANNY OF RELIGION

In Indian life, religion has always played a vital part and even after ages of deterioration, religion is still the supreme urge for the 400 million Indians. In the ancient times, therefore, the Sacred Dust and its distribution would be considered the most sacrosanct event in the history of a kingdom.

The High Priest Goswami Kashishwar arrives  in the court dancer’s garden and watches her Radha Krishna dance in quiet admiration. The court dancer’s chaste and excellent interpretation of this symbolic dance of divine love wins his admiration and in a moment of ecstasy he offers her the Sacred Dust. But the King who arrives just then intercepts him by informing him that Indrani was a mere court dancer and as such had not enough caste to receive the holy blessing. The High Priest checks himself and refuses to bless the court dancer.

The first evidence of her social status is thus brought home to the dancer and she becomes sad and depressed.

At the Court, the Envoy Extraordinary of Tripura is pressing King Jaisingh of Manipur to announce the engagement of the Prince to the Princess, but the Prince becomes adamant in love and the thought of taking another woman as a consort tortures him. His love for the dancer was divine.

Next day the King summons the court dancer to dance at the Court assembled to announce the engagement of the Royal Prince. Indrani dances with love in her heart and eyes on the Prince, but when she hears of the engagement she is broken hearted.

With a mountain of despair on her head and a storm of emotions within, the court dancer repairs herself to a ruined temple on a hill top to pray to the Lord. The Lord answers her prayers and lo! She beholds the prince standing besides her solemnly swearing the troth: “I’ll marry you and make you my queen”.

The drama now rushes to an emotional climax. A rejected lover of the court dancer excites the subjects of the King and denounces her as a witch. On the other hand, the King of Manipur is furious at the behavior of his son, and for the first time in his life wants to exercise his royal authority regardless of the question of his son’s happiness.

But the Prince is irreconcilable.

He rushes to the chamber of the court dancer and there plans to elope with her the next morning. For a moment their all absorbing love for each other has triumphed and both the lover and the beloved are carried away with the beautiful prospects of the future union.

The King is on the horns of a dilemma, and he does not know how to solve the problem. The Envoy Extraordinary of Tripura is pressing ever harder than before. Just then Goswami Kashishwar volunteers to speak to the court dancer.

They meet in the ruined temple on the hill top and there the High Priest in his soothing and yet stern voice tells the court dancer of the divine duties of kingship. And in the name of her very love for the Prince urges her to sacrifice it to enable the Prince to fulfill a higher destiny.

The English dialogues are very appropriately worded and lend a distinct charm to the story. Almost all the principal artistes have delivered their dialogues very well in addition to their excellent histrionic work.
The court dancer is impressed with the teaching that greater love lies in sacrifice.

And the next day when the Prince arrives to take his beloved away the court dancer is not ready, but on the other hand disillusions the Prince by telling him that he was of no use to her if he had to give up the throne. The Prince is broken hearted and he returns home a wiser man.

At the eleventh hour, the Prince comes to know, through the now repentant High Priest, of the virtue and loyalty of the court dancer and he rushes to her house to save her, but he is too late.

The beloved has already made her supreme sacrifice and departed from this world.

I salute Producer Jamshed Wadia of Wadia Movietone for his pioneering enterprise in producing India’s first picture in English- “The Court Dancer”. When this picture goes across the seas to the foreign countries, it will be the most eloquent ambassador of our thrice unlucky home land. I know what it is to be an Indian in those arrogant foreign countries where every coloured man is taken for a barbarian. I congratulation all- the director, the technicians and the artistes for contributing their best to this excellent enterprise. In the proud smile of the stray and lonely Indian lost in the foreign country today, will they get the reward of their labour. For, truly as a cultural propaganda, “The Court Dancer” is a patriot’s gift to the nation. - Baburao Patel
AN INVALUABLE PICTURE

The English dialogues are very appropriately worded and lend a distinct charm to the story. Almost all the principal artistes have delivered their dialogues very well in addition to their excellent histrionic work.

The dance and song interludes, kept in their original state, provide a welcome contrast with the spoken sequences and at the same time contribute considerably to the cultural atmosphere of the story.

Altogether, it is a rare picture not to be missed under any circumstances and even if one has to travel miles for it, it is worth the trouble and expense. “The Court Dancer” is a new experience and as such it is invaluable.

This article is a reproduction of the original that appeared in the October 1941 issue of Film India magazine, edited by Baburao Patel.