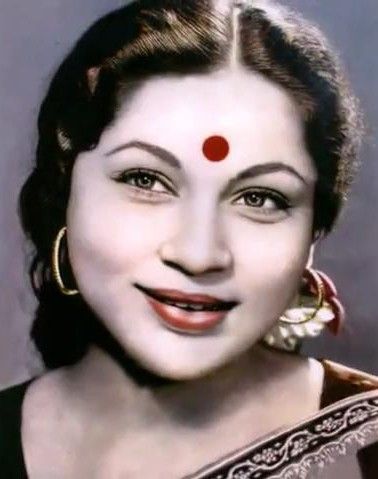 Whenever one mentions a mother in Hindi Cinema, the first face that comes to mind is Nirupa Roy. Though the audiences of 1970s and 1980s might associate Nirupa Roys image with that of a filmi mother, patrons of the golden era of Hindi cinema are well versed with the fact that this actress started her career as a heroine and that she was one of the very successful heroines of her time. And not just that, tremendous hits like Jeevan ki veena ka taar bole, Aa laut ke aaja mere meet, Zara saamne to aao chhaliye, Mera chhota sa dekho ye sansaar hai, Chaahe paas ho chaahe door ho, Dhalti jaaye raat, Kyon mile tum humand mai yahaan tu kahaan mera dil tujhe pukaarewere filmed on none other than Nirupa Roy

I met Nirupa Roy at her house in Embassy Apartment situated on South Mumbai's Nepean Sea Road. A big apartment made by joining 3 flats on the ground floor, a big lawn behind the house adjoining the Arabian sea, beautiful marble sculptures bedecking the lawn, 4 hours spent in tête-à-têtes, time just flew by. Nirupa Roy was born on 4th January 1931 in Gujarat's Valsad city to a traditional Gujarati Chauhan family. Her father used to work in railways and other than her parents, the family was completed by Nirupa Roy and her sister. Nirupa Roys real name was Kanta but her parents used to lovingly address her as Chhibi. While she was studying in school during 1945, at the tender age of 14 years she was married off and from Kanta Chauhan she became Smt. Kokila Balsara and went to Mumbai. Her husband Kamal Balsara was working as a Rationing Inspector and aspired to be an actor, a desire that couldn't find fulfilment.


She was also bestowed with her screen alias Nirupa Royin place of Kokila Balsara by the owner of Sunrise Pictures viz V.M. Vyas.

According to Nirupa Roy, her marriage was just 3-4 months old when her husband saw an advertisement by Sunrise Pictureslooking for a fresh face for their Gujarati film Ranakdevi  (1946), for which he promptly applied. When he was called for an interview, Nirupa Roy also accompanied him. Though her husband was once again unsuccessful in the interview, Nirupa Roy was immediately offered the role of the female lead without an interview. On her husband's insistence, she agreed to do the role however, later on she was given a different and smaller role to play. She was also bestowed with her screen alias Nirupa Royin place of Kokila Balsara by the owner of Sunrise Pictures viz V.M. Vyas. Later on, her husband also started using the surname Royin place of Balsara. The film Ranakdevi was released in the year 1946.

In those times it was not considered virtuous for people from good families and especially for girls and ladies to work in movies. As soon as news of Nirupa Roys involvement in movies spread, her family and the society broke out in a furore. Her father put out the word that if his daughter should work in movies, then, the family would cut all ties from her forever. Nirupa Roy said, “The societal outburst cooled down right after the release of the film Ranakdevi but my father held on to his words. He really didn't see me till his last dying breath. In fact, while he was alive I would meet my own mother clandestinely."

According to Nirupa Roy, “For the 1955 film Munimji, I had accepted the role of portraying the heroine's journey, from her youth to old age, as a challenge. I had completed the shooting of the film but I just didn't realize when my scenes where I was playing a youth were cut and I was replaced in those scenes by Nalini Jaywant. I was so shaken up by this foul play that even receiving Filmfare's Best Supporting Actress Award couldn't lessen my pain. I even tried to change my mythological and historical films image by doing a couple of stunt films like Sindbad-The Sailor (1952) and Baazigar (1959) but the audience couldn't accept Devi in such aggressive roles. In retaliation, I got so many hate mails that I didn't have the courage to attempt stunt films again in the future.”

"I was especially identified as Amitabh Bachchan's reel mother."

Towards the beginning of the 1960s decade, Nirupa Roy had become a full-fledged character artist. She received Filmfare Best Supporting Actress Awards for her roles in films Chhaya (1961) and Shehnai (1964). She essayed the role of a mother in many films like Chand Aur Suraj (1965), Aya Sawan Jhoom Ke (1969), Aan Milo Sajna (1970) and Chhoti Bahu (1971). But after the 1975 hit film Deewar, wherein she played Amitabh Bachchan and Shashi Kapoor's mother, she was firmly established as a Filmi Mother.

According to Nirupa Roy, “I played a mother to many big stars in many films like Maa (1976), Amar Akbar Anthony (1977), Muqaddar Ka Sikandar (1978), Suhaag (1979), Gautam Govinda (1979), Kartavya (1979), Ganga Meri Maa (1982), Ganga Jamuna Saraswati (1988), Ganga Tere Desh Mein (1988) but I was especially identified as Amitabh Bachchan's reel mother. I kept busy with acting until the middle of the 1980s decade. And then slowly work started to decline. Made in 1999 films Laal Badshah, Love You Hamesha and Jahan Tum Le Chalo are my last releases. I played Jimmi Shergill's paternal grandmother in the film Jahan Tum Le Chalo.


Nirupa Roy was honoured with the Filmfare – Lifetime Achievement Award in 2004. In a career spanning 55 years, she acted in almost 300 Hindi and 16 Gujarati films. Her immediate family consists of her husband Kamal Roy, 2 sons Yogesh and Kiran and a granddaughter and a grandson. She has also raised her sister-in-law's daughter Rekha as her own and has gotten her married. Rekha Parmar stays in London with her husband.