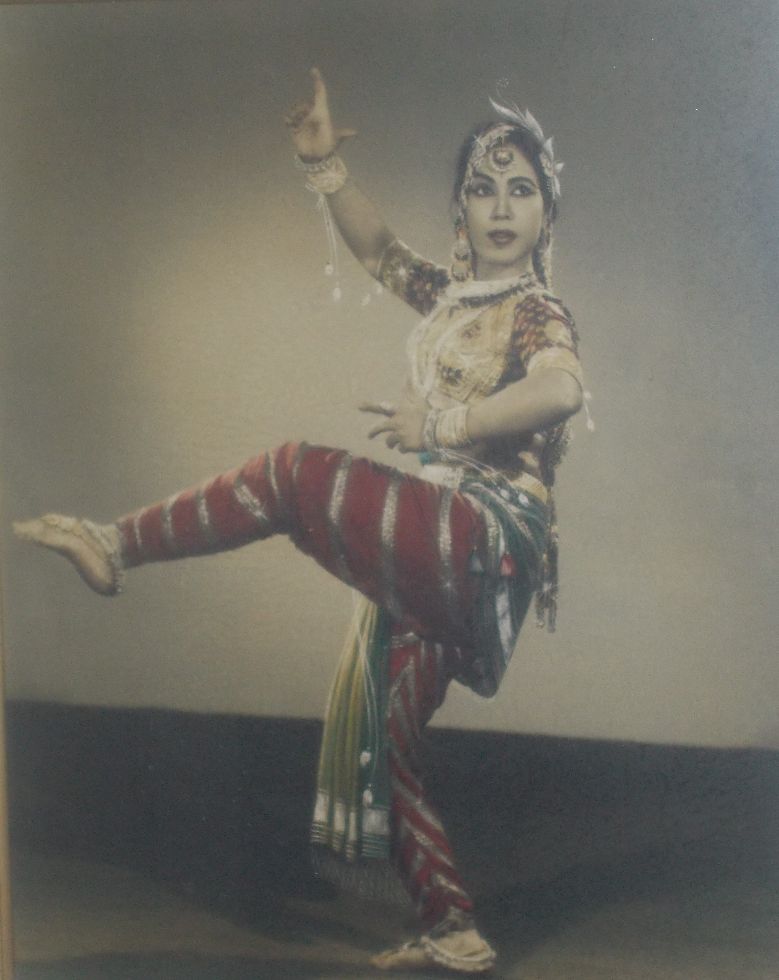 Whenever Kathak is mentioned the first name to come to mind is Sitara Devi. It won’t be wrong to say that Sitara Devi and Kathak dance complement each other perfectly. Where the common man is concerned, the name Sitara Devi may be a familiar and known name for them but what they might not be well versed with is that towards the end of 1930s Sitara Devi actually emerged as a Sitara i.e. a star actress of Hindi cinema. In the 1940s she did many films as a heroine. She also played the vamp in some, and then, in the second half of the 1950s, she bid adieu to acting and completely immersed herself in the practice of Kathak dance. It might be that the 90 year old Sitara Devi’s body may have begun to show signs of aging, but her dedication and zeal for Kathak is still as fresh as that of a youth.

Sitara Devi tells us, “At that time director Niranjan Sharma was making a movie Usha Haran in Mumbai in which Zubeida’s sister Sultana was cast as a heroine. For another role in the movie he wanted to cast a small girl who knew classical dance and to find such a child they met with the courtesans of Benaras. In contrast to cities like Lucknow, Agra, Delhi, Kolkata and Lahore, the courtesans of Benaras were mostly Hindus.  Because they were largely unfamiliar with classical dance, on the advice of the famous singer Siddheshwari Devi, who herself was from a courtesan’s family, Niranjan Sharma came to meet my father. We used to stay in Kolkata but we visited Benaras quite frequently. Niranjan Sharma saw me dancing in my father’s dance school and choose me for that role in his movie Usha Haran. And subsequently in the year 1933-34, I went to Mumbai. I was 12-13 years old at that time.”
It took 6-7 years to make Usha Haran and the film was released in 1940. But it didn’t take long for Sitara Devi to get work.

(As per senior film historian Shri D.B.Samant, Tara Devi had married the then famous actor Maruti Rao Pahelwan, also her costar of films like Matsyagandha and Shahi Lakad-hara, and a few years later the two left Mumbai and settled in Dhule city.)
Sitara Devi got her first break as an actress in Sagar Movietone’s movie Judgement Of Allah/ Al-Hilal in the year 1935 which was also Mehboob Khan’s first directorial venture. This film’s music director was Pransukh M.Nayak. The main leads were M. Kumar, Sitara, Yakub and Indira. Sitara Devi tells us, “At that time playback had not started and we ourselves had to sing songs in front of the camera. I too have also sung many songs like that for my films. Along with essaying important roles in films like Kumar Movietone’s Nazar Ka Shikar (1936), Golden Eagle Movietone’s Prem Bandhan (1936), Taj Productions’ Zan Mureed (1936), Hans Pictures’ Begunah (1937), Prince Movietone’s Calcutta After Midnight (1937), Sangeet Film Company’s Jeevan Swapna (1938), Sagar Film Company’s Mahageet (1937), General Films’ Baghban (1938), Ranjit Movietone’s Professor Waman M.Sc. (1938), in the year 1938 she got a chance to work under Mehboob’s direction once again. This was Sagar Film Company’s film Watan (1938) where Sitara Devi’s co-artistes were Kumar, Bibbo, Yakub and Maya Banerji, music director was Anil Biswas. Sitara Devi had sung a few songs in the movie as well. Sagar Film Company’s film Mahageet (1937), composed by Anil Biswas was the first film to be made in Mumbai where playback was used, although playback had already been introduced in New Theatres’ film Dhoop Chhaon in Kolkata in 1935.
In the year 1939, Sitara Devi played the main lead in Ranjit Movietone’s Nadi Kinare, Supreme Pictures’ Meri Ankhen and General Films’ Pati Patni, while in 1940 she was seen in important roles in Ranjit Movietone’s Aaj Ka Hindustan, Achhut, Holi, Pagal, National Studios’ Poojaa, Popular Films’ Haiwan and New Theatres’ Zindagi. Achhut was Gauharjaan Mamjiiwala’s last film as an actress where under Gyan Dutt’s music, Sitara accompanied by Kantilal and Vasanti, sang Bansi bani bansidhar ki, tum radha bano nat-nagar ki, which was penned by Pyarelal Santoshi. In the movie Haiwan, Sitara has acted with both her sisters, Alaknanda and Tara Devi.
At Ranjit Movietone, Sitara met the era’s famous singer-actress Waheedan who had worked under the banner for movies like Professor Waman M.Sc., Prithvi Putra (1938), Rickshaw-wala, Secretary (1938), Thokar (1939) and also for Sagar Film Company’s film Alibaba (1940) directed by Mehboob where she had won over the audiences with not only her acting but also her brilliant singing. Waheedan’s younger sister Jyoti was also a singer-actress who had worked in movies like  Sagar Movietone’s Comrades (1939), Ek Hi Raasta (1939), National Studios’ Mehboob directed Aurat (1940) and Sanskar (1940). Shortly thereafter Waheedan fell ill and returned to her parents’ house in Fatehabad where she finally passed away. Meanwhile Jyoti had married singer-actor G.M.Durrani. At the time of Waheedan’s death, her daughter Nimmi was 7 years old. She later became a star actress in Hindi cinema herself. Even today Sitara Devi remembers Waheedan with a lot of respect and tells us that she had given Jyoti her screen name.
Sitara Devi remembers Waheedan with a lot of respect and tells us that she had given Jyoti her screen name.
In the beginning of the 1940s, Sitara Devi was seen as the heroine in Circo Productions’ film Swami (1941) where her romantic lead was P.Jairaj. Made under the direction of A.R. Kardar,  the film featured Sitara Devi singing a solo and a few duets with Rajkumari and Khan Mastana in this film. In 1942 she was seen as the lead actress in Ranjit Movietone’s Dhiraj and Dukh-Sukh.

(In contradiction to Sitara Devis story, Shri D.B.Samant says that K. Asif had nothing to do with Hind Pictures other than that that he was Nazir’s nephew. Nazir did not like K. Asif’s almost daily presence in the studio and hence he opened a tailoring shop for K. Asif in Dadar TT.)

With Guru Dutt’s death in the year 1964, the film Love and God remained incomplete. Some years later K. Asif replaced Guru Dutt with Sanjeev Kumar and started shooting afresh. Sitara Devi says, “On 9 March 1971, I was performing in Mumbai’s Shanmukhanand Hall. At 2 AM after reaching home I got to know that K. Asif is no more.  He had gone to meet Sanjeev Kumar and at around 6 PM at Sanjeev Kumar’s residence, he suddenly collapsed and died instantly. He was just 48 at that time. After his death, me being his legal wife, I performed the various final rites like “Shaiyadaan” as per Hindu traditions at my level residence.”

Padmashri, Sangeet Natak Academy award, Doctorate from Khairagadh University, Kalidas Samman, Maharashtra Gaurav Puraskar, Rasik-Ranjana, Nritya-Nipuna, having acquired dozens of such awards, Sitara Devi used to stay at South Mumbai’s famous Peddar Road till around 3 years ago. At present, she stays at Aramnagar in Andheri (West)s 7 bungalows area.  She is Dilip Kumar’s adopted sister and has been regularly tying him a Rakhi for the last few decades. Having shunned the Government of India’s Padma Vibhushan award, Sitara Devi says, “If you want to honor me then do it with a Bharat Ratna. I have dedicated my entire life to Kathanritya, and for a dancer like me, any honor other than a Bharat Ratna is not an honor but an insult.” Sitara Devi passed away in Mumbai on 25 November 2014.