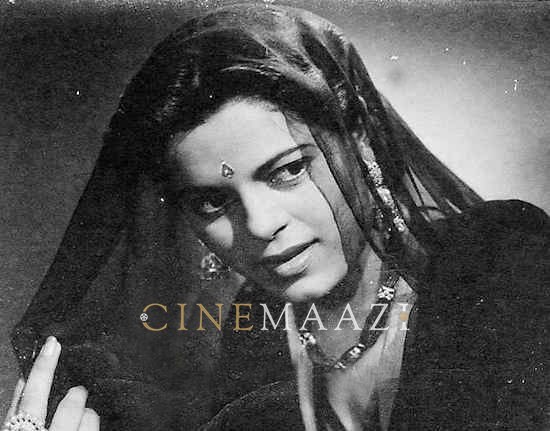 Neena Maker was a young and vivacious girl who got her first break in Hindi films in Sheikh Mukhtar’s Annadata (1952). Possessed of an irresistible native charm and a flair for acting and dancing Neena was among the rising stars of Hindi Cinema. Tragically, Neena died too soon and was replaced by her younger sister Nirmala Maker (screen name – Nimma) in Teen Tasveeren (1954) to play her sister’s unfinished role.

When the last show of Omar Khaiyam Films’ Anndata was taken, everyone told me I had done well. Some even said I had done exceptionally well. So I said to myself : “Chalo sab theek hai! (Thank God, all is well). Now I can have a real spell of rest and quiet.”

For I had never before appeared in a film and was apt to be nervous and easily upset. They were all very kind to me, of course, and didn’t mind retakes. That put me at my ease and took off some of my fear and by the time they were writing “The End” I had become pretty hard-boiled, for I was beginning to be told I was a born actress!

But sab, I am afraid, was not theek. There was still a great ordeal ahead – the premiere of the film at the Lamington theatre. Only I didn’t know it until I actually went there with my parents and sister.

I had had no idea before, of course, what a nerve-racking time I was letting myself in for. All the bigwigs of the film industry were there and a whole sea of pressmen and photographers. Everyone talking at the same time and wanting to know who I was, where I came from, what brought me into films, and so on. And the pressmen insisting that I must have acting in my blood! And the cameras clicking…clicking…endlessly until I had my heart in my larynx.

My father whispered to me: “Be very careful what you say. And how you behave. Some of these producers might want to sign you up. Watch your step!” So I watched my step (literally) and ran my head into a pillar. “To the blazes with watching my step,” I groaned, lifting my eyes to watch the crowds.

First night crowds are a thrill. You’ve never been so on tenterhooks as when trying to anticipate their reactions. Your entire career hinges on it. An applause, and you stay put. A boo – and you’re gone, out for good.

Someone asked me, “Who’s that gentleman you were talking to just now? I looked at the questioner. He was a good-looking fellow, probably a journalist trying to put Walter Winchell out of his job! I thought he deserved a bright answer. So I drew myself up – haughtily, I hope – and said sweetly: “He is no gentleman Sir. He is my father!” I was dismayed to observe that he slunk sheepishly away and got absorbed in the crowd. I wasn’t very popular with dad, either, I noticed. “So, that’s what chestnuts do to you on a first night,” I told myself wrily.

My mother, always fearful of sharks, said to me: “If someone proposes marriage, don’t accept. It’s just first-night ardour.” I’m afraid her fears proved quite groundless. No one proposed marriage, although I did bag a number of invitations to tea and lunch with the gentlemen (young and sweet) of the press. I hope I made my non-acceptance of them sweet enough to deserve mention in their columns!

Then I heard a film producer say to my dad: “Your girl has given quite a good performance, you know. I’d like to have her in my next film. Why don’t you come and see me in my office one of these day?” Why, indeed. We discussed it that night and found that maybe we’d like to give him a miss, because my sister (an encyclopedia of films) came out with the depressing information that out of the six films he had launched so far, five had had a two-week, half-house run in the city. The sixth had never been completed.

And then every pressman seemed interested in my life – (I propose to have someone ghost-write my autobiography yet.) What did I like for dinner? When was I born? Was I a Jewess? Engaged to be married? What sort of a man would I pick on when I was? Surely a first-night press quiz beats all the questionnaires ever issued by any Government in the world.

I discovered that quite a portion of my work in the film had been cut. That gave men a pang. It was quite good work – with a sad song and dance in it, too. But I suppose they had to pick on me, the newest member of the cast, in order to cut down the film to a decent length. Another first-night blessing. You’ve dressed up for the occasion and are looking forward to seeing all your numerous close-ups. And then “The End” comes and you find half of your work snipped off. A disappointment, but inevitable, I suppose.

Whew… I had never bargained for the topsyturvyness of a first night. I’m still in a daze. Why I am in the films, too, after all that beats me. But I suppose it’s an inner urge or something and I cannot escape it.

Cinemaazi thanks Sudarshan Talwar and Cineplot for contributing this interview which was conducted back in 1952.