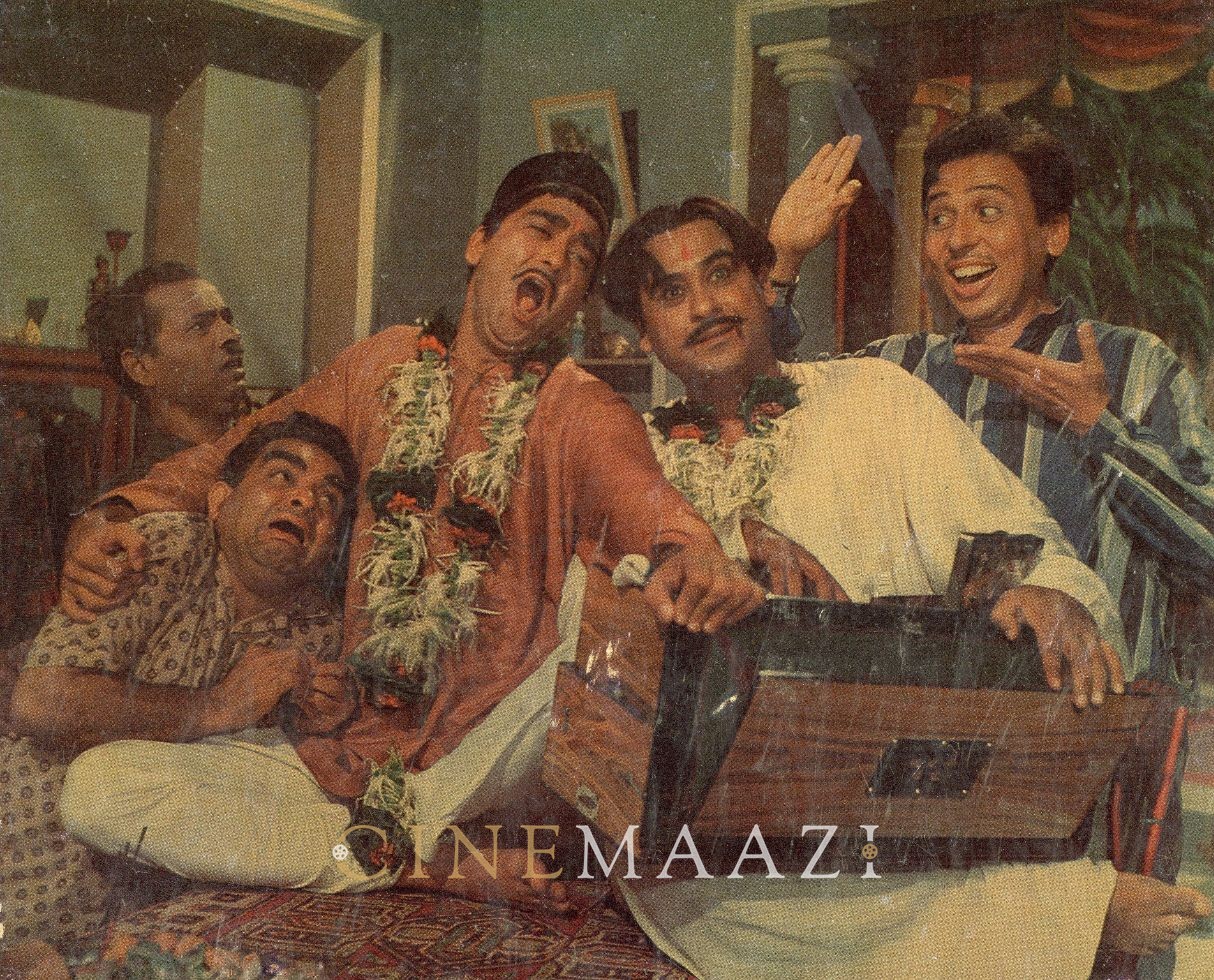 An image of Padosan from the Cinemaazi archives

One of the fondest memories I have is a long drive amidst the tea gardens of upper Assam with the song Kehna Hai playing on the tape. I loved the melody and the song instantly. It was Ek Chatur Naar that I would recognise Padosan with, years later. Much later, I came to realise that Kehna hai, Mere Samne Wali Khidki Par all belonged to this same film- Padosan. I saw bits and parts in different telecasts of the film, and it wasn’t until recently that I watched the film in its entirety.

Padosan, directed by Jyoti Swaroop,  is celebrated as a must-watch Hindi film for its comedy and music. It is a familiar narrative with cliché characters and narrative arcs – a love story between the simple innocent boy Bhola (played by Sunil Dutt) and the girl next door Bindu (played by Saira Banu). Bindu’s music teacher, Master Pillai (played by Mehmood), offers the narrative the love triangle and comic relief with his broken Hindi spoken by a South Indian man. Bhola’s saviour in tough situations, who guides him in his love affair is Guru Vidyapathi (played by Kishore Kumar). As the film was released at a time when  theatre had a massive audience as an art form, the film incorporates it through the character of Guru Viyapathi and his co- Kolkatiya, Banarasiya and Lahorie. Kishore Kumar owns the role of an  exaggerated version of a theatre fellow with paan stained lips, dhoti and shawl along with talents and knowledge to woo a girl.

One of the fondest memories I have is a long drive amidst tea gardens of upper Assam with the song Kehna Hai playing on the tape.
As the famous saying goes, “Everything is fair in love and war!”.  Dating has never been just a simple story.  It always required planning to impress the partner, some amount of deception of one’s true self, carried out with good intention (of course!). As most love stories in films (perhaps in real life too!) go, there was some amount of deception and trickery involved in the union of Bhola and Bindu.  The couple accidentally meets twice, and by the second time Bhola obviously has the starry eyes for Bindu. He is happy for the coincidental meet-cute. Post that, the seductive game of dating begins. Bhola’s secret weapon is his friend and master- Guru along with three other people from the theatre- Kolkatiya, Banarasiya and Lahorie (each of them speaks with a hint of the region they represent). It was Bhola who played the game of deception. He pretended to be a singer while lipsyncing to Guru Vidyapathi’s voice.  Bindu, on the other hand,  played her cards by taking advantage of Master Pillai’s affection for her to make Bhola jealous. At the same time, Master Pillai plays his own little sideshow, making it a lopsided love triangle, ultimately used for comic relief.

Bhola’s deception gives the film and the audience some lovely melodies that are still popular, like Kehna Hai and Mere Samne Wali Khidki. Yet, what’s most memorable out of that deception is the classic song Ek Chatur Naar- a dynamic jugalbandi in Hindi cinema. While most of the film is shot in a static camera with sight addition of  pan or zoom shots occasionally, the cinematography in this song does justice to it.  The free-flowing camera that moves from one window to another, inside one room to the other – Bindu and Master Pillai’s to Bhola and Guru’s room.  The rapid cuts show how Guru and Bhola are trying to coordinate with each other and keep up the facade but also continue this duel with master Pillai.  Interestingly, Bindu and Master Pillai are almost always facing the camera directly, while Bhola and Guru are shown slightly from the side to show the facade they pull off. This song also captures the whole essence of the film: Guru helps Bhola who is in love with Bindu. Bindu enjoys the attention, likes Bhola but uses Master Pillai’s attention for her purpose. And Master Pillai is engrossed in impressing her.
As someone who is talking about the film in 2019, there are few things that are hard to ignore. The underlying patriarchy that is seen is one such thing.
As someone who is talking about the film in 2019, there are a few things that are hard to ignore. The underlying patriarchy is one such thing. The peeping toms of Padosan that spy on Bindu are extremely creepy, if one ignores the comic element they are intended for. In fact, many of the comical acts in the film are made up of Bhola and Guru’s group stalking her and invading her privacy. But of course, it comprises of moments like Master Pillai calling a plant “khujli wala jhar”, which is funny in the moment.

Bhola is seen ardently following the instruction of celibacy prescribed by the scripture he often reads. According to the scripture, a man should settle into  family ties from the age of 25 onwards - implying a man's sexual life should be based on the institution of marriage. This clearly makes the point that premarital sex, even for a man, will ruffle some feathers in society. In today's digital age, such depiction is not as common.

Another utterance of threatened masculinity occurs when Guru & co shame Bhola for getting slapped by Bindu. They persuade and convince him to take revenge by slapping her back. Apart from it, when Bindu declares her love for Bhola, she also assumes a more submissive role in the traditional sense. This is justified in the song, Sharam aati hai magar aaj yeh kehna hoga, ab humein aapke kadamo mei rehna hoga where she sits by his feet. This shows how she submits to the man and is ready to worship and devote herself to him. Why Padosan is still so refreshing is because, despite this, there is an agency to Bindu. Upon learning about the facade that Bhola and Guru have pulled off, she takes her stand and breaks up with him. It was unexpectedly assuring and yet hilarious, that she naively decides to marry Master Pillai at that moment. Despite it being obvious that she does it just to make Bhola jealous. Although the film ends with the two protagonists reunited, she did seem sincere with her decision briefly. It only seems fit that their reunion occurs due to the same reason they broke up in the first place - Guru’s orchestrated deception. On Bhola’s fake death, Master Pillai even gives up his bride to him and pushes her parents forward to bless the union.  Master Pillai being the butt of the jokes in the entire film with his broken Hindi, is seen playing a shehnai with tears flowing down his cheeks at the entrance of the Bhola and Bindu’s wedding. Since most of the pivotal moments in the plot occurs in the park, it is only fair for the air to be cleared amongst the three-  Bindu, Bhola and Master Pillai- there. Bindu finally makes it clear that she wishes to be with Bhola and Master Pillai decides to go back home with a broken heart.
The songs from the film, composed by R.D.Burman are evergreen
As Paromita Vohra writes in her article “A Public Privacy” in Punemirror, the parks become a site of privacy for couples who can’t afford to be seen together by relatives and neighbours elsewhere. A park creates a space of anonymity that the public offers to these couples. Of course, Vohra is talking about a more contemporary situation, but it can be seen in the film too as mentioned above. To think about it, despite Bindu and Bhola being neighbours and Masterji coming to Bindu’s house for tutorials, they chose to meet in the garden/park to serenade, fight and declare love.

Padosan is a beloved film amidst the Hindi film fanbase. Its characters like Bindu, Guru, Master Pillai and Bhola are memorable. The songs from the film, composed by R.D.Burman are evergreen. It is funny with aspects of physical comedy and with its dialogues and plotline. The legacy of comedy films in Hindi cinema still heavily borrows its influences from this film.  As discussed above, there are elements of love and dating that are still prevalent which we see in Padosan- be it lovers finding space in parks or the dating games of deception and trickery played with good intentions in heart. Perhaps, it is that element of the film amongst other things which keeps it so fresh for the young audience even today.