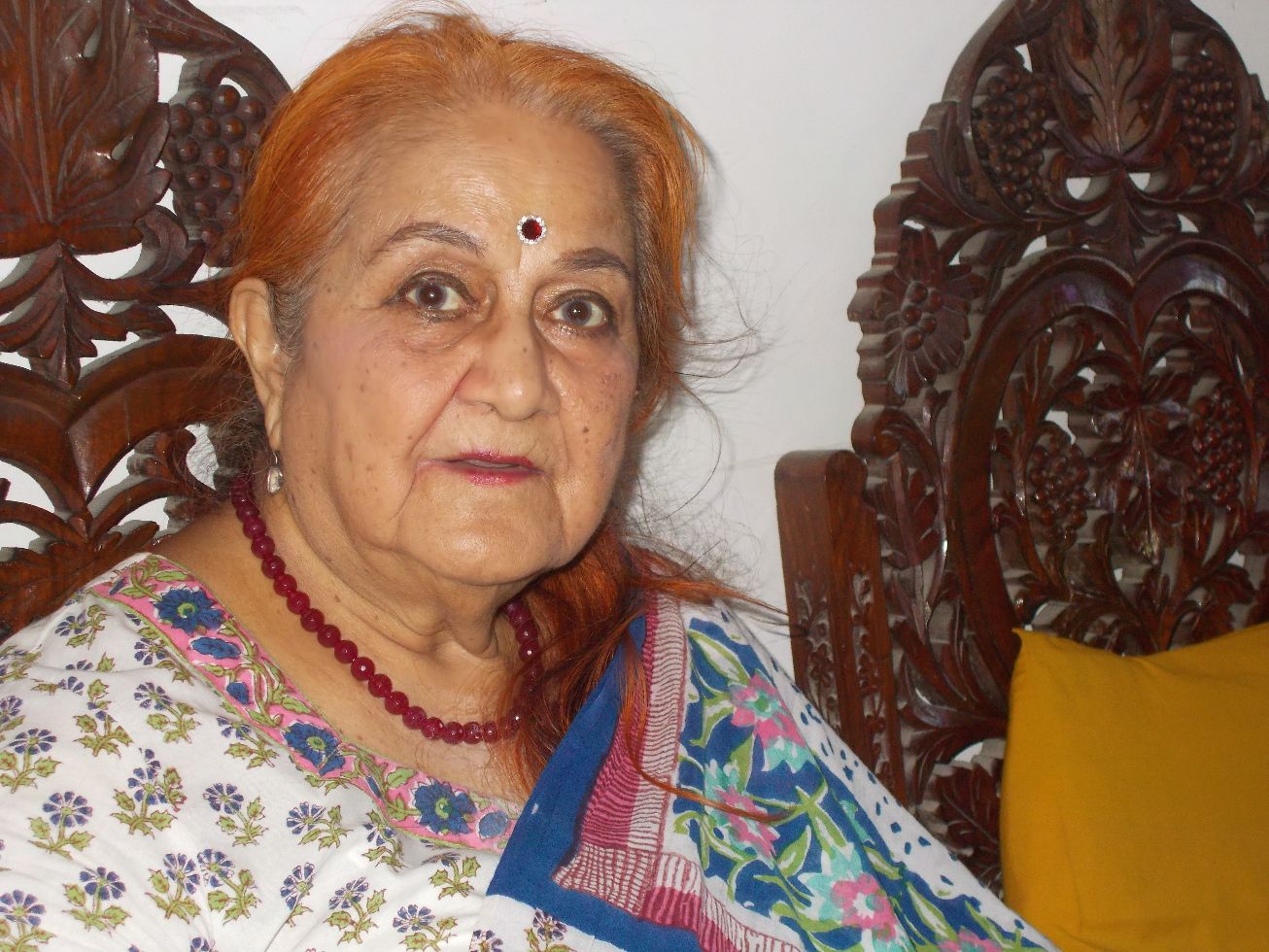 Her dream was to become a doctor like her father but she was destined to be an actress. On being persuaded by her friend, she participated in a national level talent hunt competition out of curiosity and came out as a winner. As the movie offers started to pour in, she left her medical course midway. Then suddenly she decided to marry and bid adieu to acting. The same well known actress Peace Kanwal of the 1950’s decade is today known as a successful painter and philanthropist.

I have been in regular touch with Peace Kanwal ji through phone. Recently we met again at her residence. Peace Kanwal ji’s father belonged to a Rajput family from Jodhpur and since he was from the family of Raja Man Singh, he had a close relation with the royals of Jodhpur and Jaipur. He was a doctor and worked for a missionary hospital in Agra. He also had his private hospital in Amritsar. Peace Kanwal’s mother was from an elite Rajput family hailing from Jabalpur.

Peace Kanwal says, “My father’s job was such that he spent most of his time in the towns of Texla, Lahore and Rawalpindi in West Punjab (now Pakistan). Due to his association with missionary he converted to Christianity and changed his name from Indriyaas Munshiram Kanwal to Andrew. After his sudden death in the year 1943, we shifted to Delhi. I was born in Amritsar and after studying in Amritsar, Lahore, Rawalpindi and Delhi, I got admission in Ludhiana Medical College”.

(According to Peace Kanwal ji, her date of birth is 16th December, but due to personal reasons, she isn’t willing to share her year of birth.)

"Kardar’s Dil-E-Nadan was my first film with Talat Mahmood as hero. This musical hit, composed by Ghulam Mohammad was released in the year 1953”.
Her next film Barati released in the year 1954. This was again a Kardar Productions film. In this J.K. Nanda directed film Agha was the hero and its music was composed by Roshan. Peace Kanwal says, “One day Mr. Sushil Ruia from one of the well-known business families, the Ruia family accompanied by one of his friends met me on the sets of the film Dil-E-Nadan. He then started coming to meet me often, we came close and married in the year 1955. But after marriage, it became increasingly difficult for me to work in films as Sushil wanted me to be a housewife. I got many offers but Sushil was against my acting in the films. Post marriage, I was rechristened Rajshri.”

Despite all the restrictions, Peace Kanwal occasionally acted in films. Her third film Kismet as the leading lady was released in the year 1956. Ranjan was the hero of this Nanabhai Bhatt directed film and the composer was Chitragupt. In the year 1957, she gave birth to a son. She was then seen playing character roles in films like Barsaat Ki Raat, Nai Maa and Maa Baap released in 1960 and Aarti released in 1962. Peace Kanwal says, “I could not cope with my husband and eventually we separated legally in the year 1968”.

Peace Kanwal always had a passion for social service. She had a long association with the organization named Friends of Children. Now with ample time at hand she also joined the War Widows Organization as vice president which was headed by Nargis Dutt. Simultaneously she also devoted time for the wellbeing of homeless children as president of the Lioness Club-District 323/A-3 for a long time. Peace Kanwal also got recognition as an excellent painter. Her painting exhibitions were frequently held at the Lalit Kala Academy (New Delhi) as well as in many countries including Australia and USA.

Peace Kanwal says, “During one such exhibition held in the year 1976, ex-President of India Mr. V.V. Giri’s grandson (his daughter’s son) Mr.V. Mahesh came in contact with me. Even after the exhibition ended, he often met me. During such meetings he came to know all about my personal circumstances. Eventually he proposed to me and we married in the year 1977”.

Presently, Peace Kanwal lives with her husband Mr.V. Mahesh in a posh building near Juhu Beach in Vile Parle (West). Her son from her first marriage with his family is also based in Mumbai. Peace Kanwal has no ties with the film world now. She acted in the 1979 release Chambal Ki Kasam, 1984 release Aasmaan and was last seen on the big screen in the 1991 release Woh Subah Kabhi To Aayegi. Peace Kanwal is now completely into social service and painting.