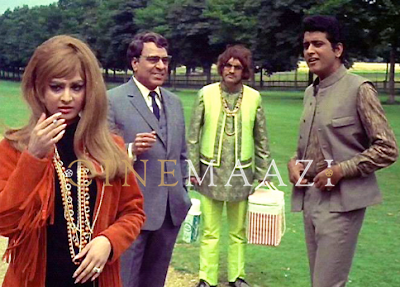 A still from Purab Aur Pachhim (1970) that took several jabs at the British. It performed very well in the box office.

An interesting paradox of the cinema is that whereas when it wants to enlist public opinion for a certain cause or community, it can do so positively by projecting a sympathetic image in a straight forward manner, when it wishes to create a bias, it must do so by implication. To be effective, this has to be repetitive. The insidious inculcation of prejudices has changed through the years, as has the object of the bias.

In an imperialist age, all the colonies were automatically peopled by sub-human and essentially immoral people. Only those who remained steadfastly "loyal" to the rulers were the real good ones, like the Gunga Dins. The rest were automatically of villain status. The Red Indians who had been dispossessed of their own land were shown in the American "western" as vicious savages for a good few decades. Once, as in Geronimo, an incontestable national figure got our sympathy, in spite of the attempt to portray him in black and even if he was on the wrong side. But that was a rare case. It was only with Broken Arrow, as late as 1950, that the Red Indians were shown in a more realistic light and for once the villain was a white man. The fact that there was an inter-racial marriage showed a certain unexpected daring, even if the heroine was liquidated in the last reel to maintain the status quo of current censorship. From then on, the Red Indian has succeeded in establishing himself as a human being, despite the patronising tone of the movies which followed Broken Arrow for a while.

The community that was worst off in this matter was the Negro-right from the start. D. W. Griffiths, the father of the cinema in a sense, created his masterpiece Birth of a Nation (1915) round the Civil War theme, where only the Uncle Tom variety of Negro was given a human status. (It is ironical that his next masterpiece was a study of Intolerance (1916)!) The artistry of Birth of A Nation was severely marred by this parochial approach to the coloured section. After World War II, the Negro situation was also given a new look in the cinema. The result was Home of the Brave (1949), Pinky (1949) (a sort of inverted cheating) and No Way Out (1950) (among others), which set Sidney Poitier up in business in a big way as the charming, sensitive, "as good as us" variety of Negro, with the shadow of white patronage over him till Lilies of the Field (1963). Prior to this, during the war years themselves, the essential villain was the German followed in a big way by the Japanese. The late Errol Flynn recaptured much of South-East Asia (in Objective Burma) almost single-handed by the weirdest intuition, based, one suspects, more on the colour of his skin than any superior brain power. And there were a whole host of other such supermen too. Doubtless, from the German and Japanese point of view, the American and British must have made equally exaggerated villains.

Later still, with the MacCarthy era of political witch-hunting, the "leftist" or even the vaguely suspected non-rightist, became the arch-criminal, and all Russian and indefinable Central European villains had a hey-day. Today everyone has got so touchy about spies, undesirables and downright evildoers that they have a sort of international aura. And there are as many discredited villains of American origin as others, so the prejudice is more widely dispersed to prevent any particular community from taking justifiable umbrage!

With the greater sophistication of the cinema, a more subtle attitude must perforce prevail, and it is now more suggestive and perhaps the nuances escape the less observant. Our cinema being of the less sophisticated variety, and we having been denied the privilege of openly or overtly taking a dig at our rulers and enemies, it seems to be making up retrospectively for lost time. Now nothing foreign seems to have any virtue in our cinema, even though in real life the "imported" article is so high and often unjustifiably prized. One of the most popular prejudices is condemning the British and the constant suggestion that all things Indian are, for the very reason that they are Indian, good and all things British, for the very reason that they are foreign, bad.

Take Purab Aur Pachhim (1970) for instance. One would imagine after seeing this film that drinking and smoking were the sole criteria of feminine morality and nothing else counted. The entire male population of our country can drown themselves in liquor and smoke themselves out of hearth and home without any stigma being attached to them. But any woman doing much less is automatically condemned by inference in long diatribes. Surely there must be some more rational and plausible way of suggesting that Indian culture has inalienable virtues than by condemning other cultures so childishly?

There is a clause in our censorship rules that offence should not be given to the susceptibilities of other countries. This is sometimes even stretched to avowedly unfriendly countries and after the Pakistan War, the amount of footage deleted on this score must have been phenomenal! But Britain, who at least isn't openly hostile, becomes the butt of our criticism and Purab Aur Pachhim is a box-office rage!

Among ourselves again, we tend to be incredibly sensitive. Certain communities take exception if a little sly fun, however innocent, is poked at their more popularly known foibles or predilections. The more parochial even threaten dire consequences at the implications of a double meaning (however far-fetched) in a song. A villain usually has a vague north Indian name that can apply equally to any region north of the Narmada. I've never heard of a villain called Srinivasan, for instance, in any Hindi film though I've convinced there must (for sheer good measure) be the odd villain from the south of Narmada region. We talk a lot about national integration. Why can't we integrate our no-gooders too and distribute them all over the sub-continent instead of cloaking them in such comfortable anonymity?

Our prejudices are directed largely against ideals like women not suffering appalling indignities humbly or like men trying to be neat and well-off, if not affluent, or an infringement, however logical, of the most antiquated systems sanctioned by our "culture". Lengthy platitudes about all men being brothers and diatribes against the rich milking the poor (by people who forget that Income Tax spirals like the summer heat) are some of our standard prejudices. Perhaps this is all very moral and justifiable but it merely distorts the reality more. Implicitly we believe in the emotional joint family but implicitly too, the daughter-in-law, as the outsider, is always the offender. All men might be brothers, but apparently all women are not sisters! Nobody sees the fallacy of this discrimination.

In fact, it is perhaps as well that there are so many restrictions against giving offence in one way or the other. For, despite the main speeches, the facts are all so contradictory, and one never knows where our prejudices will eventually land us. Not only are most of them illogical and insidious most of the time, but they are hardly likely to improve the current situation in any way.