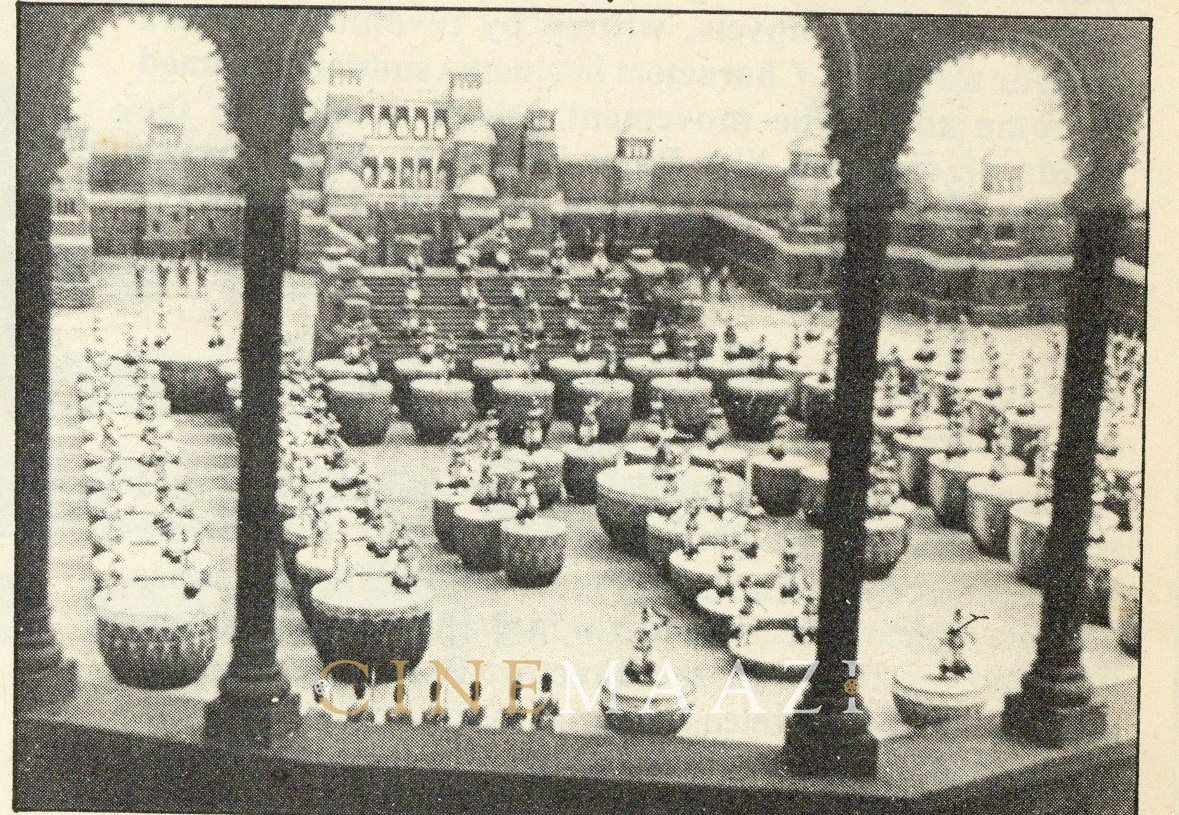 It was exactly fifty years ago that the first full-length Tamil talkie was screened in Madras. The year was 1931 and the picture 'Kalidas', directed by H.M. Reddi. It was produced by Sagar Movietone of Bombay and featured T.P. Rajalakshmi, the then most popular actress of the Tamil stage.

All the while there were no film studios or production facilities in Madras. Along with their groups of actors, producers trekked to Bombay or Poona or Calcutta to make their films; houses were rented on monthly basis, transport was arranged to carry the artistes to and from the studios - all in strange cities. The studios supplied all the technical personnel - most of them not conversant with the Tamil language.

The one distinct advantage of film-making at Bombay and other Northern centres was that the film could be completed in about three months at an all-inclusive cost of about Rs. 25000 per film. And most, if not all, of these films reaped box office bonanzas.

While films in Tamil increased in number, mythology and legend continued as the staple material for films. Songs and stagy dialogue still crowded the film soundtracks and stage actors and actresses continued to hold sway because artistes had to both sing and talk. It was against this background that a new trend - although on a minor scale - set in. For this too, the Tamil stage was largely responsible.

Of Saints and Society

The unchallenged and unequalled King of Comedy was the great N. S. Krishnan, an institution unto himself. His inclusion in the cast was a box-office guarantee to films in those days. He had his own group of writers, song composers, music directors and artistes and often, he scripted and wrote the songs for his comedy sub-plots, all of whcih he driected himslef. And the comedy was not all - skilfully interwoven with it was a forceful 'social' message; N.S. Krishnan was as much a reformist as he was a comedian.

The unchallenged and unequalled King of Comedy was the great N. S. Krishnan, an institution unto himself.
Of Stars and Sensationalism

In 1937, producer Assandas took a unit of actors and technicians overseas to London to film 'Modern Youth', a social talkie. This created a sensation as did his payment of the then fabulous sum of one lakh of rupees to K.B, Sundarambal to play the female lead in 'Nandanar'. These could be said to be the beginnings of sensationalism and publicity build-up, glamour and star values in the Tamil film industry. Notable among the early stars and crowd-pullers was M.K. Thyagaraja Bhagawathar, whose songs were so enchantingly rendered that no sooner were his pictures released, his songs were on the lips of one and all. Films like 'Thiruneelakandar' (1933), 'Ambikapathi' (1937), 'Ashok Kumar' (1941) and 'Sivakavi' (1943) were fantastic box-office hits that steadily raised his star value till his 'Haridas' in 1944 created an all-time record by running for 110 weeks!

Thyagaraja Bhagawathar came from the stage as did P.U. Chinnappa whose pictures like 'Aryamala' (1941) 'Jagathala Prathapan' (1944) and 'Utthama Puthiran' also created box office records. Whereas Thyagaraja Bhagawathar's greatest asset was his voice, actors like P.U. Chinnappa won over audiences both by their songs and more so by their acting talent.

The mid-40s saw many changes in the Tamil film scene. With the advent of playback the ‘talking, singing’ artistes from the stage and the classically-trained musicians were gradually displaced by new entrants with good looking, photogenic faces, and high degree of histrionic talent.

From the legendary and phenomenal M.G. Ramachandran and the gifted Sivaji Ganesan and T. R. Rajakumari, Bhanumathi, Savitri, Padmini, Saroja Devi and K.R. Vijaya, to the present generation of Kamalahasan, Rajnikanth, Sivakumar, Sridevi, Sri Priya, Sujatha And Saritha, there are many numbers of stars who have enriched the Tamil Cinema-and continue to do so.

Darling of the People

Of these, the rise to fame and popularity of M.G. Ramachandaran-or as he is popularly known, M.G.R- is a phenomenon unheard of in the annals of film history in any part of the world. Though he made his film debut in a small role in the year 1936 in Sathi Leelavatji, in 1947 he was first cast as the hero in Jupiter Pictures ‘ Rajakumari’. From then on, through Jupiter’s 'Marmayogi’, Modern Theatres' ‘Ali Baba’ and ‘Forty Thieves’ and Pakshiraja’s ‘Malaikallan’, his was a stupendous ascent from success to success winning for him the titles of ‘Vasool Mannan’ (King of the Box-Office), ‘Makkal Thailakam’ (Darling of the People) and ‘Puratchi Nadigar’ (Revolutionary Actor). To millions of filmgoers, he was the savior of the downtrodden and the champion of the poor. His was no idle talk for the ideals he propagate through his films-as Chief Minister of Tamil Nadu, he could translate them into reality.

The years of the Second World War saw another change which had far reaching consequences. Because of the difficulties in the import of raw stock, the length of feature films was restricted to 11,000 feet. It was a blessing in disguise. ‘Haridas’ for instance, the picture that created an all time box- office record, was one such film.

Of these, the rise to fame and popularity of M.G. Ramachandaran-or as he is popularly known, M.G.R- is a phenomenon unheard of in the annals of film history in any part of the world.
Content-wise too, new trends could be seen. The first attempt at biographies was made in 1957 with Padmini Picture's ‘Veerapandia Kattabomman', featuring Sivaji Ganesan. This was followed by 'Kappalotiya Thamizhan', a biography of the great patriot V.O. Chidambaram Pillai, also starring Sivaji Ganesan.

In 1954, A.V.M. produced ‘Andha Naal’. It was the first picture made in Tamil without a single song or dance and which in spite of these breakaway features, was a box- office success.

The most significant event of this period, however was the entry of C.N. Annadurai- the leader of the Dravida Munnetra Kazhagam (DMK) party - into the film world. Though the first picture written by him was N.S.K. films’ ‘Nallathambi’ (1949), it was Jupiter Pictures’ ‘Velaikkari’ (1949) that was the turning point in the history of Tamil Cinema. It was revolutionary. C.N. Annadurai was an orator of great eloquence and realizing the potential of film as a medium of mass communication, he preached rationalist and reformist ideas to the people, attacking ignorance and blind beliefs with vehemence and vigor. There was an unheard of awakening in the minds of the people. ‘Velaikkari’ was followed by A.V.M.’s ‘Or Iravu’ (One Night) ‘Swargavasal’ and a number of other films, which swept Annadurai and his party, on a wave of mass support, to the seat of power. After Annadurai, the next two Chief Ministers Karunanidhi and MGR are both film world stalwarts.

The most significant event of this period, however was the entry of C.N. Annadurai- the leader of the Dravida Munnetra Kazhagam (DMK) party - into the film world.
In the ongoing progress of Tamil film-making, it must be mentioned that the Reddys made a vital contribution. B.N. Reddy founded Vauhini Pictures during 1938 and produced and directed a number of masterpieces such as ‘Devata’, ‘Sumangli’, 'Swargaseema’, ‘Malleswari’, etc. K.V. Reddy had ‘Yogi Vemanna’, ‘Gunasundari Katha’ and other films to his credit. These films were made in Telugu, but the technical finesse achieved by craftsmen like Ramnoth and Marcus Bartley, Srinivasa Raghwan And A. Krishnan made an indelible impact on Tamil films.

In 1947, B.N. Reddy founded Vauhini Studio, which was later taken over by B. Nagi Reddy, a man of immense vision, who developed the Studio into the best-planned and best-laid out studio in the whole of the East.


Vasan also pioneered colour processing in the South by starting the Gemini colour lab in the year 1958. The credit for having made the first full length colour picture in Tamil, however, goes to T.R. Sundrama of Modern Theatres, Salem, who made ‘Ali Baba and Forty Thieves’, featuring M.G.R as the hero, in 1956.

By now, production values, technical excellence and directorial skills played as important a part in the making of films as stars and stories and songs. People began to realize that was more to films than mere talking and singing. Films had indeed come a long way from the early “100% singing, talking, dancing pictures.”

This article is a reproduction of the original published in Fifty Years of Indian Talkies (1931-1981) published by Indian Academy of Motion Picture Arts & Sciences, Bombay.
1499 views

P Neelakantan was the Principal of the Film Institute in Madras.