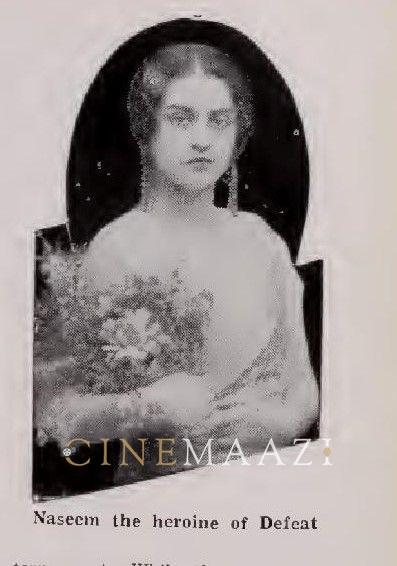 Fisherman’s Romance In A Fishy Story!

Because of its utterly indifferent recording, barring a song here and a few dialogues there, this picture may well be seen as an old silent picture with a typically old technique and primitive photography.

The story, however, had some essential good points and would have become a good screen play if only those responsible for its treatment had tried to make it more realistic and logical. As it is, it has become a weak hotch potch of intentions and ideas that never materialize throughout its boring length of 12,000 feet and over

It all begins in a fishing village, which is an hour’s run by motorcar from some city. Behari is a rich fisherman - according to the booklet - but nowhere is shown the demand for his “large haul” of fish. The “large haul,” by the way, constitutes a couple of small baskets brought ashore from a sea trip. Well, you can’t buy more fish from a market for screen purposes, knowing that it is to be wasted. From the two small baskets of fish, we must accept the entire fishing colony and Behari as a rich fisherman with a flourishing ‘trade,’ not to mention the sea (to be known as the ‘river’ in the picture) naturally full of fish. If Minerva Movietone had brought a little of the fishy smell that permeates their studios, the fishy atmosphere in the theatre would have also been complete.

Strangely enough these fishermen who are within an hour’s run from a large city become so panicky when Gopal, Behari’s son, wants to go to find his fortune, that one is amused at the antics of Gopal’s father, sweetheart and friends who give him a farewell fitting enough for a journey of at least 7,000 miles. That is exactly 6,950 miles of emotion unnecessarily wasted in these days of national economy.

Gopal is not only an expert fisherman, but he also follows agricultural pursuits and we soon find him singing at a well as the bullocks draw out the water. The song must naturally be good and sweet to attract miss Ragini a film star brought there by her director to study the village atmosphere of the fisher folks.

Ragini immediately proves that she is attracted by the haunting music coming to her from a distance and calling her nearer. She gets out of the car, and inspite of herself, sleep-walks towards those haunting notes, to complete the sequence of the heroine meeting the hero.

If you have not already guessed, it is love at first sight - very first sight of Gopal’s muscular body. The way the muscular attainments of Gopal are stressed, one wonders whether the frail heroin’s love is prompted by lusty feelings of mating.

Having met, they must part to create the craving agony of parting. So Rajni, the childhood companion of Gopal and the rightful claimant to his heart, turns up and so does Santosh the director and the dumb struck hero and heroine are at last torn apart. While they were together they had behaved as if one had seen in the other a rattle snake which rooted the other to the spot. It was a patch of highly hypnotic love.

AN IDEAL THAT DOES NOT EXIST?

Santosh the producer-director is shown as an idealist. Who, while he loved Ragini, was yet prepared to choke off his love to make her a star of stars for the sake of sheer art.
If this role is a suggestion to our producers, it is well intended. But it is certainly not an evidence of existing reality. It is perhaps too much to expect so much of a producer-director.

Now comes the outdoor camp of the movie men who had come to shoot the village scenes. The fact that they were movie people was told in the dialogues, which bad recording cleverly suppressed. The audience has therefore to guess the truth from the general appearance and the typical behavior of the movie people, which by the way is the safest way to guess. It never fails. The director, the assistant director, the star, the hero and all the different odds and props of the film world develop such characteristic traits in their appearance and manner of life that even blind men can smell them out.

By giving the audience a chance to guess this correctly, the director has really paid a compliment to the intelligence of his audience. Throughout the picture, the director has, out of sheer good manners, allowed the audience to exercise its imagination more frequently and thoroughly at several places and thus established an eternal good will between himself and the people by allowing them to take part in the actual production of the intended picture.

Having fallen in love so desperately, it is but proper for the heroine to return to the battle field of her emotions. As was expected the hero is also in the same mental turmoil. They meet once again and under the pretext of seeing more of the river go boating together with Rajni watching. It is time to expect some fireworks from Rajni, but she is a peculiar fisherwoman and does not burst out like those we find in our city markets. She weeps instead, to create some over due pathos.

Things however take a sudden turn and Ragini induces Gopal to go with her to the city to stay with her. Gopal who has also fallen in love, as is evident from his oft-blowing nostrils whenever he looks at Ragini, decides to go. Then comes the parting scene where Behari (Eruch Tarapore) tries to act heart broken. After a prolonged wholesale embracing, the hero drives away to the city by the side of the heroine.

Then those behind all look, as every one looked when Puran went away in “Puran Bhakt”. Since the day Debaki Bose did this to us, it has never been forgotten and in various shapes and twists it is never allowed to be forgotten.

SO NEAR YET SO FAR!

In the city, Gopal very soon become an expert motor driver and wears the English costume comfortably, but somehow does not learn the correct use of knives and forks. He doesn’t even know the use of the soup spoon. Had he learnt that before, the director would have lost a chance of ridiculing him in the city. Sending him back then would have become a real problem.

Gopal, however, is staying with Ragini in her own house. She is all alone - practically an orphan - having no parents, relatives and not even any pets. And Gopal who is in love with her and vice versa, also lives with her all alone. And to prove that every stranger in a film star’s house, is a safe inmate, they love each other but don’t overstep the limit.
They sing and dance together, coo and cuddle - but that far and no further says the director. Gopal however, soon discovers that he is a bad misfit in the city and goes away. No, No! Not without the heroine following him in a train, making a sacrifice, giving up her glamorous life and agreeing to share his poor man’s bread salted with honest sweat.

AH! THE PROPOSAL AT LAST!

Gopal soon gets going and starts breaking stones, carrying mortar etc. in a place which looked more like a convict colony. He returns home and makes the supreme proposal of marriage to Ragini. She had been waiting for it all this time and it had to come some time. So it is vomited here like a long accumulated bile. After this Gopal naturally feels relieved and flies off to buy his wedding presents. It is a mercy to the audience that he does not burst out into a song and Ragini does not unwind herself in the characteristic Shanta Apte whirls. No, sir, this is made more sober to make it all the more serious and realistic. It is a “touch”.

In the meanwhile, Behari (Eruch Tarapore) who had a long-winded lecture in stock for a long time, turns up and fires it off at Ragini. Ragini suddenly finds out that she had done a grave injustice to Rajni, the play mate sweetheart of Gopal and with a melodramatic film star impulse she decides to quit. The ceremonial telegram, so much abused in our film industry, is sent and very soon Santosh the producer director with love safe-deposited inside, knocks at the door.

A heart-breaking scene like that can’t go dry, so a few tears are ordered and to lend it more melodrama, sobs punctuate the words. The entire exercises over, it is now time to move. It can’t however be done without a climax. So Gopal is brought to the scene loaded with his wedding presents. He says “Ragini” Ragini says “Come on, Santosh let’s go” And they go, but not without the crying voice of Gopal following them for some time.

Gopal is disillusioned and quickly he gets back into the waiting arms of Rajni who in the meanwhile has been having a self-polishing course in the city.
It is time for Ragini to die and she does so under a tree but not without giving every one a long warning about it. It looks like a clear three days notice at her costs and consequences.

Ragini is played by Naseem. She sings a song well and does a bit of dancing pretty well. Navin, as Gopal the young fisherman, is a good casting. Maya as Ragini looks convincing. Eruch Tarapore as Behari did not till the last minute seem to know whether he was in a comedy role or otherwise. No one probably told him. Hari Shivdasani as Santosh the producer director looked it and also acted it as far as it was permissible.

In fine “Defeat” is better than “Will” and not half as good as “Pukar.” It defeats even its primary purpose of entertainment.

This is a reproduction of the original published in Film India, May 1940.