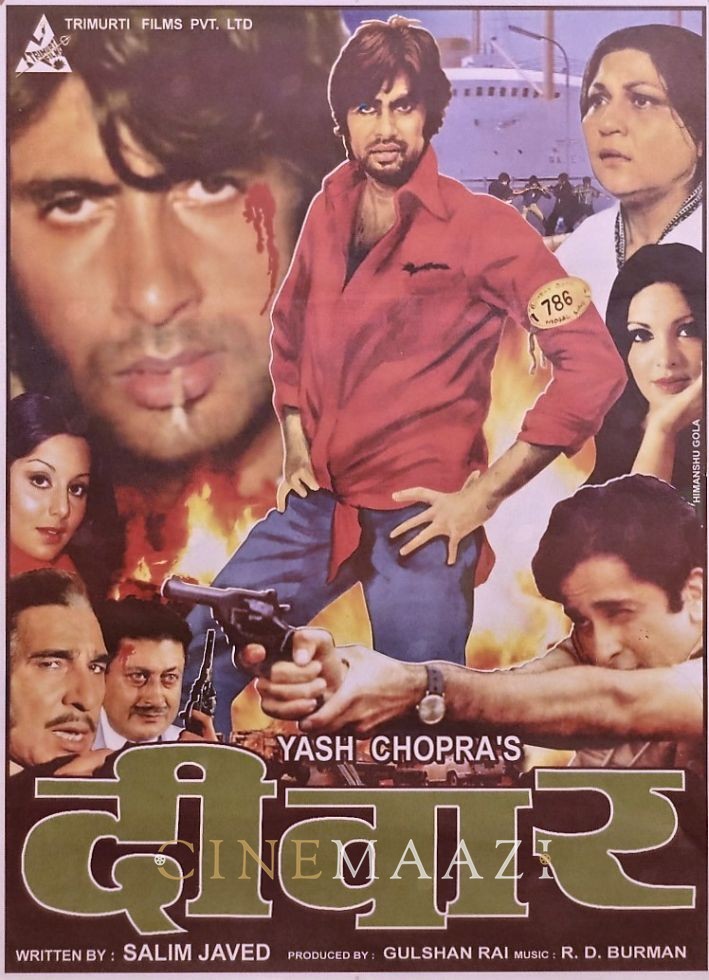 A poster of Deewar (1975) from the Cinemaazi archives

Tum mere najayaz baap ho, declared the hero at his father, and a nation woke up to a new world of anger, violence and reprisal, one where the old world withered in front of the smouldering gaze of the ‘angry young man’. This iconic line, from Yash Chopra’s 1978 multi-starrer blockbuster Trishul, was the exclamation point of a sentiment running through Hindi cinema for quite some time. Disillusionment with the older generation’s idealism and a bleak socio-economic environment led to the awareness that the well of post-Independence optimism had finally run dry. Tectonic shifts were in motion and a new kind of cinema was needed to portray them. For many, the words “Written by Salim-Javed” came to signify precisely that kind of cinema.

The legend of the Salim-Javed films, enhanced by the supernova that was Amitabh Bachchan’s stardom, is such that their films hardly need any introduction. Mere mention of the name brings to mind the images of the chilling Gabbar Singh in the desolate valley of Ramgarh in Sholay (Ramesh Sippy, 1975), Vijay’s eruption of rage at Sher Khan in Zanjeer (Prakash Mehra, 1973) and who can forget the Mere paas maa hai moment from Deewar (Yash Chopra, 1975). Much has been written of the range of influences on their work, from the spaghetti westerns (especially Sergio Leone’s Dollars trilogy and Once Upon a Time in the West) to films like Mother India (Mehboob Khan, 1957) and Gunga Jumna (Nitin Bose, 1961), the colourful pulp fiction of James Hadley Chase and Ibn-e-Safi to the brooding heroes of films like Pyaasa (Guru Dutt, 1957). Their work has been praised for memorable dialogues and riveting plots, but also derided for being too derivative and unoriginal. To their credit, Salim Khan and Javed Akhtar openly wore their inspirations on their sleeves and re-invented the oft-used tropes of Hindi cinema for an audience growing tired with the conventional social film.

In most of these films the central conflict is between idealism and cynicism, in which the ideal image of the nation is at odds with its fractured reality

The central conflicts in Khan and Akhtar’s cinema have always been crystal clear, often channelled through existing narrative paradigms. Birju from Mother India transformed into the more urbanised Vijay of Deewar, the popular legends of dacoits from Chambal (Salim Khan’s father being a police officer) and their many iterations in cinema (Mera Gaon Mera Desh, Khote Sikkay) are given new form in Gabbar Singh, the trope of siblings lost and found is used in Seeta Aur Geeta (Ramesh Sippy, 1972), Yaadon Ki Baaraat (Nasir Hussain, 1973) and Haath Ki Safai (Prakash Mehra, 1974). In most of these films the primary conflict is between idealism and cynicism, in which the ideal image of the nation is at odds with its fractured reality. The most popular vessel of representing such conflicts in Hindi cinema has always been the family, between the normativity of the older generation and the modernity of the new. The father usually stands in for either rigid conformity or failed masculinity, while the mother is sometimes the eternally suffering victim, sometimes the balancing force but always a repository of ‘Indian’ virtues. Salim-Javed deftly appropriated these tropes in their unique fashion, but most notably through a complex relationship between father and son in many of their acclaimed films.

To begin from the beginning, we need to look at the genesis of the ‘angry young man’ phenomenon. This character became Salim-Javed’s calling card, paving the way for their brand of action drama to dominate the 1970s like no other films could. It is well known that Mehboob Khan’s seminal Mother India left a deep imprint on a young Javed Akhtar, particularly the character of Birju, the rebellious son who turns to the dark side to avenge his mother’s exploitation. A prototype angry young man, we will see shades of the character in many later films, namely in Phool Aur Patthar (O.P Ralhan, 1966), Satyakam (Hrishikesh Mukherjee, 1969) and Namak Haraam (Hrishikesh Mukherjee, 1973). The proper manifestation of the character, with all the tropes that will come to define it for a decade, comes in Zanjeer. Salim-Javed famously had to petition hard for a still unproven Amitabh Bachchan to be cast for the role and it is a credit to Bachchan’s performance that no one else can be imagined in the role now. Still in its nascent stages, Zanjeer established certain aspects that become essential for the character going forward – some form of childhood trauma, a brooding cynicism and the awareness that justice is not always possible through sticking to the law.

Perhaps the most Oedipal of Salim-Javed’s work, are the three films – Deewar, Trishul (Yash Chopra, 1978) and Shakti (Ramesh Sippy, 1982). In between we also get the underrated Kala Patthar (Yash Chopra, 1979). Deewar is, by far, the most famous of Salim-Javed’s work. A monumental portrait of working class angst, moulded from the character of Birju from Mother India. Despite the ultimate death of Vijay, it is evidently clear where the sympathies of the writers lay. Yash Chopra, suffering from a crisis of confidence after the failure of Joshila (1973), borrows liberally from the grammar of spaghtetti westerns to frame Vijay, giving him an ambiguous presence. He becomes someone who is nominally the errant son, yet clearly the figure who is most identified with. In the film, his father is a committed union leader (Satyen Kappu) who is blackmailed by the factory owners to betray the cause of the workers. Unable to come to terms with this, he abandons his family condemning them to a life of poverty and deprivation. If the Vijay of Zanjeer carried his trauma in his dreams, here the trauma is literally inscribed on Vijay’s body – when the child Vijay is tattooed with the words ‘Mera baap chor hai’ by a group of workers who felt betrayed by his father. These words later become a catalyst for the life of crime he embarks on, his goal becoming to remedy the wrongs done by an absent father. It is clear that his cynicism is born of the failed idealism of his father. He clearly believes that his mother who underwent the same gruelling poverty he did will understand but is shocked when she sides with his policeman brother Ravi (Shashi Kapoor). The lingering presence of his father’s ideological commitment, represented in his mother, troubles him and ultimately convinces him to go straight. But as is often the case with gangster stories, it is far too late.