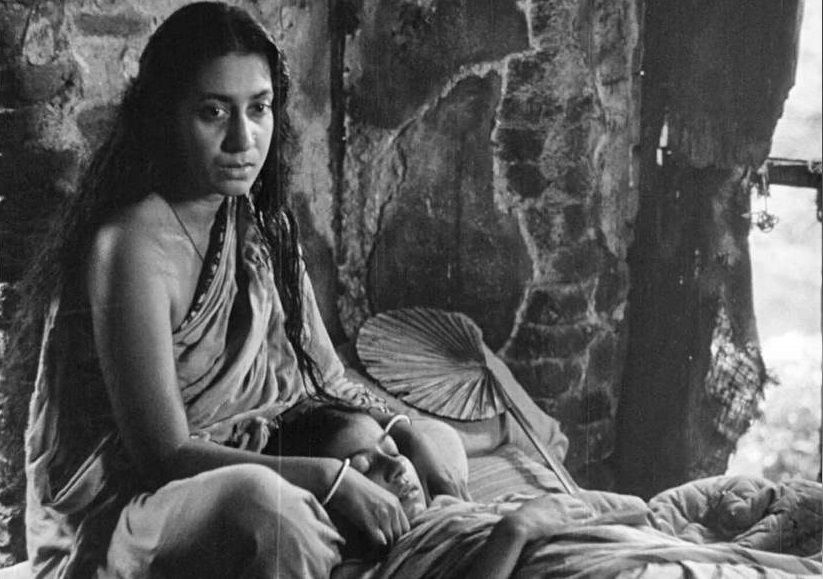 A still of Sarbojaya and her daughter Durga from Pather Panchali (1955). Image courtesy: Times of India

In 1895 (26th Chaitra, 1302 Bengali Calendar precisely), Rabindranath Tagore wrote the verse Bangamata where he starts off like this –


“Through good deeds and wrong, in sorrow and happiness, downfall and uprise,
Allow your children to flourish and grow, to full human potential realise.

Oh affectionate mother, in your lap most comforting –
As children you must not keep them forever nursing.”

and then ends with the oft quoted:
“Grab your good natured sons and push them out there

The world is theirs for the taking, let them show no fear
This great multitude of children, Oh doting mother

Confining them to a Bengali identity, you have not let them discover the greater in humanity.”

In the context of Bengali psyche, Tagore’s lines are very important to understand the mother-child relationship in the Bengali household and more importantly the mother-son sensibility.

With this drift over the few decades, the Great Famine of the early 1943 and the partition of India in 1947, the veneer of the quintessential Bengali was cracked. Though many of them migrated to other cities but that was more due to the surplus population after 1947.

Even today, at the end of the day, the average Bengali wishes to remain in his own home in Bengal and within the confines of cultural and philosophical ambit which makes him aloof and cynical of others. It is of no surprise hence to locate only a few Bengalis probably in Bombay who can speak Marathi or the ones in Bangalore speaking Kannad or speaking Tamil in Chennai – almost none of my friends and family living in these cities ever cared to delve into the local culture and language.

Interestingly, almost every Marwari in Kolkata can speak and understand Bengali, just as the most Punjabis in the city do and most South Indians who stay in Kolkata for long. This prudishness, at one hand can be attributed to the Bengali renaissance of the 19th-20th centuries which created such a flurry of moral, philosophical, literary and cultural virtues that generations of Bengali masticated on the same gleefully. On the other, and probably related is this tendency of clinging to the roots even when the surroundings have withered in terms of opportunities. In the context of Bengali cinema, the depiction of mother as the bearer and nurturer is what is expected and rational. We can however look into some of the ‘mother’ characters in some of the important Bengali cinema over the years. It is not often that the character is strong or the film relies on her largely. Yet, they are important portrayals of a time and a society whose moral values have a deep resonance in the position and status of the mother and her inherent bonding with her children.

Sarbajaya in 'Pather Panchali' and 'Aparajito'

Satyajit Ray, to Bengalis, is a subtle weak point after Tagore. There is a delicate semblance in the psyche of the two auteurs which is heightened as Ray used Tagore’s pieces for some of his most resonant films. Interestingly, Tagore’s women were, in most of the cases, far ahead of their times. Tagore had kept them individuated, strong and dynamic – equal to men and at times superior in terms of moral virtues and emotional quotient. It is by design, Tagore kept his female protagonists child-less – from Binodini to Charulata, from Bimala to Mrinal.

It has to be noted that Sarat Chandra Chattopadhyay whose novels were arguably more popular than Tagore’s at that time had placed the women at the feet of their men, subservient. Ray’s women characters from Charu to Karuna to Bimala have all been childless as well. In Mahanagar (1963), Arati had a son but it was not their relation which got precedence in the narrative. Ray, like Tagore, placed his women in relation to their men and not foregrounding them primarily as the mother of the children of the male protagonists.

However, in the first two films, the first two parts of his iconic 'Apu Trilogy', Sarbajaya as the mother of Apu and Durga comes as a very strong-willed village woman. She is firm, stern and in her relation with Indir Thakrun, quite cruel. Indir Thakrun in a sense resembles the soul of rural Bengal whose depravity is all over her body. We find Sarbajaya as a loving mother yet a bit distant at times and definitely the one who wants to keep the reins of her dilapidated family in her own hands.

In Devi (1960), which is one of his most political films Ray slants at the religious cowardice that forcibly commodifies the young daughter-in-law as the ‘Goddess’ incarnate based on an ambiguous dream awakening. In a reverse mimesis, the relationship between the old zamindar (as the devoted ‘son’) and the ‘Goddess’ daughter-in-law (mentioned every time as the ‘mother’, though she was childless in reality) was grounded within religious overtones and has definite shades of incestuous inklings.

For Ritwik Ghatak, the entire positioning of identity was different than that of Ray. Whereas Ray’s narration had primarily been based on the male-female coupledom linked on the basis of love or marriage relation, Ghatak’s testament had been mostly on a primordial one. In almost all his iconic films we find Ghatak tearing his heart on the issues of the partition of Bengal and in doing so he puts forth his characters who are mostly siblings and not a couple in the sexual sense. Even in Ajantrik (1958) where there is no sister to Bimal, Jagaddal – the car takes up the position of companion as the fellow taxi drivers tease Bimal – “Is the car a woman?” In a later scene, Bimal confides to another character that Jagaddal came into his life the year his mother passed away! In the lyrical Subarnarekha (1965), Iswar and Sita, the brother and the sister form the core and Iswar would think Sita to be his long lost mother. Once, Sita would whisper to Iswar that she indeed was his mother. In the climax when Iswar visits Sita’s room for sexual favours unknowingly Ghatak slaps the middle-class hypocrisy as he once commented – “(one) has to understand that whichever woman the brother visited would have been his sister”. For Ghatak, the brother-sister duo is representative of the two halves of Bengal – the East (now Bangladesh) and the West (in India), the offspring of undivided Bengal as he sings “Keno cheye achho go Ma, mukho paane” – a Tagore song in his last film Jukti, Takko ar Gappo. (1974).

In Meghe Dhaka Tara (1960), Nita’s mother is not only the nurturer of the household but also a manipulator. Finding Nita to be the only successful bread-earner for the family, she puts her weight in a way so that Nita remains the ‘man’ of the house. The father who was old and incapacitated and the elder brother Shankar who became a singer in Bombay films much later in the narrative couldn’t nourish the family. In some deft touches, Ghatak again touches the chord of the brother-sister coupledom between Shankar and Nita, a photo when they were primitive and close to nature. Nita’s mother was hopelessly hapless in a situation on which she had no control apart from clinging on to Nita, making her a victim of everyone else’s expectations and prosperity. The character, like Nita’s remains an iconic one in Bengali cinema for being an antithesis of the traditional ‘mother’ archetype in Bengali psyche and culture.

There have been quite a few other interesting mother portrayals in Bengali cinema as well. On the one hand the typical representation of the mother as the trouble-some mother-in-law in popular cinema over the several decades and on the other, the mother as the backbone of the familial structure. In the cinema of Uttam Kumar and Suchitra Sen, apart from the central hero-heroine bonding, a significant part of the narrative was devoted to the relation between the hero and a mother figure (at times aunt as well). The submission of the hero to motherly love is seen as instrumental in the acceptance of Uttam not only as the most desired man to the women but also as the most desirable son to the mothers of Bengal.

On a different plane altogether we can also find a dancer mother in Rituparno Ghosh’s debut film Unishe April (1994). This is where Ghosh questions the definition of ‘success’ in a patriarchal reference frame where the dancer’s ambition to be successful in her art forced her to be alienated with her daughter and as a result looked upon as a villain. In this derogation, she is held hostage by her own daughter as well. In Ghosh’s later film Titli (2002), the idea of the “mother”, as opposed to a desiring woman, is significantly poised where the mother almost becomes a rival of her daughter in a triangular sexual tension.

In Mrinal Sen’s urban films, the mother is the silent warrior, the workforce whom no one pays heed to but the family unmistakably revolves around her. Sen’s camera generally holds the lower middle-class Bengali family of the 70s and the 80s and the relentless struggle of the working class comes through life.

In the Indian context, land, mother and the goddess get juxtaposed and play interchangeable roles. The Bengali woman started going out to earn for the family – her father’s or her in-laws’, earlier than most of her counterparts in the other parts of the country. A big reason for this can be attributed to the influx of the migrant refugees after 1947. The liberal Bengali’s rational awakening helped him to accept the working woman besides him. Yet, it is the woman who till today has to manage her multiple roles and deck up her varied portfolios. It is she who has to pay the price – within her home or at her work place. It is she who is always expected to play the role of Durga in the everyday nuances of life. Maybe, she also believes in her avatar!

Cinemaazi thanks Amitava Nag for contributing this article which was originally published in News18 on 08 May 2016. The images used in the feature are taken from the internet and Cinemaazi archive.
566 views