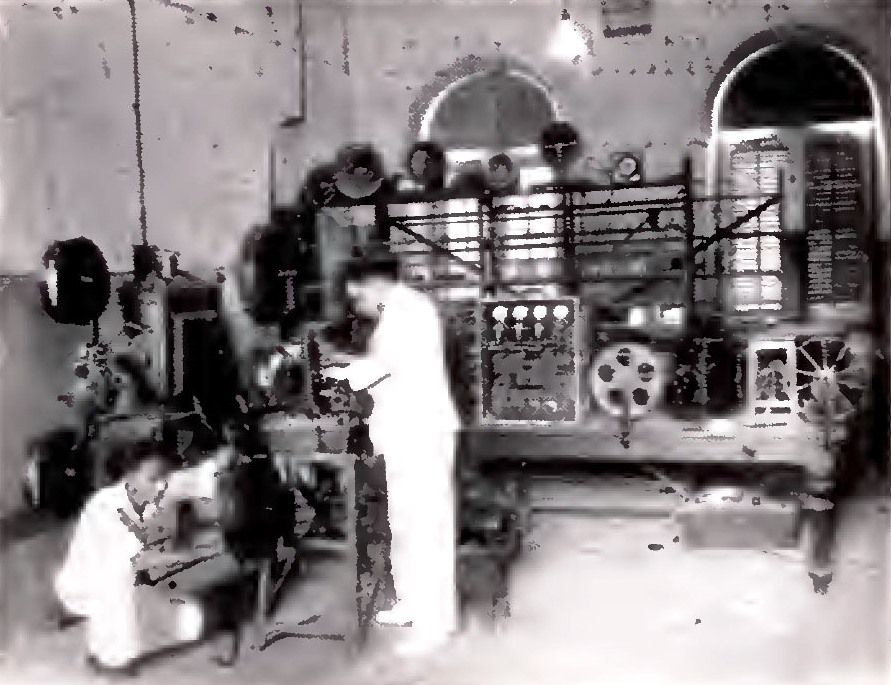 A Training Room
It is rather sad to observe that during 28 years of the progress of our film industry no adequate facilities were available to train our educated young men into useful technicians in the various departments of our film industry. With the opening up of the Abdulla Fazalbhoy Technical Institute, a new career has been opened out for our young men of to-day.

The existence of the Institute is entirely due to the generosity of the Fazalbhoy family who have financed the whole scheme to perpetuate the memory of the late Mr. Abdulla Fazalbhoy, a well-known pioneer in the Radio and Cinema trade. And to give it an academical status the Institute has been handed over to the authorities of the St. Xavier's College for proper conduct and management.

The College is thus able to help in the technical education of the country, and their course for Radio Engineers started previously proved a success and found such an unqualified acceptance in absolutely all the provinces of India and in the largest Indian States that they have now opened their Cinema Section beginning with a training course for Cinema Operators.

In the interests of public safety and fine entertainment the opinion has often been voiced that projectionists should be properly trained to meet adequately their heavy responsibilities and that the authorities should make it compulsory for each projectionist to hold a certificate of competency issued by a responsible body. The Abdulla Fazalbhoy Technical Institute starts now a training course for projectionists, giving it precedence over other courses on technical branches of the Cinema industry, which are to start next year.

An exceedingly fine and chosen professorate with foreign and Indian degrees and the College laboratories equipped with the best possible equipment are available for the students...

The present course of training for Cinema Operators is a six months' course arranged in two parts. The first part equips the student with the background of fundamental scientific knowledge while the second half gives thorough practical training for his work as a projectionist. An exceedingly fine and chosen professorate with foreign and Indian degrees and the College laboratories equipped with the best possible equipment are available for the students and the most attractive feature of all is that in the second half of the course the Institute staff will be assisted by the Engineers of the several firms dealing in different makes of projection. The service department will assist the Engineers and the lectures of these engineers will deal with different technical points of projection in which they have specialised themselves, and also, with the special features of projection of that particular manufacture. The projectionist Diploma is granted on successful termination of the course and completion of apprenticeship.

We wish the institute every success and it is our hope that before long it will also take up the other courses in film production. Interested readers can secure the prospectus on application to the Secretary, Abdulla Fazalbhoy Technical Institute, St. Xavier's College, Bombay.
***
This article is a reproduction of the original that appeared in FILMINDIA Magazine, December, 1937 (p. 47).
288 views