Twelve Rooms In The House Of My Heart : Shammi Kapoor 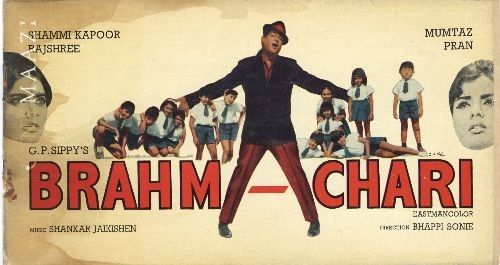 The House of my Heart has twelve rooms and each one of them is occupied by a cute little child—the twelve children of Brahmachari (1968), whom executive producer Ramesh Sippy once described as the “Angel Brigade”. Each one of us retains a part of our childhood, the part that becomes more and more precious with the growing years. As we are submerged below the waters of time, the memories of our childhood are like those oxygen tubes which enable us to breathe the fresh air of innocence. As a star I have portrayed many roles, good and bad, golden jubilee roles and roles that were not so good. I have breathed cinema because I was born into the film world and grew up with it. I have worked in scores of films and seen hundreds, if not thousands, of them.

But the day I began work on the sets of Brahmchari, my heart expanded to provide room for twelve lovable children who share the histrionic honours with me in this film, and for the first time, I became conscious of the fact that I was perhaps, even today, very much a child at heart.

I have heard a lot of talk about the heartlessness of film artists. For years, the film artists have acquired the image of a group of ruthless, heartless, money-mad exploiters of the film industry, a set of immoral people to whom everything in this world is good or bad according to whether it serves or does not serve the purpose of their own pleasure-filled, lavish existence.

If anyone has a heart, the film artists have it.

In my screen life, many women have stolen my heart from me and with great difficulty, I managed to get it back. But now these twelve children of Brahmchari have stolen it again — and perhaps for keeps. Once again I am in love — with these children. Not only because in them I see a glimpse of my own childhood, but also — God bless Them! — I see in them a number of great stars of tomorrow.

As many of you probably know, Brahmchari is the story of a young man who provides a home to twelve parentless children. The casting was quite a difficult problem. We had to choose out of nearly a thousand children. Ultimately we decided on twelve — and not one of them was given a screen test. Some of them had never faced a camera ever before in their lives. Yet, they justified our confidence and faith. They were perhaps born actors and actresses. The first day the "Angel Brigade" arrived on the sets, I knew that here were twelve little thieves, intent upon stealing scenes from me. And there is precious little any actor can do when his adult experience is matched against childish innocence.

Shammi Kapoor with the child artists in the song Chakke mein Chakka from the film Brahmachari. The popular song was voiced by Mohammad Rafi
There was Chandini, the eldest of them, a shy girl with a quiet dignity. There was Meet, the cute little one who could mimic a stammerer so delightfully. There was Balal, the boy who was afraid of water and would avoid a bath. There was handsome Ujala and the precocious Guddi. Guddi had her front two teeth missing and everyone teased her that the rats had nibbled away her teeth; we incorporated this children's tease into the film script. And of course, I cannot forget, Roshni who wore glasses, the Chinese kid Yoni and even that few days’ old baby who made a brief appearance as a"guest star" in this film.

Of course, their real names were quite different, but their film names which I have given above were specially chosen in such a manner that they did not indicate any religion or nationality. Children, I believe, have no religion higher than their innocent smiles and spontaneous frequent tears. They do no evil and need no forgiveness from God or man!

What is cinema? An art? A package of fun and entertainment? A business proposition?

There have been many answers and there are conflicting views. But I believe that a film should have a heart.

In these days, when the cities are growing bigger and bigger and the skyscrapers are jutting into the skylines, it is essential that we become conscious of this world in which men live like strangers under the same roof, and make films which emphasize the essential brotherhood, the emotional links, and common traits which bind all men, big or small, rich or poor. Brahmachari is such a one.

Among this film's unusual stars is also a 1937 model Fiat, an odd-looking but very dependable jalopy which we named the jumping Jack  We took the Jumping Jack to Baroda for outdoor shooting, but we were so solicitous about its welfare that we did not want to subject it to the stress and strain of a long self-made journey. it was carried in a truck all the way. In Baroda the children took a ride on India's only train for children. They enjoyed it. In every other film, I have played the bachelor lover. In this film, for the first time, I was saddled with the responsibility of these twelve naughty children. And, being a father, or rather playing father to these children, can be quite an experience which cannot but influence the viewpoint of an artist. Yes, sir, the house of my heart has now twelve rooms more — and these rooms shall remain occupied by these children long after Brahmchari is released and consigned. To history!

This article was originally published in Star & Style magazine's 1 July, 1967 issue. The image used in the feature is taken from Cinemaazi archive
1035 views