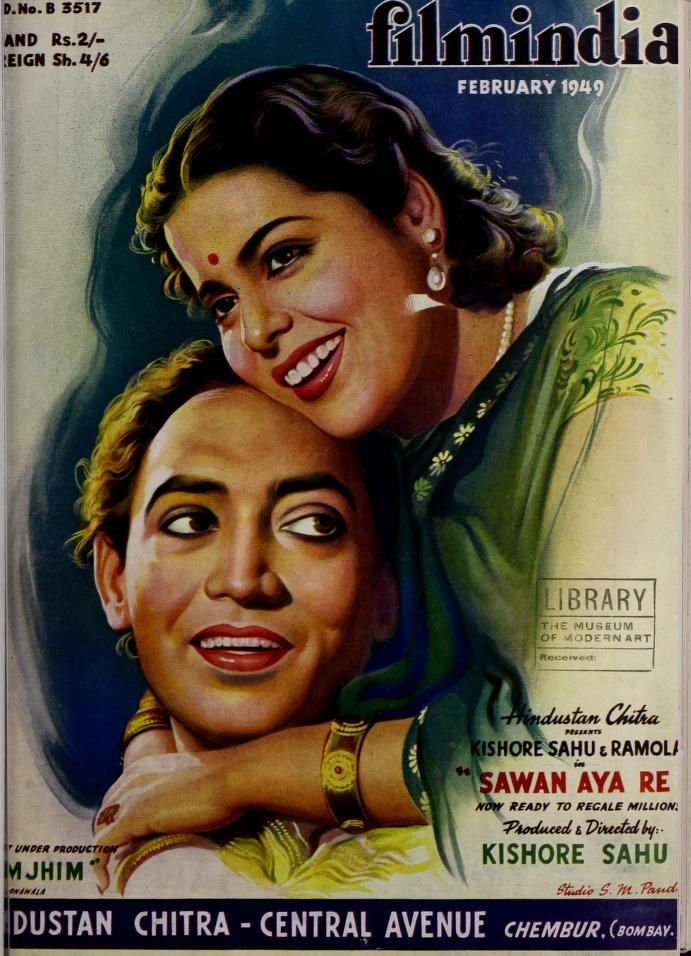 Kishore Sahu's Sawan Aya Re poster was on the cover of Film India's February 1949's issue. Film India was one of the leading English film magazines of the time.

B.K. ADARSH, the compiler of this immense volume and editor of "Trade-Guide", has very flatteringly singled me out to write this article. I have accepted his invitation with pleasure.

There is clear evidence that Indian film publicity, always miserably below foreign (especially Hollywood) standards, has over the last decade lost much of its dynamism of earlier years. One hardly sees a good, eye-catching advertisement these days and the handouts issued by public relations officers have become drier and more uninteresting than ever before. There is a visible bankruptcy of ideas and novelty in outdoor publicity, too, and altogether the publicity of an average film from start to finish has declined in quality.

The root cause of the trouble, in my opinion, is that by and large film producers do not UNDERSTAND what film publicity is or should be. Many do not engage professional, qualified publicists at all and go through a production without this important limb altogether. Those who do engage the few publicists there are (and most of these are charlatans) pay them poorly. I know a publicist who publicises as many as eighteen pictures and gets about fifty rupees a month from each production. All he does - and one can't blame him - is sit down with his typewriter once a week and reel out eighteen dry, unreadable, unpublishable write-ups, which have no reader interest in them at all. With this kind of thing going on, is there any wonder that the standard of film publicity has gone down so low?

Most of our better and well-circulating film journals are still published in the English language. One is not happy about it, of course, but there it is. To vernacular papers-even to those that are important-the average film producer does not seem to attach any importance. He finds it enough for his purposes that the news of his activities and his advertisements should keep on appearing in the three or four presently prominent English papers. He is seldom bothered to ensure that the handouts emanating from his camp are real 'human interest' stories, such as Hollywood producers issue, or that his advertisement has a good, eye-catching, correctly written headline. He is not educated enough to judge either. It is he, consequently, who is responsible for this lamentable, mushroom growth of the ill-equipped publicist, who cannot write one sentence of English-and, in many cases, even of other languages-correctly, who feels completely baffled and at sea when called upon to devise a nice caption to a space-advertisement. Being the more numerous today, it is this charlatan who holds the field of film publicity in his ruinous grip. The better more experienced and tried publicist-of the value of, say, three or four hundred rupees a month-who has a bright record of intelligent and creative publicity is consequently very much at a discount today. "My write-ups appear all the same," thanks the silly producer, but he forgets that the right kind of write-up is not being issued at all! His 50-rupees-a-month public relations man is fundamentally unable to writ five interesting lines.


And it is not as if this poverty of handouts and captions is visible only in the English language. Our 'cheap' publicist, who is in the profession because the producer, his boss, is even less educated than he, is unable to do better even in other languages. Poor sentence-construction, the wrong use or omission of articles and prepositions in captions, and the complete lack of a nice turn of phrase or the use of pleasing simile are a regular feature of all his work. Therefore, it is always dull, dry and uninteresting. I don't suppose the readers of the papers in which it appears ever bother to read it!

And one isn't complaining only about the lack of niceties of language. The whole thing is most lackadaisically done. Even if accidentally one of these publicist has tumbled to a nice caption-very likely stolen right out of a Hollywood magazine-he generally has no visualising ability, so that the overall effect of the advertisement becomes exceedingly irritating. Then again, he doesn't generally know at what frequencies and in what media he should advertise his cinemas' product. In other words, he has no idea of a regular, systematic campaign-which consists in not only space-advertising but also in the appearance at regular intervals of write-ups, articles, interviews and photographs.

I hope those producers who are unconsciously guilty of encouraging the growth of these worthless publicists and those stars who keep on of them on their pay-roll will read this articles carefully. I hope they will realise what a great disservice they are doing to the films industry. More than ever before, our films are beginning to go to foreign countries and festivals. It is essential that the publicity that accompanies them is good, apposite and attractive. It is essential that it is nicely, correctly written and it is essential that it is dynamic in its approach to the customer.

I say this with full knowledge of facts that most of our publicity is still such as will compel a foreigner to remark: "How primitive!" or "Why do they have to write it in English?"

We don't want this to continue, do we? Not with our daily-growing foreign markets, surely!

This article was written by Devendra Pratap and was originally published in Film Industry of India, compiled by B K Adarsh in 1963. The images used in the article were taken from Film India was not part of the original article.
490 views