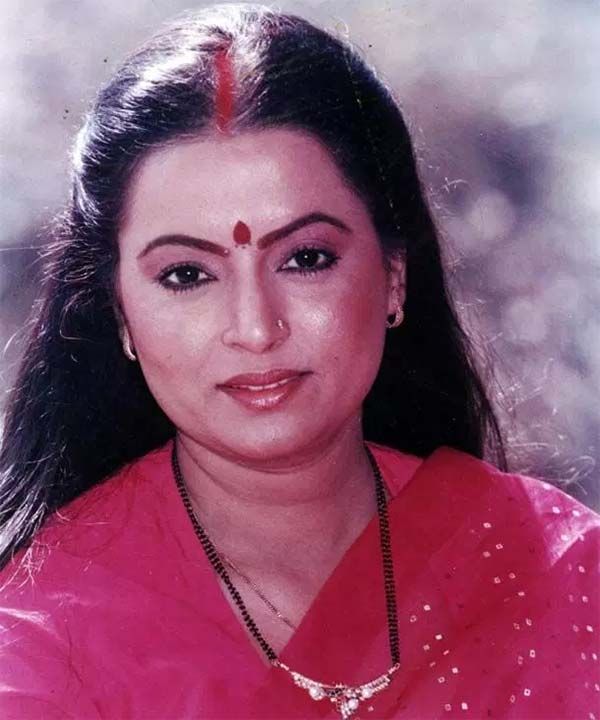 Rita Bhaduri Passes Away! This news headline which I saw on the morning of 17th July 2018 as soon as I logged into Facebook was a shock for me. What had happened to her suddenly? She was too young to die in my eyes. I couldn’t believe it initially but on contacting common friends in her circle, I found out that the sad news was indeed unfortunately true. I came to know that she had been suffering from diabetes for many years which had taken a toll on her kidneys over the years. In fact, she had been admitted to the ICU during her last few days.

I met Rita ji in 2003-04 on the sets of Doordarshan’s serial Shikwa through our family friend Alka Ashlesha ji. Alka ji was also playing an important role in that serial. The producer-director Rakesh Chaudhary was the maker of the series and the shooting used to take place at playback singer Hemlata’s bungalow in Andheri (East)’s Millat Nagar Area. It is important to note that the founder member and English translator of Beete Hue Din, Akshar Apoorva, is the daughter of Alka Ashlesha ji.

It is a common misconception that Rita Bhaduri is the sister of Jaya Bhaduri which is totally wrong. The truth is that both are not related to each other. In fact, Jaya has a sister named Rita who is a different person married to popular character artist Rajeev Verma whereas (late) actress Rita Bhaduri remained unmarried all her life. A horrifying example of misinformation on the internet is that her Wikipedia page mentions the names of her sons as Shiladitya Verma and Tathagat Verma who are actually the sons of Jaya’s sister Rita and her husband Rajeev Verma.
Rita ji was among those artists whom I had interviewed 14-15 years back for my column Kya Bhooloon Kya Yaad Karoon for the weekly Sahara Samay. To maintain the authenticity of the blog Beete Hue Din, before posting that time interviews I try to update the information with the concerned artists or their family members. Among these I try to focus more on retired and elderly artists. As a result, interviews of relatively younger and still active artists like Rita ji are kept in waiting.

I was an upcoming writer at that time and due to my inexperience then, I did not ask Rita ji about some important details like date and place of birth, family etc. In fact this was one of the reasons that shocked me when I saw the news of her demise. I did not know the details of her family members and didn’t know whom to approach for the updates. On the other hand, misinformation was rampant on the internet. According to her, she was 7 years old in 1957, when they shifted to Mumbai. That means she should have been born in 1950 or 51. However, most of the websites including Wikipedia were claiming her date of birth to be 4th November 1955. There was some doubt about her birthplace as well. According to whatever she told me during the interview, she should have been born in Indore but Wikipedia claimed it to be Lucknow. At this juncture Alka Ashlesha ji suggested that I talk to Rita ji’s sister Ruma Bhaduri.  Ruma ji was also an actress who had acted in a couple of serials.
Ruma ji’s phone number was neither with Alka ji nor in the Film Directory. In this situation, once again, I contacted the Cine and TV Artist Association – CINTAA. Ms. Shweta Aayre, who works in the CINTAA office informed me that as per their records, Rita Bhaduri was born on 1st November 1951. She also gave me Ruma Bhaduri’s number though Shweta did point out that a cross was marked against that number. When enquired with Shri Anil Gaikwad, a veteran of over 24 years in the CINTAA office about this cross mark, he informed me that Ruma ji passed away many years back, thus the mark. It appeared as if all doors for getting updates had closed when suddenly I was reminded of Shubhuda, Shubhankar Ghosh. The director of the movie Woh Chokri (1994), which won three National Awards. The son of famous screenplay writer and Bengali author (Late) Shri Nabendu Ghosh, he is popularly called Shubhu and as our big brother or Dada, he is affectionately called Shubhuda.

He gave me not only the full details of Rita ji’s family but also the phone numbers of her elder sister and brother. Rita ji’s eldest sister is named Raka Mukherjee. Her husband Barun Mukherjee is a well-known camera man who has the movies like Chakra (1981), Gehrayee (1981), Baghban (2003) and Baabul (2006) to his credit.

Ruma Sengupta (nee Bhaduri), the middle sister, had worked with Times of India and the magazine Dharmyug as sub editor for a long time, apart from being an actress. She had worked as a child artist for the film Nanhi Kaliyan (1971). Nearly three decades later, she was seen in the serial Kahin Kisi Roz. She had also played the role of the Dadi in the movie Na Ghar Ke Na Ghaat Ke which released in 2010. Her husband Shankar Sengupta used to work in an Ad Agency. After her sad demise on12 July 2013, he shifted to Kolkata and now stays there.
Their brother Randev Bhaduri who was younger to Ruma ji is a well-known camera man in Gujarati films and stays in Vadodara. Rita Bhaduri was the youngest among them. Randev Bhaduri’s wife i.e. Rita ji’s Bhabhi Smt Tandra Bhaduri told me that Rita ji was born on 11th January 1950, in Indore. Thus, the date of birth on Wikipedia as well as in CINTAA records was incorrect. She also told me that her mother-in-law actress Chandrima Bhaduri passed away on 6 June 1997, while Rita ji’s father i.e. her father-in-law had passed away in 1980.

The internet appeared to be the only source for collecting the details of Rita Bhaduri’s Gujarati movies. Internet Movie Database or IMDB did mention a few but the truth of internet was already in front of me. It was not easy for me to write their names in Hindi/Devanagari with the correct Gujarati pronunciation. In this situation, famous Gujarati writer-translator-blogger Shri Biren Kothari who is based in Vadodara came forward. He sorted out all the doubts about her Gujarati movies during a long telephone conversation.

Even after the interview, I met Rita ji 4-5 times during the annual meetings of CINTAA and she greeted me very warmly on each occasion. As my writing endeavors increased, my social activities and interaction with other artists gradually reduced. And then I suddenly got this news! It took me nearly 15 days to update this 15 year old interview. Our blog Beete Hue Din is extremely grateful to Ms Alka Ashlesha, Ms Shweta Aayre and Anil Gaikwad of CINTAA office, director Shubhandar Ghosh (Shubhuda), Ms Tandra Bhaduri and Gujarati writer Biren Kothari ji for all their help. It would not be an exaggeration to say that Shri Anil Gaikwad has been my strength since the time I started writing my column Kya Bhooloon Kya Yaad Karoon for Sahara Samay. Whenever needed, he not only used to extract information regarding forgotten elderly artists like their names, phone numbers and addresses from very old registers kept in CINTAAs almirahs but also used to suggest the names of artists to interview. This helpful approach of his continues to this day and thanks is a very small word to express my gratitude towards him.