In a residential area of a city, a donkey is killed by some residents. The donkey's orphaned foal takes shelter at Professor Narayanaswamy's (M.B. Sreenivasan) house. The professor out of pity decides to bring it up. He calls the foal 'Chinnan'. The next day, his neighbors start criticizing his act. When this news reaches his students at the college, they mock him. The college principal asks him to sort this out as it is affecting the college atmosphere. The professor asks for a few days leave to go to the village and leave Chinnan. When he realizes this chore may take longer, he resigns his job and leaves for his village along with Chinnan.

At the village, his Brahmin parents, staying in the Brahmin ghetto are surprised with his idea to care for a foal. However, the professor convinces his father and a mute girl Uma (Swathy) working in their house is assigned to take care of it. The professor returns to the city for his work. Other residents of the ghetto start talking ill about bringing up a foal in the traditional Brahmin ghetto. A few mischievous children in the village use Chinnan for their naughty activities, creating an impression that the foal has acted on its own and created these disturbances.

When the professor returns to the village after some months, his father narrates the incidents involving Chinnan and how the neighbors are constantly complaining. The professor's brother Venkat (Raman) is transferred to the village and arrives with his wife. His wife, who has not conceived, gets upset about the presence of the foal at home. In order to ensure peace at home, the professor takes Chinnan away and gives it to Uma, paying her to take care of it and return to the city.

While taking Chinnan to the fields, Uma falls in love with a worker. One day, he convinces and has a physical relationship with her. Soon, she becomes pregnant. The worker vanishes and she is left to manage on her own. The foal has now grown into a donkey. After some months, the professor returns to the village and is shocked to see that Uma is pregnant. She informs him that the temple priest was injured due to Chinnan; hence the villagers, headed by Srinivasa Iyer (Veeraraghavan), sent the donkey to a washerman. The professor goes to see Chinnan and then leaves for the city.

When Uma delivers a stillborn baby, her mother takes it and leaves it at the temple complex to avoid Uma being identified as the baby's unwed mother. The priest finds the stillborn baby and calls the other villagers, alleging that this has spoiled the sanctity of the temple. Srinivasa Iyer suspects that the baby might be Uma's, and calls her mother for confirmation. Uma's mother gets scared and confesses that it was indeed Uma's baby, but was brought to the temple by the donkey. Srinivasa Iyer and the villagers get infuriated with the donkey and advise their farmworkers to find and kill it. The workers find it, stone and kill it. The villagers then bury the donkey outside the village.

The village astrologer (Kudukudupukaran) informs that for the sin of killing the donkey, bad omens will haunt the village. Srinivasa Iyer overhears this, feels guilty, and starts hallucinating, seeing the dead donkey near him. He believes in his hallucination and informs everyone that the donkey is reborn and he has seen it. Based on Srinivasa Iyer's claims, all the villagers assemble to see the donkey in the mountain and start believing in his words.

Soon, some miracles start happening in the village. Srinivasa Iyer's long lost son returns one day; a paralyzed lady starts walking; Venkat's wife, who did not conceive for years, becomes pregnant. On returning to the village, the professor comes to know about these happenings. Soon, people start believing that the dead donkey has brought about all these miracles and Srinivasa Iyer suggests the need to construct a temple for the donkey and everyone agrees.

The professor looks for Uma and finds her. They both search for the skeleton of Chinnan. By then, the villagers come, pick up the skeleton and give a ritual funeral to the donkey by burning its skeleton. The skeleton burns and unfortunately the fire spreads and engulfs the entire village. Only the professor and Uma survive at the end. 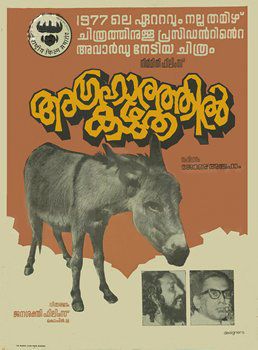