Mahendra Bhoopathi (D. Balasubramaniam) and Marthandam (Nagendra  Rao) are rival kings. When Bhoopathi’s wife gives birth to conjoined twins, Dr.  Nanjappa (G. Pattu) separates them skillfully. Though they are separated in the body, their feelings cannot be separated. Whatever the feelings one experiences,  the same are felt with the same intensity by the other. Bhoopathi invites all the neighbouring kings except Marthandam for the twins’ naming ceremony.  However, Marthandam attends the function and in a surprise attack, his men set fire to Bhoopathi’s fort and fight with his army. Marthandam kills  Bhoopathi cunningly in the fight. On learning this, his wife also dies.

The children become orphans. Without any one’s knowledge, Dr. Nanjappa takes the babies to the safety of his house through the tunnel from the palace.  Marthandam thinks the entire Bhoopathi clan has perished. Marudhu  ("Stunt" Somu), one of Bhoopathi’s loyal assistants, reaches Dr.  Nanjappan’s house and learns that the twins have survived. To reduce the risk to the children’s lives, Dr. Nanjappa gives one infant to his sister; the other is brought up by Marudhu in a forest.  The elder, Vijayasingan or Vijayan (M.K. Radha), grows up in the city with Dr. Nanjappa’s sister, while the younger,  Vikraman (M.K. Radha again), is brought up by Marudhu. 20  years roll by...  In a cultural program, Vijayan meets beautiful Kanchana  (P. Bhanumathi) and saves her from the old yet lust-filled Marthandam and his men. Both fall in love in due course. When the boys reach the age of 21, Dr. Nanjappa introduces them to each other and reveals their history.

The twins swear to avenge the dastardly killing of their father and restore the glory of their kingdom. They decide to live together in the forest to prepare for their attack on Marthandam. Both commence attacking Marthandam’s kingdom from different directions. Marthandam and his assistant Jambu learn that they are being attacked by Bhoopathi’s clan members and search for them.  Marthandam meets Kanchana’s father and demands her hand in marriage. When her father refuses, Marthandam arrests him. Kanchana sends an urgent message to Vijayan to rescue her. He comes to her house. Aided by a servant,  Kanchana escapes with Vijayan and they reach the forest house.  In the forest, problems crop up between the brothers as  Vikraman too falls in love with Kanchana. Being the younger of the conjoined twins, Vikraman suffers from aches and frustrating feelings whenever Vijayan and Kanchana are intimate.

Vikraman is deeply in love with Kanchana, and despite repeated reminders from Vijayan on the task before them to defeat Marthandam, Vikraman’s heart longs for Kanchana. The differences between the brothers increase and they get into a physical fight. Kanchana gets upset seeing them fight for her; not wanting to be the cause of their split and to enable them to reach their avowed objective without further distraction, Kanchana leaves  Vijayan after writing a letter to him. Vijayan reads the letter,  gets upset, and seeks Vikraman’s help to trace Kanchana,  but he refuses. Vijayan goes in search of Kanchana, who has gone to a dance program to hide from the brothers but has fallen into the clutches of Marthandam, who has kidnapped her. She does not reveal any information about the brothers to him.

Suspecting Dr. Nanjappa’s involvement in saving the twins,  Marthandam asks him about the brothers’ whereabouts,  but he reveals nothing. After Marthandam leaves, the doctor sends a message (by pigeon) to the brothers that  Marthandam is on the lookout for them. However, the pigeon is caught by Marthandam, who reads the message and gets confirmation that the sons of his enemy are alive.  He changes the message to a new message that Kanchana is in Marthandam’s custody. Vijayan reaches Dr. Nanjappa’s place and realizes the message was not sent by him. He concludes that Marthandam has taken Kanchana away.  Despite her refusal and strong objections, Marthandam fixes his marriage with Kanchana. Vijayan goes to  Marthandam’s palace as a diamond merchant and gives a message to Kanchana that he has come to rescue her.  Marthandam’s concubine, who was hoping to marry him,  is upset with his decision to marry Kanchana. She comes forward and helps Kanchana to escape with Vijayan.

While they are escaping, Marthandam captures them and dumps them in a room. He tortures Vijayan to find about his brother. Dr. Nanjappa is called by Marthandam to treat  Vijayan. Instead, Dr. Nanjappa sedates him and informs  Marthandam that Vijayan is dead. Marthandam believes this and becomes happy. He looks for the other brother to kill and eliminate his enemies.  Vikraman, who experienced the torture Vijayan went through, first thinks it is better that Vijayan dies so that he will stop experiencing the same feelings. But he realizes his mistake through Marudhu and comes to take revenge on Marthandam.

The songs of the film were very popular. ‘Laddu  Laddu Mithai Venuma…’ sung by P. Bhanumathi had Songs in five languages (Hindi, Tamil, Telugu,  Malayalam, and Kannada), demonstrated her multi-lingual talents, and was the highlight of the film. In addition, the songs, ‘Manamohaname  Vana Vasame…’, ‘Maanum Mayilum Aadum  Solai…’, ‘Aaduvenae geetham Paaduvenae…’, and  ‘Odakkara...’ were very popular. 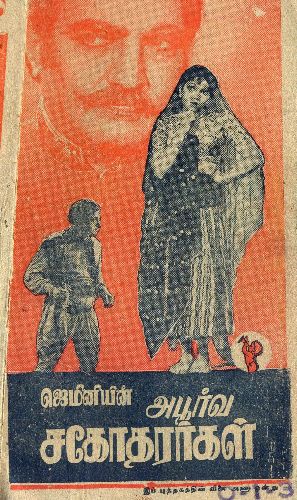