Why one becomes rebel? Why one goes against the laws of the Society? Because one is deprived of his fundamental rights! rights to live, rights to love...

Raja (Sanjay Dutt) is the one from whom every right has been taken away. His innocence, dreams, future, pease and his will has been snatched away, even his love Rani (ManishaKoirala) has been taken away by the cruel hands of few opportunists. An innocent life seeking Raja has been given a gun by his so called well wisherVikram (AdityaPancholi) to avenge but Raja starts loving by the gun and willyVikram starts using that gun and Raja for his benefit.

Enters a child Surya (Master Rohan) in Raja's life and Raja starts seeing his childhood, his dreams Surya's eyes. Surya idolizes Raja and his life style, much to the annoyance of his father Professor V.S. Pandey (ShivajiSatam) who dares Raja to keep away from his son. Pandey can foresee his son's future if Raja's influence on Surya continues.

Surya becomes a handsome young boy (Inder Kumar) and on achieving the age, falls in love with Kiran (Tina) head over heels without knowing that Kiran is the sister of an overly possessive brother Vikram.

As usual Surya confides in Raja, who helps Surya every way possible to win his love until one day Raja comes to know that Surya has fallen in love with none other than Vikram's sister Kiran. Raja warns Surya of the consequences and asks him to keep from Kiran but by now Surya has gone beyond reasoning. He is in love and ready to take anybody, no matter how mighty one could be.

Vikram comes to know about Surya's misadventure and calls his trusted man, Raja to finish Surya. Raja pleads Surya's case but fails, requests Vikram to let Surya go, but fails. Threatens Vikram not to touch Surya but fails, then dares Vikram, old friends become sworn enemies. Vikram swears to destroy love, while Raja swears to protect love, Raja becomes a rebel with a cause. How Raja gives his life to give Surya and Kiran their lives - This is what "BAGHI" is all about. 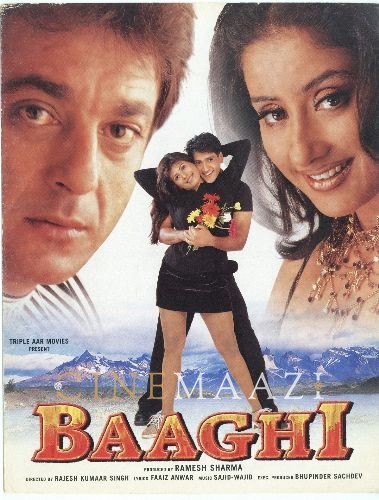