Gopala Iyer (Bharathan) is a jobless widower. His young daughter Sarasa (K.R.  Chellam) studies in school. He borrows money which he is unable to repay.  Mahalinga Sastri, who lent him the money, comes with a court order to confiscate his properties for not repaying the loan. At the same time, Sarasa returns from school (having been sent out for not paying her fees) and gets shocked to see the happenings at her house. Sarasa, along with her father, plead and resist the court employee from taking an idol which is worshipped by them daily. When the court employee refuses and forcefully takes it, Gopala Iyer gets angry and beats him.  To save her father, Sarasa rushes to meet the Sub Collector Balachandra (K.B.  Vatsal), who is a close friend of her father. She is stopped by his guard Munisamy  (C.V.V. Panthulu). However, she avoids him and enters Balachandra’s room. At that moment, Balachandra was romancing a lady doctor in his chamber. He gets furious for the intrusion and throws Sarasa out of the room. He also beats and dismisses Munisamy from his job for allowing her to enter his room. Sarasa falls into another room where Saroja (Baby Saroja), daughter of Balachandra,  his widowed sister Janaki (Seethalakshmi), and her daughter Kamala are sitting.  Janaki, Kamala, and Saroja calm Sarasa and protect her. Balachandra gets angrier on seeing their love for Sarasa and throws Janaki and Kamala out of his home.  Sarasa tries to meet Munisamy who lost his job due to her. She finds that his wife is in an advanced stage of pregnancy and he does not have money to call the doctor. Sarasa rushes and meets a doctor, pilfers his money without his knowledge, and using it, brings him to treat Munisamy’s wife. She then leaves  Munisamy and returns to her home. There she finds the house locked with a  note from her father stating that he has been arrested for beating the court employee and his case will come up in court, the next day.

Sarasa rushes to the police station and pleads with the Sub-inspector to meet her father but he refuses. She thinks that if she attacks a government official, she will also be arrested, then she can meet her father and be with him. So she bites the hand of the SI.

However, instead of arresting her, he whips her severely and throws her out of the station.  With no one coming to her rescue, she goes to a temple where she meets Janaki and  Kamala and spends the night with them. The next day, they come to the court for hearing the case. Sarasa cries on seeing her father, who gets worried about leaving his daughter alone. Gopala Iyer is convicted and jailed.  Janaki, Kamala, and Sarasa take refuge in the house of their servant Munisamy. They find that his wife is dead, he has fallen sick and his children are starving. Sarasa is unable to bear the suffering of Munisamy and his children. She goes to the Sub Collector’s house discreetly and tries to bring food and groceries from there. Saroja suddenly appears there, stunning Sarasa. Sarasa explains the reason for her actions and Saroja understands, feels pity for Munisamy’s family, and gives her more items to take away. Munisamy dies and  Janaki takes care of his children also.  Janaki, who is a Brahmin widow, staying at Munisamy’s house with her daughter and Sarasa and bringing up his children, causes outrage in the conservative Brahmin society. Munisamy’s house is torched by a mob of Brahmins led by Mahalinga Sastri. Sarasa, who goes out of the way to help everyone, gets help from Saroja, and child Saroja changes everyone’s thinking with her arguments at the end.

Balayogini is considered to be the first South Indian film that focused on the life of a child. Made in Tamil and later in Telugu, it was one of the earliest Tamil films to be set in a contemporary social setting and to advocate reformist social policies.

After the success of this film, Baby Saroja was called the “Shirley Temple of India”. Such was the popularity she gained! 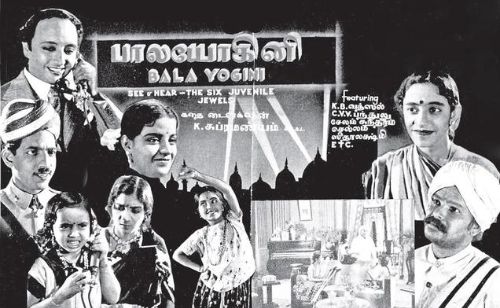