Blind, impulsive passion is the root of much of the misery in life. Perhaps the human heart may later repent its fall, but repentance sometimes comes too late, and cannot always undo the damage already wrought. The film "CHHOTI DUNIYA" is based on this theme, and it carries its message poignantly to the depths of the soul.

This is the story of Jyotin and Kamini who are, as the film opens, working at stage stars. Their constant proximity to each other, necessitated by their work, teaches them to love one another. However Kamini has another admirer, Suresh, the proprietor of the theatre, who is also Jyotin's best friend. Suresh is at first unaware that he is Jyotin's rival; but when he learns the truth, he sacrifices his own love for his friend, and rejoices with the bridal pair.

As time goes by, Kamini becomes the mother of a son, and leaves the stage to devote her time to the rearing of her child. Jyotin, on the other hand, throws himself even more strenuously into his work to enable him to bestow all the good things of this world on his beloved wife and son.

But disaster is soon to knock at the door of this happy little family. A guest comes to their home with an introduction from Jyotin's uncle, and is invited to stay with them. Kishore, as he is called, repays his host's generosity by making love to Kamini in her husband's absence. Eventually he entices her to elope with him, and, taking her little son, they quit the house together.

When Jyotin learns what has happened, he is stunned, and almost loses his mind. In this state he meets with an accident, and narrowly escapes death. During his convalescence he is tended by Rajni, who has for years borne a silent love for him. Yet he cannot regain his former zest for life and for his career. As the bitter months pass, his friend Suresh is always by his side, encouraging and consoling him, but to no avail.

Eventually Suresh succeeds in winning back Jyotin to his stage work, and once more he is a star behind the foot-lights, this time with Rajni as his heroine. Then as the memories of old love fade, his attachment to Rajni grows, and finally he decides to marry her who had solaced him so faithfully in his misery.
Meanwhile all is not well with Kamini and Kishore. Kamini bears a mother's infinite love for her son, and the child is the source of constant quarrels between her and Kishore. Eventually Kishore shows himself in his true colours, and deserts her while her son lies in a dangerously ill condition. Then alone the impact of the grave mistake she has committed hits Kamini. She is utterly distressed by this realisation and does not know where to turn at this critical moment. The idea grows in her mind that she should return to her husband, and she pens him a word of his sons' illness.

This telegram is handed to Jyotin at the very moment the marriage ceremoney binding him and Rajni together is taking place.

Consider a father's love for his beloved son tearing at his heart! Reflect on the duty and affection he owed the faithful, loving heart of Rajni! How should Jyotin decide? What of the woman forsaken at the very brink of marriage? Should not a repentant wife be received into her husband's arms once more?

See "CHHOTI DUNIYA" to solve these heart-seahring problems, and be thrilled and utterly uplifted by its dramatic climax and end. 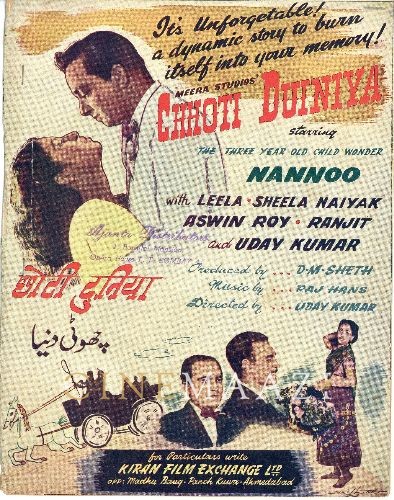