Haridas (MKT) is the son of rich and religious parents. Haridas or Hari is married to Lakshmi (Vasantha Kokilam). Though Haridas pretends to be a doting husband, he is a lustful womanizer once he steps out of the house. Lakshmi does not respect his parents and constantly complains about them and Hari also does not control her. His friend Kannan introduces Hari to a beautiful courtesan and dancer Rambha (T.R. Rajakumari). Hari falls for her and wishes to be with her always.

On the advice of Kannan, Hari sends his parents to a nearby temple and convinces his wife to bring Rambha to his home for a dance performance for a celebration with his friends. Rambha arrives and Hari enjoys her company at home. Lakshmi, who remains inside the home, is shocked when she comes to know from Rambha’s associate Madhavidas that Rambha is actually a prostitute.  Lakshmi beats everyone assembled there and throws them out. She also beats  Rambha, who fights back, stating that she has been invited there and it is not her fault. Lakshmi throws Rambha also out of the home.

Feeling insulted, Rambha decides to take revenge. She sends some goons to torture Lakshmi, who is captured, tied to a tree, and about to be tortured. Hari’s parents arrive and save her with the help of local villagers.  However, Rambha instructs the goons to twist the story,  alleging that it was Hari’s parents who asked them to torture Lakshmi to teach her a lesson for not treating them well. Hari reaches home by then, believes the goons,  and reprimands his parents and Lakshmi. His parents feel sad and leave home.  Hari now becomes a master of his home and lives on his own terms. He starts visiting  Rambha at her home in the pretext of going on business trips. Soon, he openly starts frequenting Rambha’s house.  Hari gets addicted to  Rambha’s beauty and starts dancing to her tunes. She convinces him to drink and then gamble. He starts living most of the time at Rambha’s place and loses all his wealth in drinking and gambling, blindly trusting Rambha. When  Hari is left with only his house, Rambha takes Kannan’s help and gets Hari to sign the house documents in her favor.

When the Village Officer (VO) Jayabalan refuses to accept it as a valid document as it was signed when Hari was drunk, Rambha uses her tact and beauty to make the VO  accept it.  Rambha reaches Hari’s house and takes revenge on  Lakshmi by throwing her out of the home with Hari. Penniless, Hari is thrown on the streets with his wife.  Having lost everything, he leaves the town with his wife  and they stay in a jungle. One night in the jungle, he sees three beautiful women (Ganga, Yamuna and Saraswathi)  getting blessings from a sage. When he approaches them,  they reveal their real status as the three sacred rivers and tell him that they regularly visit this sage to get rid of their sins. Hari does not believe this story, teases them, and goes to meet the sage who is in deep meditation (thapas). Later,  the sage notices his arrival and welcomes him.

However, Hari, who habitually disbelieves and denigrates sages, accuses the sage of enjoying life with the three women. The sage cautions him about his sins and demonstrates how  Hari’s sins change even the colour of the rivers. Hari gets angry with the sage; instead of accepting his mistakes, he accuses the sage of having a good time in the forest and tries to kick him. The sage gets angry and Hari loses both his legs instantly. The three women (rivers) advise him to pray to the sage to get his legs back. When Hari pleads, the sage advises him that his only penance and repentance will be serving his parents, so he should show how much he cares for them.  Hari realizes his grave mistake of ignoring his parents and starts searching for them, crawling (legless) from place to place, singing during his search. He faces several difficulties but pursues his journey and finally sees them from a hilltop.  When he is unable to get their attention, he jumps off so that he can meet them at least in his death. However, the sage rescues him and helps him meet his parents. Relieved of the curse, he gets his legs back.  Hari realizes his mistakes in life and commences a new life by praying to God and serving his parents. Meanwhile,  Madhavidas complains to the king about Rambha and  Kannan cheating Hari. The king orders their arrest and allows Rambha to live a normal life instead of the life of a  daasi (courtesan). Lakshmi tries to convince Hari to return to a normal life but Hari refuses and continues serving his parents. Agitated, Lakshmi goes to her parents’ place but is thrown out by her father, who says that for a wife,  her husband is the real God. Lakshmi realizes her mistake,  comes back, and commences serving Hari’s parents.  Rambha, realizing her mistakes, becomes a religious person.  Hari donates all his wealth to the poor through Madhavidas and leads a simple life in the jungle with his parents and  Lakshmi. While Hari is busy serving his parents, Lord  Krishna appears and calls Hari to meet him. But Hari refuses to come out till he has completed serving his sleeping parents. Pleased with his devotion to parents more than to God, the Lord wakes them up and everyone gets his darshan. Lord Krishna declares that Hari is an example of respecting parents more than anyone else in life, which is the ultimate devotion to God.

The film holds the record of being the first film to run continuously for 110 weeks at a single theatre (Broadway)  at Madras. No other film in Tamil could break this record till 2005. Chandramukhi (2005) starring Rajinikanth broke the record by running for more than 880 days at Shanthi 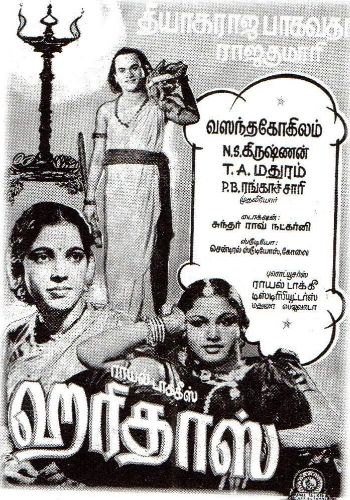