Kamali (Devayani), who lives with her sister Mallika (Monisha) and brother-in-law Shekhar (Rajiv) in Ooty, is looking for a job. She keeps coming to Chennai in search of a job and stays with her friend Jency (Indu) in a women's hostel. After one such visit, on her way back to Ooty, just when the train starts, a thief grabs her bag containing her certificates and ticket and flees. She reaches home with help from a fellow passenger and gets depressed, feeling she is always a loser in life. The thief takes the money from her bag and throws the bag into a stationary train. Surya (Ajith), who works in Jaipur, is in Chennai on a business visit and returning by train to Jaipur. Seeing a handbag on the top berth, he assumes it was lost by someone. On checking the contents, he finds it belongs to Kamali from Ooty (from her certificates and documents). He couriers them to her.

Kamali is pleasantly surprised to receive the documents she had lost. She writes to Surya, expressing her gratitude and Surya writes back. Slowly, their writing becomes personal and they start liking each other based on what they perceive of each other from the letters. Their relationship grows through letters and phone calls. They also decide that while all love stories begin through eyes and end in hearts, their love story should begin in heart and end in eyes... They resolve to nurture their love without seeing each other and also decide that they would meet only when they decide to marry. Kamali sends Surya a sweater with a lotus motif (symbolizing her name Kamali), which he preserves. Surya faces difficulty with the workers at the workplace at Jaipur and decides to resign. However, his boss advises him to opt for a transfer to Chennai and work in his sister's concern there, which Surya accepts. Meanwhile, Kamali too travels to Chennai to intensify her job search. Both Surya and Kamali meet at the Chennai railway station.

His accidental bumping into her at the station is misunderstood by Kamali as eve-teasing and she hates him whenever she sees him after that.

Though something attracts them to each other, they keep away from each other due to this incident. Kamali is not able to get a job and decides to return to Ooty. Meanwhile, Surya's new boss Neha (Heera) falls in love with him and proposes. Surya, unable to handle Neha's obsessive love, resigns from his job. A postal strike during this period leads to both Surya and Kamali being unable to correspond with each other. This absence of communication makes them despair. Surya stays with an auto driver Mani ('Thalaivasal' Vijay). When he is not able to get a job, Surya drives an auto for a living. Kamali returns to Ooty; from the letter, Surya sent from Jaipur (which finally reaches her after the strike), she learns that Surya is in Chennai. Meanwhile, her brother-in-law Shekhar (Rajeev), who treats her like his daughter, decides to get her married to a big real estate owner Shiva (Raja) so that she settles down. However, Kamali is disturbed about not being in touch with Surya and says she cannot accept the proposal. She meets Shiva and explains her situation. She says she would go to Chennai and search Surya one last time before making a decision about the marriage proposal, for which Shiva agrees. He states that if she is unable to locate Surya, she must marry him.

Kamali goes to Chennai immediately but her friend Jency is out of the station. Hence Kamali is not able to stay in the hostel. In heavy rain, she gets into Surya's auto and starts searching for Surya by going to his office. She meets Neha, who tells about her one-sided love, Surya's deep love for

Kamali and resignation. She then goes to meet Surya's colleague (Karan), but he also does not have Surya's current address. When a speeding vehicle splashes muddy water on her, she gets drenched. Surya offers to take her to his home to enable her to change her dress. She comes reluctantly, changes, and proceeds to the hostel in the same auto. Surya also changes into the sweater gifted by Kamali and wears a shirt over it. Learning that Jency has not returned to the hostel and as she cannot stay anywhere else alone, she decides to return to Ooty.

Surya takes her to the station, organizes her ticket, and helps her to get a berth. Meanwhile, Jency comes back, learns about Kamali's visit, and rushes to the railway station. When the train is about to leave, Surya's shirt gets spoiled and he removes it, thus revealing the sweater and lotus motif on it. The train leaves with the sad Kamali inside;

when it crosses Surya, she notices the sweater and gets pleasantly shocked. She starts shouting his name and when he turns, it is confirmed that he is her Surya. She gets out of the running train and hugs him. Surya is also delighted to finally meet his Kamali. The lovers unite though they have not met earlier; Jency becomes happy seeing their love succeed. 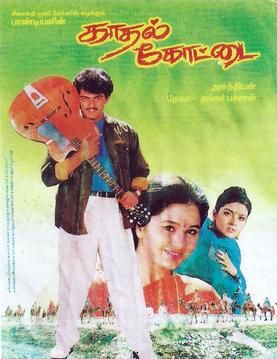