Kamyabi is the story of a young East Indian residing in Lahore who leaves his home for Canada in pursuit of big fortune. He leaves behind his infant son under the care of his old parents.

The child grows under the influence of his grand parents and is very proud of his East Indian heritage. He however misses the love and care of his father and pines to meet him. Since the father could not make a trip back home the son decide to visit him in Canada.

On reaching Toronto (Canada), he is met by a friend of his father who takes him to his father's place. The father had not seen his son for the last so many years and fails to recognise him. After proper identification, he allows the boy to stay with him.

The father contrary to his heritage and culture, is leading a very colourful and romantic life and considers the presence of his son a big handicap and nuisance.

Since he is scared that the son might reveal the whole thing to his grandparents, he takes a promise from his son to keep strict secrecy of his movements. The boy gives the promise on the condition that his movements should also be kept a secret and he can also lead his own life. They enter into a pact.

After a few interesting incidents, the boy happens to meet a charming young girl who is the dream girl of his father. The girl does not respond to the amorous ways of the hero since she finds him to be a great flirt and does not approve of his anti-patriotic feelings. Through the little boy they do meet but to no avail.

There are a few hilarious situations between the son and the father and the father plans to send the boy back home but does not succeed in his attempts.

Meanwhile the heroine makes a trip back home and comes to know the pitiable condition of the hero's old parents who are living in abject poverty.

In Canada, the hero is having all the fun of drinking squandering money on girls and parties etc. He advocates the so-called good life of the West and runs down his own culture and traditions. In one of the parties, the little boy takes a few drinks and gets drunk. The father on finding out the same hits him hard. The boy gets hysteric and goes into a state of shock. The doctors blame the father and show their inability to cure him.

The boy on getting a taped video message from his grand parents, recovers from his illness and pines to go back. The father realises his mistakes and appeals to the heroine to forgive him the past. He promises to be a good citizen of his motherland and serve his country.

They all go back home and are united to the old parents.

(From the offcial press booklet) 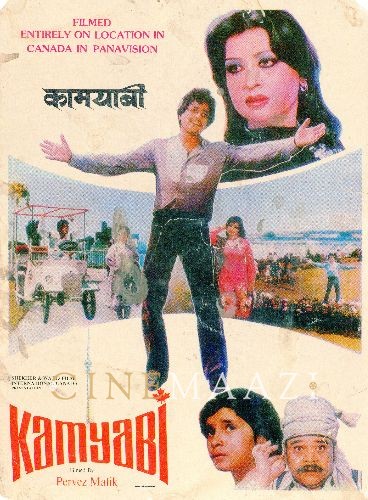