Karmegam dies leaving his elder and young son Muthiah with the responsibility to take care of his three young brothers, his aunt, and her daughter. Muthiah with the help of his Lawyer uncle (D. Balasubramaniam) starts a textile business and by hard work forms a company and runs it well. He marries his aunt’s daughter Nalina who dies during delivery, leaving a son.

After a few months, on the insistence of his aunt and uncle, Muthiah marries Santha (Pandari Bai) to take care of the child. Santha brings her young widowed sister Latha (Mainavathi) to live with them. Muthiah’s first young brother Ramaiah or Ramu (M.K. Mustafa) is a lawyer, the second brother Rajaiah or  Raju (S.S. Rajendran) is studying to become a doctor and the last brother Chinnaiah (V.R. Rajagopal) stays with him. Muthiah’s son grows as a young boy Kanmani.  Muthiah’s uncle has a son Jeeva (T.R. Natarajan) and daughter Thara (M.N. Rajam).  He is keen to get Thara married to Ramaiah.

Not knowing this, Muthiah agrees to get  Ramaiah married to Mangalam (C.R. Vijayakumari) daughter of Sokkesan, working in his office. Realizing his uncle’s plan, Muthiah agrees to marry his brother with Thara and decides to marry his second brother Raju to Mangalam. Raju who is totally against the concept of marriage agrees on Muthiah’s insistence. Both marriages take place.

When the newly married couples reach home, Latha welcomes them, which the relatives think as inauspicious and they influence Mangalam who behaves badly that night itself, which upsets Raju.  Jeeva and Thara convince a reluctant Ramaiah to start his own business. They conspire with Mangalam and demand partition of the family’s wealth. Muthiah gets upset and agrees to divide the wealth and Mangalam agrees to it without consulting her husband.  Muthiah gives his wealth away to his brothers and moves to Kanchivaram village with his family, Chinnaiah, aunt, and Latha.  Jeeva steals cash from Ramaiah’s business leading to its collapse. Shocked, Muthiah settles the loans with Santha’s jewels in order to avoid a bad name for his company.

Raju, disappointed with Mangalam, discontinues his medical studies and turns a  drunkard. Santha comes to know, meets, and reforms him and he joins the military. Meanwhile, Latha who considers her as a burden to her sister’s family returns to her elder brother-in-law’s (A. Karunanidhi)  house. Chinnaiah, in love with her, is disappointed and leaves to Mumbai for work. Latha is treated badly at her in-law's place and Babu (Chandrababu)  their son is her only support. Muthiah meets with an accident and falls very sick. Santha does not have money and when she sends her son to get money,  Jeeva does not help.

Meanwhile, Jeeva manipulates  Mangalam to sign some documents and using that takes possession of her home and throws her out. Mangalam realizes her mistake and apologies to Muthiah and Santha and they accept her into the family.  Santha sends a telegram about  Muthiah’s health to his brothers.  Chinnaiah returns from Mumbai and meets his uncle on the same train who is returning after months from Kasi. His uncle understands how his children have spoilt Muthiah’s family and punish them for not understanding the value of a joint family. Both accept their mistakes.

They travel to meet Muthiah who is very sick by then. In his death bed,  he tells Santha to get Chinnaiah married to Latha and then dies.  Raju returns and is shocked to know about the death of Muthiah. He accepts Mangalam back on Santha’s advice. Chinnaiah marries Latha with Santha’s blessing and they all live happily together. 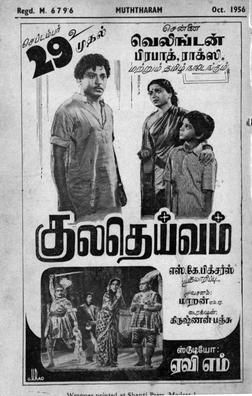