Sekar (Jaishankar), Sundaram (Nagesh), and Sathya Bhama or Bhama (Jamuna) are classmates in a college in Madurai. Sekar, the college topper has a soft corner for Bhama, the only daughter of Ramalingam (Major Sunderrajan) and Alamelu (G. Varalakshmi), the owners of Alamelu Bus Company. While Ramalingam maintains a low profile, Alamelu is a proud and class conscious lady, who manages her home and the business with an iron hand. Due to Alamelu's influence, Bhama grows up as an arrogant and proud girl. Sekar and Bhama fall for each other, with the help of Sundaram, who plays a catalyst. When Alamelu learns about this development, she objects, as Sekar is surviving with the scholarship provided by Ramalingam as a token of gratitude for the help received from Sekar's grandfather. Though Sekar decides to stay away from Bhama, at the insistence of Bhama, Alamelu agrees for the wedding after thoroughly grilling Sekar and finding him to be intelligent and smart. After the wedding, Sekar moves into Bhama's house. He starts working at Alamelu Bus Company as the Manager but feels suffocated with a lack of power to decide or to handle finances.

A year passes and Bhama delivers twin girls. Sekar finds it extremely difficult to work under Alamelu. Alamelu insulting Sekar's guests at an official function becomes the last straw on the camel's back and Sekar decides to move out of the house with his wife and children and asks Bhama to pack up. As Bhama hesitates and tries to pacify Sekar, Alamelu interferes and pushes Bhama into a room. Bhama falls down while being pushed and faints. Not knowing this, Sekar keeps knocking and banging the door asking Bhama to come out and leave the house with him. He misunderstands the silence as her reluctance to accompany him and walks out of the home with one of the twins and travels to Singapore. He struggles for some time without a job there, but when he saves a rich man's daughter, he gets a job and later becomes a partner to his employer. Bhama longs for her husband and daughter and releases several advertisements in papers with no avail.

Few years pass by and the girls grow up. Sekar shifts to Madurai and gets his daughter Puppy or Padmini (Baby Padmini) in the same school of Lally or Lalitha (Baby Padmini again) his other daughter raised by Bhama, studies. Though their appearance is similar and both are intelligent, they are chalk and cheese. While Puppy is disciplined and humble, Lally is proud and arrogant due to her grandmother's influence. Sekar appoints Nirmala (Santha) as a dance teacher for Puppy. Nirmala and her mother Sogusu (TA. Mathuram) scheme to take advantage of Sekar's loneliness.

Sundaram, who is unemployed joins Sekar. Sundaram takes good care of Puppy and tries to unite Bhama and Sekar. Nirmala and Sogusu tactfully move into Sekar's house. Puppy and Lally often fight at school and when they fight during an excursion, their teacher locks them in a room for a whole night, which helps them to start liking each other and also realize that they are in fact, twins of the same parent.

When Puppy is away on an excursion, Sekar falls ill and Nirmala serves him alcohol instead of medicine and he gets addicted. When Sekar is in an inebriated condition, Nirmala seduces him and brings him very close to her. The next morning, Sogusu finding Nirmala and Sekar in a compromising position creates a ruckus. Though Sekar is unable to recollect the previous night's happenings, to save Nirmala from disgrace, promises to marry her.
Puppy and Lally who long for their mother's and father's love respectively, decide to change places taking advantage of their similar appearance and Puppy goes to Bhama as Lally and Lally come to Sekar as Puppy when they return from the excursion. Their behavior at the new places surprises the elders and Sundaram finds out the truth but promises to support.

Sekhar tries to convince Lally disguised as Puppy about his marriage to Nirmala and every time the issue is raised, she refuses. When Sundaram tries to expose Nirmala, Sekar slaps him. Lally gets upset and demands that Nirmala gets out of the home. This irritates Nirmala, who pushes Lally out resulting in her fainting. Sekar reprimands Nirmala and rushes to the hospital with Lally. Sundaram informs Puppy about the incident and when Puppy cries on getting this news, Ramalingam and Bhama learn that the girl in their house is Puppy and not Lally and the girls interchanged their positions. Inspite of Alamelu resisting, Ramalingam and Bhama rush to meet Lally. Bhama on seeing Sekar falls at his feet and begs forgiveness. However, Sekar does not yield and tells her that he is rich enough to take care of both his kids and throws Bhama out. He locks the girls in a room and Bhama refuses to leave and waits outside Sekar's home. The girls pray to God to unite their parents and suddenly remember Sundaram's suggestion that praying at Palani temple would be very effective. They plan to go to Palani and Sogusu, overhearing this conversation, feels that it is a great opportunity to get rid of the kids, and helps them to escape and also hires a professional killer to finish the girls at the temple town.

The next morning, Sekar realizes that Bhama is still waiting outside his home, and inspite of Sundaram pleading with him to accept Bhama, he refuses. When he returns home, he overhears a conversation between Nirmala and Sogusu and understands their manipulation of his relationship with Nirmala and their present plan to get the children killed to usurp his wealth. He gets shocked and beats the mother and daughter and pushes them out of his house. He regrets his mistake of not trusting Bhama and with her, he rushes to Palani to save the kids. The kids are saved on time and the family unites. The kids prove that they are wiser than adults through their acts. 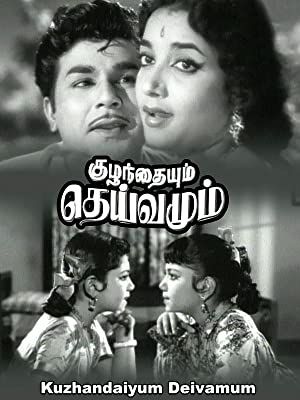