Menaka, a trendsetter, was the movie version of the successful play by TKS Brothers (one of the biggest names in  Tamil theatre); the play was adapted from a best-selling novel by Tamil detective fiction writer Vaduvoor K. Duraiswamy Iyengar. Menaka was also the first Tamil novel to be staged and then made as a film successfully.

Menaka is about a loving couple who get separated due to the evil designs of some envious persons, and their reunion after much anguish and anxiety. Young advocate Varahaswamy (T.K. Bhagawathi) is married to Menaka (M.S. Vijayaal),  daughter of Sambasiva Iyer (T.K. Sankaran), a Deputy Collector. Varahaswamy’s widowed sisters Perundevi (T.K. Muthuswamy in a lady’s role) and Padma  (P.K. Diwakar in a lady’s role), along with another relative Sama Iyer (N.S.  Krishnan), create discord and trouble in their marital life. To get rid of Menaka and at the same time make Varahaswamy remarry, they sell her off to a wicked person Naina Mohammed (T.K. Shanmugam) for Rs. 5,000/-. When Naina tries to rape her, Menaka attempts to kill herself to save her chastity. She is rescued by Naina’s kind-hearted wife Noorjehan (K.T. Rukmani) who takes her to her father Periyathambi Marakkayar (who is a member of the Governor Council of the State) for protection. Menaka gets into depression with her life and her father Sambasiva Iyer gets her hospitalized.  To avoid any suspicion, Varahaswamy’s sisters inform him that Menaka has eloped with a stage actor. To make him believe their story, they place a  photograph and two letters supposed to have been written by the actor in her suitcase. Varaha Swamy believes them, gets depressed about his wife deserting him, and becomes mentally unbalanced. Once, when he is walking on the beach,  he notices Menaka traveling in a car with Noorjehan. He misunderstands that  Menaka is traveling with her eloped lover and follows her car to kill her with a  stone. However, he meets with an accident with another car and is admitted to a hospital. By coincidence, it is the same hospital where Menaka is getting treated. Menaka comes to know that her husband is in the same hospital and using Marakkayar’s influence, she takes care of him in the disguise of a nurse.  Using this opportunity, she tries to establish her chastity to Varahaswamy.  Marakkayar’s man Samaya Sanjeevi helps to expose Sama Iyer and Perundevi’s evil plans to Varahaswamy, who realizes his mistake of misunderstanding his wife.  He recovers soon, leaves his sisters, and joins his wife and lives in marital bliss.

Menaka was N.S.  Krishnan’s first movie, for which he was paid Rs. 600/- as remuneration.

The passionate kissing scene between Naina Mohamed  (T.K. Shanmugam) and Noorjehan (K.T. Rukmani), the first such scene in Tamil Cinema, created a sensation and was the talk of the town at that time. In that scene, T.K. Shanmugam passionately kisses K.T. Rukmani 12 times,  commencing from her right hand till the shoulder. This scene was enacted by the filmmaker Raja Sandow as T.K. Shanmugam was initially hesitant to act in this scene.

Menaka earned its place in the history of Tamil Cinema as the first film to portray a contemporary theme, known in Indian movie parlance, as a ‘social’. Till 1934, 27 talkies were made in Tamil, all based on mythology or folklore. No film based on contemporary life was brought out by filmmakers. In 1935, for the first time, two films (Dumbachari and Menaka) based on social subjects, depicting the society and its conditions, were made and released. Though both are categorized by historians as the first social films, it is Menaka which is considered to have established the trend for social films in Tamil Cinema as it reached a wider audience and won more recognition. 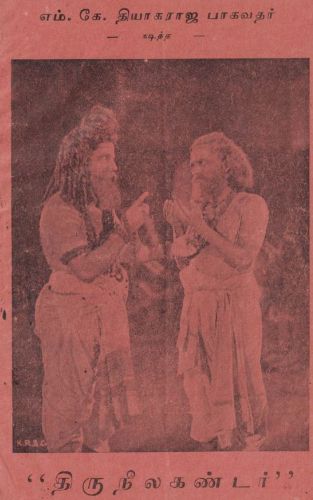