Ramasamy Pillai (K. Sarangapani) and banker Shanmugam Pillai (V.K. Ramasamy)  are partners in a black marketing business. An aged Ramasamy Pillai desires to marry his partner’s daughter Kannamma (T.A. Jayalakshmi), for which his sons  Jayakumar (B.R. Panthulu), Sukumar (T.R. Mahalingam), and daughter Kamala  (Baby Kamala) object. When their father insists he will marry Kannamma, the sons and daughter leave his home to reside in their grandfather’s ancestral home. For the sake of combining their wealth, Shanmugam Pillai approves of this marriage. Trusting him, Ramasamy gives his share of their business profit to  Shanmugam.

Shanmugam Pillai’s daughter Kannamma falls in love with Sukumar, son of  Ramasamy Pillai. However, her mother wants Kannamma to marry her brother  Viswam (T.K. Ramachandran). Sukumar lives with his brother and sister and follows his brother’s advice in all matters. When Kannamma refuses her uncle  Viswam’s marriage proposal and expresses her desire to marry Sukumar,  Viswam gets angry and decides to prevent it. He befriends Sukumar and introduces him to friends like Gnanodayam (T.R. Ramachandran) who have various vices. Viswam’s friends slowly influence Sukumar to drink and smoke.  They also instigate him into believing that his brother Jayakumar is pretending affection to usurp the joint property but has no real love for Sukumar. Under the influence of alcohol, Sukumar tries to steal money from home.

When Jayakumar admonishes him,  Sukumar angrily, demands division of the ancestral property. Upset,  Jayakumar hands over his share of the property. Sukumar takes it and leaves the ancestral home.  Sukumar now lives alone. With his newly attained wealth and freedom, misguided by his so-called friends, he starts a film production company  Yellow Pictures and begins a film titled Veera Hanuman.  His friends misguide him that he can begin making a film with one lakh rupees and the balance requirement can be borrowed. He borrows one lakh from financiers and starts the film. However, the film does not take off and within a short period of shooting, the entire money is spent. The financiers come to know that the film is stuck for want of funds and demand repayment of their loans.  When Sukumar is unable to repay, they get him arrested and jailed. His brother Jayakumar again comes to his rescue,  settles Sukumar’s loans, and gets him released.  Sukumar comes home, apologizes for his mistakes and the brothers live together again.  Meanwhile, the partners  (Ramasamy and Shanmugam) have a dispute on profit sharing; Shanmugam cheats Ramasamy by not sharing the unaccounted profits with him. Shanmugam further infuriates his partner by refusing to permit Ramasamy to marry his daughter Kannamma.

When Jayakumar comes to Shanmugam seeking permission for his brother Sukumar’s marriage with Kannamma, he is treated badly and sent away. Sukumar comes to meet  Kannama and expresses his concern about her father’s refusal. When Shanmugam overhears their discussion, he beats and throws Sukumar out, who gets upset and leaves.  Meanwhile, the government announces the demonetization of Rs. 500 and Rs. 1000 currency notes. Shanmugam, who has many such notes, gets devastated, leaves his home in a  daze, and is stabbed to death by someone.  Kannamma thinks that Sukumar killed her father in a fit of rage, weeps and removes the knife from her father’s wound. Sukumar returns, see Shanmugam’s corpse, and thinks that Kannamma (holding the murder weapon)  killed her father. Both Kannama and Sukumar confess to this murder. The next day, Jayakumar appears in court.  To save his brother, he also claims to be the murderer.  However, in the end, Ramasamy Pillai (to save his sons for being convicted for his crime) surrenders to the court and explains why he killed Shanmugam  Pillai who cheated him in his business.  He also submits proof and convinces the court. Sukumar and  Kannamma marry and live happily with his brother’s family.

The film was based on the play ‘Thyaga Ullam’ (which was based on the story of the 1936 film  Iru Sahodhargal) written by Pa. Neelakantan and directed by Sahasranamam. For many years a successful play of the NSK Drama Company, much of its original stage flavour was retained when it was made into a film. It was shot in a make-shift studio in Karaikudi where this film company had moved in the wake of the war. Painted backdrops and cut-out trees added to the “staginess”. Characters spoke chaste and cut-out trees added to the “staginess”. Characters spoke chaste (the written form) Tamil and the dialogues were pedagogic. There were no outdoor shots at all except the one showing lovers riding bicycles outsides the sets but within the studio compound.

This film, the last of the genre of patriotic films was made on the eve of India’s Independence. By 1945, after the formation of a popular government in Madras, political censorship had been lifted and nationalist symbols became saleable commodities in films. In this film, characters used “Jai Hind” to greet each other, and portraits of nationalist leaders were shown, one after the other. It opened with poet Bharathi’s death anniversary and ended with the 77th birthday celebrations of Gandhi.

After a series of mythological, this film with a contemporary theme dealing with issues like black marketeering and price-rise was received very well. This was also the first Tamil film which showed actual sequences of film shooting as part of the narrative. The film was a modified version of the earlier, Iru Sakodaragal. Vijayakumar and Sukumar, sons of rapacious black marketeer protest when their father plans to marry a young girl. Sukumar is in love with Kannamma, daughter of a business associate of his father. He falls in evil ways, gets the family property divided, and squanders his share of the money in making a film. He comes back in the style of the prodigal son and is accepted by his brother. The devaluation of currency hits the black marketeer who kills his partner and is imprisoned. Sukumar marries Kannamma.

Naam Iruvar was highly appreciated for its superb songs and dance numbers. The main draw of the film was poet Bharathi’s nationalist songs; the producers had bought the copyright of these songs for 10,000 rupees from Messrs Surajmal & Company, a recording concern. The heroine is called Kannamma, after the subject of many of Bharathi’s love poems. Kamala, who plays the character of the same name, as the younger sister, dances on drums for Bharathi’s famous song Kottu murse (Let the drum sound). This dance incidentally was the precursor to the famous drum dance in Chandraleka. During this dance, in what was supposed to be a stage performance, two images of Kamala were shown.  The songs ‘Aaduvomey Pallup Paduvomey...’  and ‘Vetri Ettu Thikkum...’ by Baby Kamala.  The other popular songs were ‘Kodaiyil  illaipari...’, ‘Solai malaroliye...’, ‘Vennilavu  Nee Enakku...’ and ‘Igha vazhvinile.kanum  inbam...’ became very popular. 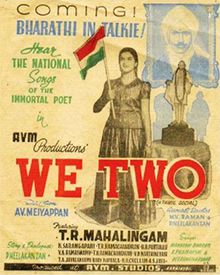 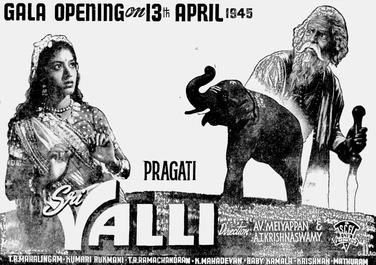