Nandan (M.M. Dhandapani Desikar), a pariah (untouchable) by caste, is a simple farmer. He is the bonded slave of a Brahmin landlord Vedhiyar (Serukalathur  Sama), who is an ardent devotee of Lord Shiva. Vedhiyar’s assistant Jambu  (Narayana Rao) treats the slaves badly. However, Vedhiyar has a soft corner for  Nandan for his devotion and disciplined way of living.  Nandan, who lives with his mother, prays to Lord Shiva all the time and propagates good living by praising the Lord to his fellow villagers. Valluvan (M.R.  Swaminathan), a priest at the village Karuppannasamy temple, gets angry with  Nandan’s propaganda on Lord Shiva. When Valluvan and the villagers try to sacrifice goats at the local temple festival, Nandan stops them and convinces them that animals are also like human beings, so no God will demand animal sacrifice. Nandan explains the greatness of Lord Shiva; when other villagers want to see the Lord, he takes them to have His darshan at Tiruppankur.

Nandan and the villagers are grieved when the Nandi statue blocks the view of Lord Shiva there. Nandan sings in praise of the Lord, the statue miraculously moves aside and Nandan and the villagers get a darshan of the Lord. The word spreads on the power of Nandan’s prayer; more villagers join him and start chanting Lord Shiva’s name. Valluvan gets upset and complains to Vedhiyar about  Nandan’s behavior of converting the villagers and stopping the sacrifices.  Vedhiyar calls Nandan and warns him to stop such activities. However, Nandan seeks Vedhiyar’s permission to go to Chidambaram to see Lord Nataraja which is his long-cherished dream.  Vedhiyar refuses and instead,  forces him to work even more on the farm.

Nandan works on the farm mechanically without even eating for many days with the hope of getting permission to go to Chidambaram. He keeps singing in praise of Lord Nataraja,  joined by other workers in the field.  Finally, to put him in his place,  Vedhiyar permits him to go to  Chidambaram with the condition that he can go only after cultivating the crop in 40 acres  (veli) land. Nandan is shocked by this impossible condition and pleads with the landlord to reconsider. However, Vedhiyar refuses and insists that  Nandan can go only after cultivating the entire vast area. Nandan gets dejected, chants Lord Shiva’s name, and faints.  Lord Shiva comes to his rescue and cultivates the entire land overnight.

The next day, this miracle in the village astonishes everyone.  Vedhiyar realizes his mistake, understands the power of Nandan’s prayer, falls at his feet, seeks his forgiveness, and allows him to go to Chidambaram. Nandan goes to  Chidambaram but remains outside the temple as, being an untouchable, he cannot enter it. At night, Lord Shiva appears in the dream of the Chidambaram temple priests and informs them that Nandan has come to see Him, is waiting outside the town, and orders them to bring him to the temple. The priests locate Nandan and ask him to accompany them to the temple. When he is about to enter the temple, a few  Brahmins in the gathering object to a pariah entering the sacred temple. The priests then decide to carry out the fire ritual by which Nandan has to go through fire to clear his pariah status. The sacred fire is prepared; Nandan goes around the fire, and with the Lord’s name on his lips, walks into the fire. He emerges from the fire with a new holy body,  with sacred ashes smeared all over and the holy thread. He is taken inside the temple by the priests. He worships Lord  Nataraja, then disappears and unifies with the Lord. Nandan’s prayers to be with Lord Shiva are finally answered. 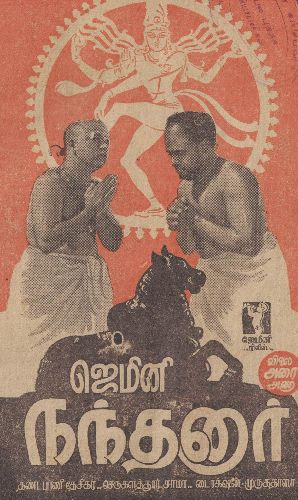