Vimala and Nirmala are daughters of Sankaran, a fisherman who has lost his wife. They live with Sankaran’s sister Kalyani in a small hut. Sankaran dies while he is at sea, and the family is left to their means. Nirmala starts selling fish in the market, but she is constantly harassed by local goons on her way to work. She then starts a small bakery in front of her hut.

Unlike her sister, Vimala grows up greatly drawn to luxuries and comforts. When she sees a sari she likes in a shop, she compels her sister to buy it for her. One day while returning from the city, Vimala falls into a sewer and is bedridden. Feverish and delirious, she constantly asks for the sari. To fulfil her sick sister’s wish, Nirmala goes to the shop, but she is unable to afford the expensive sari. A disheartened and helpless Nirmala tries to steal the sari, but she is caught and handed over to the police.

A young police officer, Raghu, feels sorry for her and buys the sari for Vimala. Vimala dies soon after, however, and Nirmala is sent to prison. She is devastated to hear of her sister’s death when she is released, but comforted that her last wish was fulfilled by Raghu. Raghu and Nirmala grow closer to each other.

Nirmala is appointed as the music instructor for a rich young woman, whose brother Balan falls in love with her. His mother, on the other hand, wants him to be married to another woman, Sumithra. Saddened when he finds out that Nirmala’s affections belong to Raghu, Balan decides to marry Sumithra. Meanwhile, Raghu is tormented by his fears that Nirmala will leave him for the rich Balan. Ultimately, the air is cleared and Nirmala is married to Raghu.

The fourth Malayalam film to be released, Nirmala occupies a significant position in the history of Malayalam cinema. It featured a number of Malayali artists in all the departments. It was also the first Malayalam film to use playback singing. Set in the local milieu, Nirmala is credited with breaking Malayalam films away from dominant Tamil sets and theatrical influences. 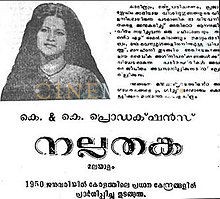