RANJAN
The swash-bucking idol of CHANDRALEKHA and NISHAN. Dashing Lover, Prince and an outlaw. Ranjan has given his incomparable performance again in - NISHAN DANKA under the able Director JAYANT DESAI (The Box office Magician).

SHYAMA
The alluring excitement girl of the year, cast in a role that will give you heartbeats. Her performance especially  in NISHAN DANKA with Ranjan will be unique among all pictures in which she has acted till now.

JEEVAN
The one and only one character artist of Indian Screen JEEVAN has shown a new technique of SWORD FIGHTING and his thrilling performance in NISHAN DANKA will be ever remembered by all.

NISHAN DANKA is passed on a carefully selected story with gorgeously sets and costumes of a ...... full of Palace intrigues, adventure, gaiety, dance and music.

NISHAN DANKA is produced for the market of today for big and small houses, for young and old, for all presenting a new mark of merits in entertainment.

NISHAN DANKA is directed by Jayant Desai, a name that has more silver jubilees to his credit than any other director in the film industry.

Music Director: Basant Prakash. The music of NISHAN DANKA will be the another highlight of this picture. Basant Prakash - at last shown his real talent in NISHAN DANKA by this he will get the real fame - the son of greatest musician (late) Khemchand Prakash.

And lastly "NISHAN DANKA" has been censored by the Bombay Board of Film Censors for Universal Exhibition. 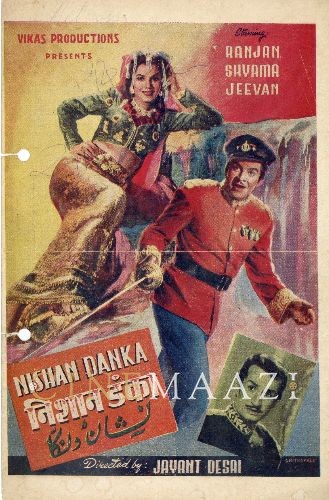