PRK, a man jilted by a doe-eyed beauty, goes about killing beautiful girls who come to a picnic near his mansion. Reminiscent of Hitchcock's Psycho (English, 1960), the film has other motifs also woven into it. The woman-killer has links with a local politician who heads a mafia-like gang. A doctor helps him in his nefarious deeds—different from the usual screen depiction of doctors as ministering angels. An archetypal police officer—invincible, honest, and a tireless defender of the rule of law—is after them. The editor of a daily, who talks about the role played by The Washington Post in the Watergate scandal, vows to expose the truth behind the murders. His band of men supports the police officer. After much bloodshed and killing, the evil man is shot and the gang is arrested.

The thriller as a genre is uncommon in Tamil cinema and the difference between a detective story and a thriller is often blurred. Though this film was a thriller, the conventional songs and dances were included, serving as interruptions and thus destroying the momentum of the narrative. Visual narration in a thriller has to be precise and clear; otherwise, the audience is left guessing. Here, the filmmaker often fell back on verbal narration; for instance, when PRK tells the editor at the end why he turned a maniac.

The film focusses on violence in political life. The sequences in which the politician's gang storm the daily's office is an allusion to similar real-life incidents in Tamil Nadu. The song the editor sings after the attack, to inspire confidence among his workers, is often used in political and trade union processions.

This cinemascope film is described in the credits as "A film by film students". This was a rare occasion when a group of qualified film technologists came together to make a film. Though this is evident in the use of ambiance sound, silence on the soundtrack, hand-held camera and sophisticated lighting techniques, the content of the film was very much conventional, with crutches like semi-nude dances and composed fight sequences.

In fact, the basic tenor of the film was violent, with many gory scenes. There were eight murders, shown in graphic detail. In the last scene, the police officer, using his pistol for the first time in the film, slugs four bullets into PRK, in a stylized slow-motion action and therefore, the emergence of stylized fights as an ingredient of filmic entertainment is very evident in this film. 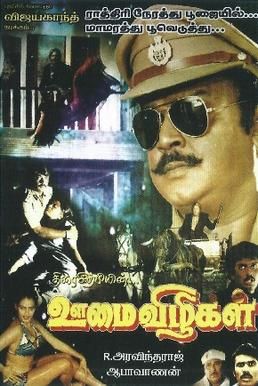